US has more known cases of coronavirus than any other country 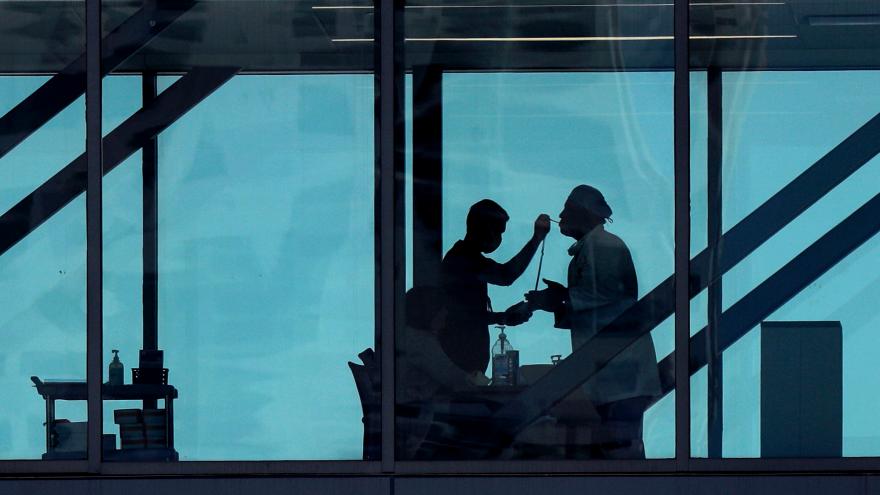 (CNN) -- The United States now has the highest number of known cases of coronavirus in the world with more than 81,000, according to CNN's tally of cases reported by health officials.

The US cases piled up Thursday, surpassing China and Italy. The per capita rate of cases varies because of the countries' vast differences in population.

As of Thursday evening, the United States had at least 81,836 cases while China was reporting 81,782. There have been more than 510,000 cases reported worldwide. The countries' numbers are changing constantly and both the totals and the rank order of countries could change at any time.

The grim milestone comes just as US officials said there was a new high for fatalities reported in a single day.

At least 237 new deaths were reported Thursday, bringing the total number of deaths nationwide to at least 1,186.

The spike of cases has hospitals around the country scrambling to keep up with the demand for care.

In New York, where more than half of the US cases have been reported, exhausted hospital workers are turning to increasingly desperate measures to combat the virus.

A registered nurse described what she has experienced inside a Long Island hospital and the toll that caring for coronavirus patients is taking on health care workers.

"I haven't slept because my mind won't shut off. I cried in the bathroom on my break, as I peeled off the PPE from my sweaty self, mask indentations on my face. I cried the entire ride home," the nurse wrote in a social media post.

The nurse, whom CNN is not naming, says patients are streaming in with "non stop coughing, sweaty, fevers" and with "fear in their eyes."

"I cry for the ones who passed away. I cry because we intubated 5 patients within 10 min and im terrified. I cry for my co workers, because we know it will get worse and I already feel like that is impossible and we are already at our breaking point, I cry for the parents, children, siblings, spouses who cannot be with their loved ones who may be dying but cant have visitors because there is no visiting allowed," the nurse added.

Chicago and Detroit could be next new hot spots

Outbreaks in New York, Washington and California have captured the nation's attention for weeks -- but some health officials predict areas of Michigan and Illinois could be the next epicenters of the crisis.

Birx noted that 40% of the country has "extraordinary low rates" of coronavirus" About 19 states have fewer than 200 cases, she said.

Louisiana, which has seen coronavirus cases climb this week, is already emerging as another hot spot. New Orleans is facing critical shortages of ventilators and protective equipment, an official told CNN Thursday.

"This is going to be the disaster that defines our generation," Collin Arnold, director of the city's Homeland Security and Emergency Preparedness, said.

Health officials said they are monitoring six nursing homes in the state, including the 268-resident Lambeth House Retirement Community in New Orleans, where 11 deaths were reported on Tuesday.

Numerous hospitals expect to run out of beds within two weeks, as cases continue to rise.

If more beds don't become available, "then we don't have resources to save the lives that we need to save," former Louisiana Secretary of Health Dr. Rebekah Gee said. "That's why these stay-at-home orders are so important."

But "we have not seen the peak of the crisis yet," Gee said.

US coronavirus deaths could peak in 3 weeks, epidemiologist says

"I think what's just as concerning is the fact that we need more ventilators," she said. "And that is something that the federal government needs to step in and fix."

Many have called for President Donald Trump to use the Defense Production Act to speed up the availability of critical health equipment.

This week, Trump and the Federal Emergency Management Agency (FEMA) gave conflicting information about whether the act was being used.

In an effort to address the desperate need for medical equipment, New York state has approved technology that allows two patients to share a ventilator.

As of Thursday, more than half of US coronavirus cases were in New York state, with more than 37,000, according to CNN's tally of cases reported by state health officials nationwide.

Gov. Andrew Cuomo referred to the method as "splitting" and said it involves adding a second set of tubes to a ventilator.

"It's not ideal," Cuomo said on Thursday, "but we believe it's workable."

New York hospitals need about 30,000 ventilators and have enough personal protection equipment for only the next two weeks, the governor has said.

Wednesday, the state had 4,000 ventilators in hospitals and another 4,000 on the way from the federal government. New York has also purchased 7,000 ventilators and is "still shopping," the governor said.

The ventilators are the "difference between life and death for thousands of New Yorkers," New York City Mayor Bill de Blasio said.

In San Francisco, Mayor London Breed said her city could see a surge in cases similar to that seen in New York City.

She estimated San Francisco could need as many as 1,500 more ventilators and 5,000 more hospital beds.

"If people who are out on the streets continue to congregate with one another, continue to interact with one another which increases the spread of this virus, we will not have enough beds, enough ICU units, enough ventilators to support the people that we know are going to need them," Breed said.

Across the country, 21 states have issued stay-at-home orders, with some not going into effect until the end of the week.

Georgia and Florida do not have statewide rules, but Atlanta enacted its own stay-at-home order, and Miami announced a nighttime curfew.

People without symptoms are fueling the spread of coronavirus

In Chicago, Mayor Lori Lightfoot announced Thursday that bike trails, paths and green spaces will be closed after crowds were spotted on the city's lakefront.

"Congregating on our lakefront, to be blunt, is going to create a risk that is unacceptable and could lead to death," Lightfoot said. "Dear God, stay home, save lives."

The decision comes after Interim Chicago Police Superintendent Charlie Beck said police will start issuing citations Thursday to residents who do not follow rules around social distancing and staying at home.

Breaking the orders is a misdemeanor punishable by a citation with a fine of up to $500, Beck said. If violation continues, it could result in physical arrest.

Civil fines will be issued to non-compliant businesses, but not to individuals, Cuomo said.

In Los Angeles, Mayor Eric Garcetti said the city also will be enforcing restrictions against non-essential businesses that are staying open.

But Los Angeles police will not stop people for exercising and leaving their homes, Garcetti said.

The widespread shutdown of businesses to try to control the outbreak has led to a record number of Americans filing for their first week of unemployment benefits.

About 3.3 million Americans filed for initial jobless claims during the week that ended Saturday, according to newly released Department of Labor statistics.

That's the highest number of initial jobless claims since the Department of Labor started tracking the data in 1967. The previous high was 695,000 claims filed in the week ending October 2, 1982.

Last week's jump marked a massive increase from a revised 282,000 claims in the prior week.

Some Americans hope a $2 trillion stimulus bill will help, but some analysts say it's not nearly enough.

Hopes that the outbreak could subside by summer might not be realistic, a Harvard doctor said Thursday.

"We are going to be living with this, in one form or another, for 12 to 18 months if we are lucky," said Dr. Ashish Jha, director of the Harvard Global Health Institute.

That time frame refers to how long health officials predict it will take to make a publicly available vaccine.

"Once we have a vaccine that's effective and widely deployed, we can bring the pandemic to an end," Jha said. "Until that time, we are going to continue to have to confront and deal with the virus."

You asked, we answered: Your top coronavirus questions