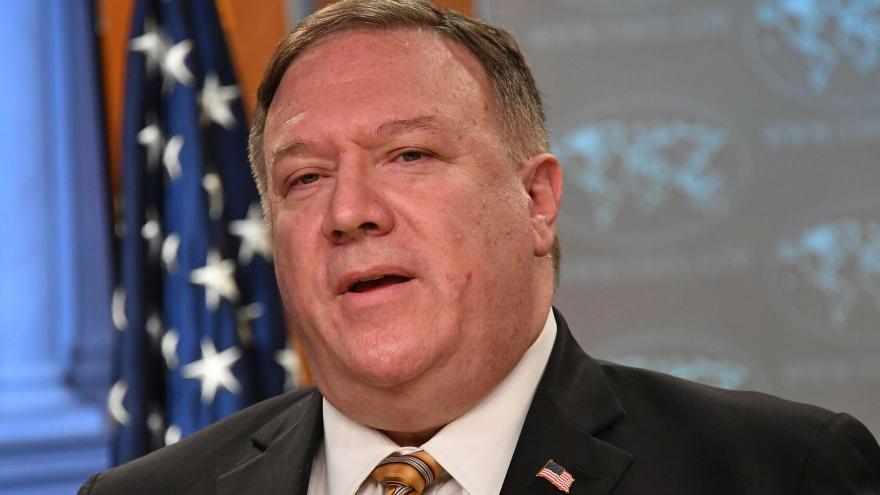 US Secretary of State Mike Pompeo speaks during a press conference at the State Department in Washington, DC on June 24, 2020. US-based senior Chinese diplomats will be required to seek US government permission to engage in a number of routine activities, Secretary of State Mike Pompeo announced Wednesday -- the latest escalation amid worsening tensions between Washington and Beijing.

(CNN) -- US-based senior Chinese diplomats will be required to seek US government permission to engage in a number of routine activities, Secretary of State Mike Pompeo announced Wednesday -- the latest escalation amid worsening tensions between Washington and Beijing.

The top US diplomat said that the "State Department has established a mechanism requiring approval for senior Chinese diplomats in the United States to visit university campuses and to meet with local government officials."

"Cultural events with groups larger than 50 people hosted by the Chinese embassy and consular posts outside our mission properties will also require our approval," Pompeo said at a news conference at the State Department. "Additionally, we're taking further steps to ensure that all official PRC embassy and consular social media accounts are properly identified as government accounts, Chinese government accounts."

As with other recent actions against China, Pompeo claimed the administration had undertaken the move in the name of reciprocity.

"We're simply demanding reciprocity. Access for our diplomats in China should be reflective of the access that Chinese diplomats in the United States have, and today's steps will move us substantially in that direction," he said.

In a separate written statement, he added, "Should the PRC eliminate the restrictions imposed on U.S. diplomats, we stand ready to reciprocate."

Wednesday's announcement escalates a previous move from last October, which required Chinese diplomats to report in advance any official meetings and visits with state officials, local and municipal offices, educational institutions, and research institutions in response to restrictions faced by American diplomats in China.

"In China, U.S. diplomats do not have unfettered access to a range of folks that are important for us to do our job there. That includes local and provincial-level officials, academic institutions, research institutes, so on and so forth," a senior State Department official said at the time.

Senior officials at the time stressed that Chinese diplomats were not required to ask permission for these visits, only that they have to report these visits to the State Department.

The Chinese Embassy in Washington, DC condemned the new restrictions, claiming they were a violation of the Vienna Conventions on Diplomatic Relations and Consular Relations.

"With the excuse of reciprocity, the US has imposed yet another unjustified restriction and barrier on Chinese diplomatic and consular personnel," an embassy spokesperson said. "We urge the US side to correct its mistake, revoke this decision and provide support and facilitation for Chinese diplomatic and consular personnel in the US to perform their duties as well."

Relations between the US and China have plummeted as Beijing and Washington have taken a series of retaliatory measures over the past several months.

Last month, the State Department designated a Chinese cultural and educational institution -- the Confucius Institute US Center -- as a foreign mission.

Earlier this year, they designated a number of Chinese media organizations as foreign diplomatic missions, arguing that they are under the control of the Chinese Communist Party.

China has expelled journalists from The New York Times, The Wall Street Journal and The Washington Post.

The US ordered Beijing to shutter its consulate in Houston in July after US officials alleged it was part of a larger Chinese espionage effort using diplomatic facilities around the country.

The activities of consulate officials in Houston "are a microcosm, we believe, of a broader network of individuals in more than 25 cities that network is supported through the consulates here," a US Justice Department official told reporters at the time.

In response, the Chinese government ordered the closure of the US consulate in Chengdu.