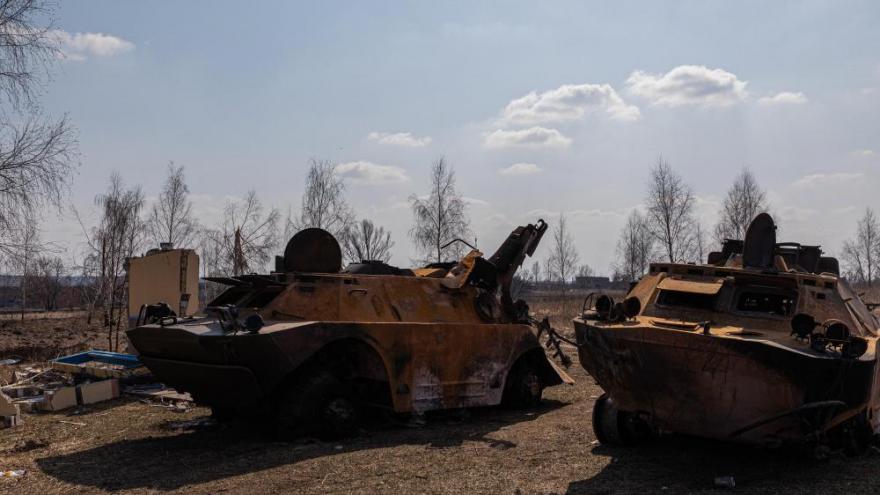 (CNN) -- Russia is beginning to withdraw some forces from the area around the Ukrainian capital city of Kyiv in what the US assesses as a "major" strategy shift by Moscow, two senior US officials tell CNN.

The Russian forces now pulling back in some areas of the north will focus on gains in the south and east. The US is already observing these movements underway, including Russian Battalion Tactical Groups leaving the surrounding areas around Kyiv.

The Russian Ministry of Defense said Tuesday that it has decided to "drastically reduce hostilities" in the Kyiv and Chernigov directions, Russian Deputy Defense Minister Alexander Fomin said according to state media RIA.

The US assesses Russia will cover their retreat with air and artillery bombardment of the capital, one of the officials said. US officials caution that Russia could always reverse again if the battle conditions allow.

When taking questions from reporters later Tuesday, Biden said time will tell on what to make of the claim that Russia is reducing its actions around Kyiv.

"We'll see. I don't read anything into it until I see what their actions are. We'll see if they follow through what they're suggesting," Biden said when asked whether Russia appearing to scale back its military operations in Kyiv is possibly a sign that the war coming to the end or if it was Russia trying to buy time.

Biden also noted in his call Tuesday morning with European leaders that was a "consensus" among the leaders to "let's just see what they have to offer. We'll find out what they do."

In the US view, this is not a short-term adjustment to regroup, but a longer-term move as Russia comes to grips with failure to advance in the north. The official said one consequence the US is concerned about is keeping the European allies unified on economic pressure and military support as Washington expects some of them to press Ukraine to accept a peace deal to end the fighting.

Secretary of State Antony Blinken on Tuesday cautioned that Russia saying it would be reducing hostilities around Kyiv could be "a means by which Russia once again is trying to deflect and deceive people into thinking it's not doing what it is doing."

"If they somehow believe that an effort to subjugate 'only' -- in quotation marks -- the eastern part of Ukraine and the southern part of Ukraine can succeed, then once again they are profoundly fooling themselves," Blinken said at a joint press conference with Moroccan Foreign Minister Nasser Bourita.

Brig. Gen. Kyrylo Budanov, the head of Ukraine's Defense Intelligence Agency, said Russia's operations around Kyiv had failed and it was now impossible for the Russian army to overthrow the Ukrainian government. Putin's war was now focused on the south and the east of the country, he said.

"There is reason to believe that he is considering a 'Korean' scenario for Ukraine. That is, [Russian forces] will try to impose a dividing line between the unoccupied and occupied regions of our country," Budanov said. "In fact, it is an attempt to create North and South Korea in Ukraine."

Speaking in Istanbul after talks wrapped between the two sides on Tuesday, Ukrainian presidential adviser Mykhailo Podolyak said there was now a "likelihood" that the two presidents may meet. "We have documents prepared now which allow the presidents to meet on a bilateral basis," he said.

"The Russian delegation is constructive and aware. This doesn't mean that negotiations are easy. They are very difficult. But the Russian side is paying attention to the Russian proposals, to the Ukrainian proposals," he added.

Russian news agency TASS quoted the head of the Russian delegation, Vladimir Medinsky, as saying that the talks were constructive. And he said that "Russia is taking two steps towards Ukraine for de-escalation."

Medinsky said that the Ukrainian proposals were now sufficiently formulated for them to "be presented to the President. And our appropriate response will be given."

A CNN team close to front line in the Eastern part of Kyiv continued to hear intense and frequent incoming and outgoing shelling and rocket launches on Tuesday.