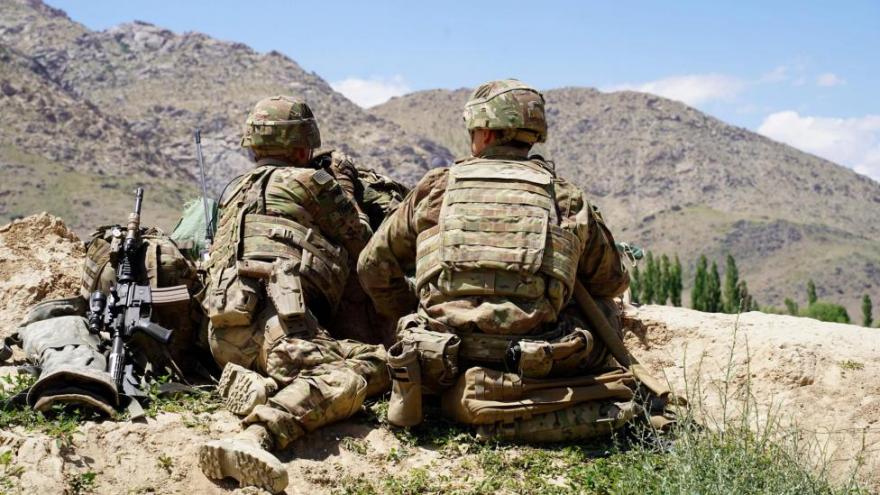 US intelligence agencies assessed that Iran offered bounties to Taliban fighters for targeting American and coalition troops in Afghanistan, identifying payments linked to at least six attacks carried out by the militant group just last year alone, including a suicide bombing at a US air base in December, CNN has learned. In this photo taken on June 6, 2019, US soldiers look out over hillsides in Afghanistan.

(CNN) -- US intelligence agencies assessed that Iran offered bounties to Taliban fighters for targeting American and coalition troops in Afghanistan, identifying payments linked to at least six attacks carried out by the militant group just last year alone, including a suicide bombing at a US air base in December, CNN has learned.

"Bounties" were paid by a foreign government, identified to CNN as Iran, to the Haqqani network -- a terrorist group that is led by the second highest ranking leader of the Taliban -- for their attack on Bagram Air Base on December 11, which killed two civilians and injured more than 70 others, including four US personnel, according to a Pentagon briefing document reviewed by CNN.

The name of the foreign government that made these payments remains classified but two sources familiar with the intelligence confirmed to CNN that it refers to Iran.

The US killed a key Iranian general in Iraq less than a month after the Bagram attack but after a lengthy process involving several agencies to develop options aimed at countering Iran's support for militant groups in Afghanistan. The decision was made in March not to take specific action as officials did not want to jeopardize the peace process with the Taliban, according to multiple sources familiar.

The revelation that Iran might have paid the Taliban follows the controversy over Russian bounties for attacks on American troops, an issue that has been consistently downplayed by the Trump administration in recent weeks.

Russia has denied the allegation.

The lack of public condemnation of Iran or the Taliban and the decision not to pursue a diplomatic or military response also highlights the administration's apparent desire to protect peace talks with the Taliban -- which culminated in an agreement that was signed in February -- at all costs with the goal of helping Trump fulfill his long-stated campaign promise of removing American troops from Afghanistan.

The attack at Bagram, which is regarded as the most prominent US military installation in Afghanistan, was highly sophisticated and rattled officials working on Afghanistan matters because it highlighted vulnerabilities of some of the American compounds, according to one source involved in the Taliban peace efforts.

Specifically, the Pentagon briefing document noted that a suicide vehicle-borne improvised explosive devices (SVBIED) was used in the attack. Roughly 10 Taliban fighters engaged in a firefight with local security forces after the explosion and were ultimately killed by US airstrikes.

That sentiment was also factored into assessments by US intelligence officials from the CIA, Defense Intelligence Agency (DIA), and the National Counterterrorism Center (NCTC) in the days after the attack, according to documents obtained by CNN.

"Based on the nature of the attack and agreed upon bounties," the December attack likely met the criteria for reimbursement, the Pentagon briefing document, which was provided to the Secretary of Defense and chairman of the Joint Chiefs of Staff just days after the incident occurred, states.

While US intelligence officials acknowledge that the Haqqani Network would not necessarily require payment in exchange for targeting American troops, the internal Pentagon document reviewed by CNN notes that the funding linked to the December 11 attack at Bagram "probably incentivizes future high-profile attacks on US and Coalition forces."

Iran has long been known to use proxies for conducting attacks throughout the region but in the months following December's bombing at Bagram, US officials across several agencies were tasked with investigating Tehran's relationship with the Haqqani Network in Afghanistan and developing specific response options.

But despite acknowledging that the relationship "poses a significant threat to US interests," National Security Council officials ultimately recommended in late March that the administration should not take specific steps toward addressing the underlying Iran-Haqqani Network nexus as officials concluded that any response would likely have a negative impact on the peace efforts, according to an internal memo obtained by CNN.

NSC officials also determined that the Afghan government's ability to focus on any issue other than the coronavirus outbreak would likely deteriorate, therefore limiting potential diplomatic options that typically would be available.

While the Trump administration did not take any specific action after concluding its internal review of the link between Iran and the Haqqani Network earlier this year, multiple officials argued that the President has taken a strong stance toward Tehran for its dealings with the Taliban.

A current administration official and former senior official with knowledge of the situation told CNN that Iran's link to the Taliban was cited by US officials as part of the argument for conducting the strike that killed top Iranian General Qasem Soleimani in January.

Still, the issue of foreign governments encouraging the Taliban to resume attacking US and coalition forces in Afghanistan remains a topic of concern for national security officials, according to a joint intelligence assessment produced by the CIA, NSA and NCTC just last month. The assessment notes that Iran reimbursed the Haqqani Network after it conducted at least six attacks against US and Coalition interests in 2019.

Pentagon spokesman Army Maj. Rob Lodewick told CNN that "the Department of Defense does not disclose timelines or discussions surrounding internal deliberations and intelligence briefings," when asked whether top defense officials were briefed on intelligence related to Iran's involvement in specific Taliban attacks but did acknowledge Tehran's efforts to undermine the peace process.

"The administration has repeatedly demanded, both publicly and privately, that Iran cease its scourge of malign and destabilizing behavior throughout the Middle East and the world. While the United States, its NATO allies and coalition partners are working to facilitate an end to 19 years of bloodshed, Iran's inimical influence seeks to undermine the Afghan peace process and foster a continuation of violence and instability," he said.

The Iranian government, the NCTC and the NSC did not respond to CNN's request for comment.

Discussions about a response continued for roughly three months

While working group discussions focused on addressing Iran's payments to the Haqqani Network continued on for roughly three months after the Soleimani strike, some officials involved in the process believed efforts to develop options aimed at countering the relationship were hamstrung by the ongoing peace talks between the US and Taliban, two sources familiar with the process told CNN.

"The object of concern was the relationship because it seemed like one that in any other year would have merited pretty concerted action," a source familiar with the decision-making process told CNN, noting that options like targeted sanctions or even a military response against the militant group in Afghanistan would have otherwise been on the table.

"The overarching element to all of this has been the prioritization of the peace deal with the Taliban and that, even going back to December 2019, was a well-known priority in terms of what the US response would be to a potential incentivized attack backed by a foreign government," the same source said. "On the peace agreement, prior to its publication and even following its publication, it was astonishing the degree to which the Department of State and special representative for Afghanistan reconciliation were in the lead as opposed to the national security council staff."

While top administration officials, including Secretary of State Mike Pompeo, were quick to condemn the December attack at Bagram, there was no mention of any US injuries in the days and weeks that followed despite knowing shortly after the incident that four Americans had been wounded, according to the Pentagon briefing document.

The administration has also never mentioned Iran's connection to the bombing, an omission current and former officials said was connected to the broader prioritization of the peace agreement and withdrawal from Afghanistan.

At the time of the December attack on Bagram, peace negotiations between the US and the Taliban were in a fragile state. Less than two weeks prior, Trump had announced during a surprise trip to Bagram that talks were going to resume after a months-long pause.

A State Department spokesperson declined to answer questions about Iran's purported role in the December 11 attack on Bagram but told CNN that Tehran's "support to some elements of the Taliban has threatened to undermine the peace process in Afghanistan."

"Iran has tried to use proxy groups to carry out the Iranian regime's own nefarious agenda, and it would be a mistake for any faction of the Taliban to get entangled in Iran's dirty work," they added, noting that the Trump administration "remains committed to addressing the full range of threats Iran poses to the US and regional stability. "