US issues new rules restricting travel by pregnant foreigners, fearing the use of 'birth tourism' 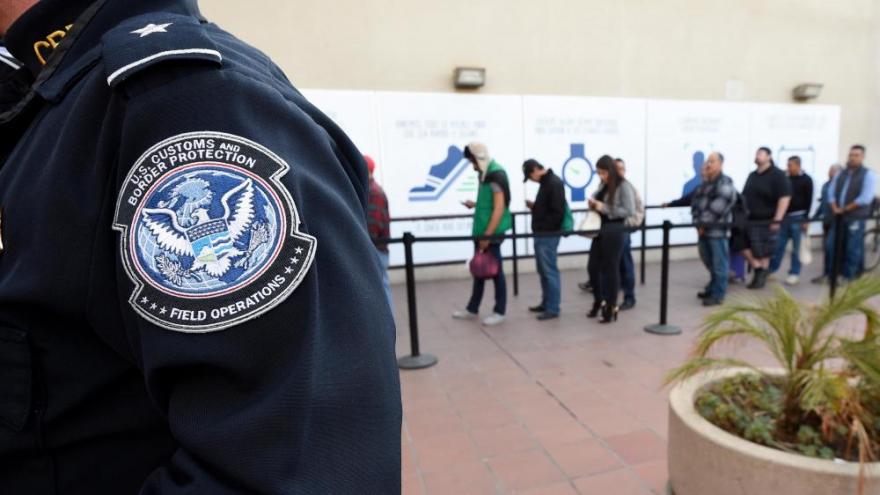 The Trump administration will implement a new policy to make it more difficult for foreign nationals to travel to give birth on US soil to ensure their children become American citizens, a practice commonly known as "birth tourism." In this Dec. 10, 2015, file photo, pedestrians crossing from Mexico into the United States at the Otay Mesa Port of Entry wait in line in San Diego.

(CNN) -- The Trump administration will implement a new policy Friday to make it more difficult for foreign nationals to travel to give birth on US soil to ensure their children become American citizens, a practice commonly known as "birth tourism."

The new rules will be effective January 24, according to a State Department cable obtained by CNN, which was sent on Wednesday to embassies around the world.

The White House announced Thursday that the State Department "will no longer issue temporary visitor (B-1/B-2) visas to aliens seeking to enter the United States for 'birth tourism.'"

Visitors to the US will be denied temporary visas if it's found that the "primary purpose" of travel is for obtaining US citizenship for a child by giving birth in the United States, according to an amended State Department regulation to be published Friday. The rule does not apply to the 39 countries -- most of which are in Europe -- that are part of the Visa Waiver Program, a State Department official confirmed in a briefing call with reporters Thursday.

During that call, the official struggled to explain the specific ways that the new rule would be enforced and its actual effectiveness.

According to the official on the call and the diplomatic cable, consular officers were told they can't directly ask a woman if they are pregnant.

The State Department official said that the "specific articulable reason" for bringing the topic up could be if the applicant says they will be traveling for a medical procedure -- which is one of the options already on the application.

"That would be the trigger for much of this questioning of applicants," they said.

The official did not deny that the officers could use visual cues as part of that reasoning and would not directly say, despite repeated questions, if a consular official could ask a woman if she was pregnant if she looked pregnant. They said officers are not allowed to require a pregnancy test.

Although the White House statement said the rule change was "necessary to enhance public safety, national security, and the integrity of our immigration system," the official could not describe a specific example of a past national security threat that arose as a result of "birth tourism." Instead, they emphasized that the change was "closing a loophole that creates a vulnerability."

CNN reported earlier this week that this policy was expected to be announced soon. A State Department official told CNN that the rule change is intended to address the national security and law enforcement risks.

According to the rule, the State Department does "not believe that visiting the US for the primary purpose of obtaining U.S. citizenship" for a child "is a legitimate activity."

The rule is specific to "B nonimmigrant" visas, which are obtained for temporary visitors for business or tourism.

Additionally, the regulation requires that visa applicants who seek medical treatment in the US must demonstrate their arrangements for treatment and establish their ability to pay all associated costs.

"This is the first recognition that it's not OK to use a visitor visa for the purposes of 'birth tourism,' so it has a symbolic strength in that respect, at the same time it's not a very effective way at going after the 'birth tourism' industry," said Sarah Pierce, a policy analyst at the Migration Policy Institute.

The regulation presents multiple challenges, according to Pierce. It puts consular officers in a "very awkward position of having to decide whether or not they believe someone is imminently going to give birth," she said.

Pierce also pointed out that most people don't admit that they are intending to use a visa for the purposes of gaining citizenship for a child, she said.

In addition, these types of visas are granted for up to 10 years, so someone could apply to come to the US long before becoming or intending to become pregnant, said Pierce.

While the US government does not specifically track 'birth tourism,' the Centers for Disease Control and Prevention publishes annually the number of births in the US to foreign women who reside overseas.

There have been around 10,000 such births every year for the past few years, according to CDC data.

The State Department estimates thousands of children are born in the US to these types of business and tourist visa holders annually, however the department acknowledged it is "challenging" to come up with precise estimates. The State Department official did not have an estimate on how much so-called "birth tourism" cost US taxpayers.

The US has also sought legal action against people thought to be capitalizing on the 'birth tourism' industry.

Last year, the Department of Justice charged three people with running "birth tourism" companies that catered to Chinese clients in Southern California -- the first time that criminal charges had been filed in a US federal court over the practice.

The charges stemmed from a 2015 raid of dozens of "maternity hotels," often upscale apartments, where mothers-to-be paid between $15,000 and $50,000 to give birth in the US, according to a US Immigration and Customs Enforcement statement at the time.

On Thursday, acting ICE Director Matt Albence said his agency would continue to prosecute and investigate "birth tourism" cases, as they've previously done, but didn't comment on any future plans.

"If we have information on groups or intel with regard to people that might be coming, trying to exploit those regulations, we certainly share that information and work closely," he said.

The White House said Thursday the new rule will close a "glaring immigration loophole" and protect the US from the national security risks created by this practice.

By obtaining a child's US citizenship through "birth tourism," foreign nationals are able to help that child "avoid the scrutiny, standards, and procedures" would normally be undergone, if someone seeks to become a US citizen through the naturalization process, according to the State Department.

In 2018, President Donald Trump vowed to end birthright citizenship by executive order, though lawmakers immediately pushed back against his comments.

Tom Jawetz, vice president of Immigration Policy at the Center for American Progress said, the rule "encourages" officials to use their authority "to discriminate on the basis of gender and age by denying a visa based on the possibility that a person might give birth in the United States."

"By creating a 'rebuttable presumption' for people deemed by a single consular officer to potentially give birth while in the United States, the rule would almost certainly make it far harder for women, especially women of color, to come to the United States on tourist or business visas. The bill is only the latest effort by this White House to reshape immigration policy to harm women," he added in a statement.

CORRECTION: This story has been updated to reflect that the new rules will be effective January 24, 2020.

A woman lured a group of deer into her living room. Wildlife officials said she risked the animals' lives

Keeping a plant on your desk can reduce workplace stress, study says

Coors Light wants to give you $100 to adopt a dog