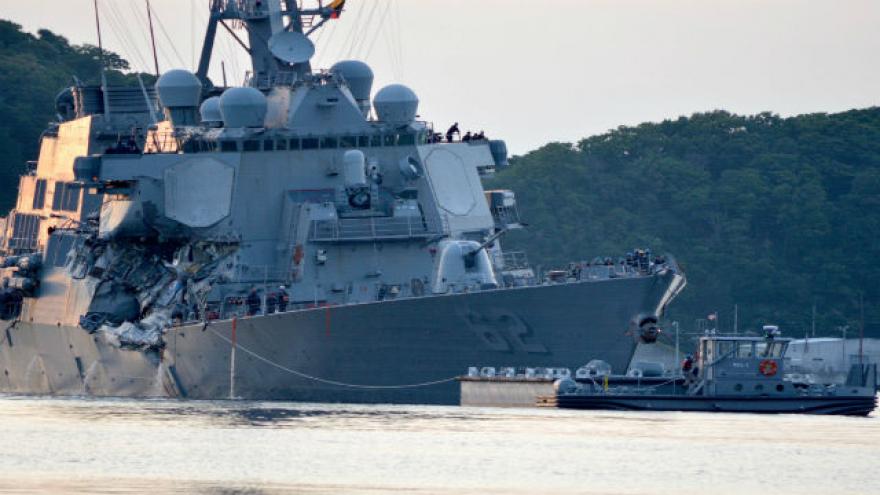 The damaged USS Fitzgerald returns to port in Yokosuka following a collision with a merchant vessel. Photo courtesy U.S. Navy

(CNN) -- The US Navy has released a report concluding that two fatal collisions that resulted in the deaths of 17 sailors during the summer were "avoidable."

In both collisions, the Navy found numerous failures by the crews and commanders of the ships. Those failures included not following standard navigation and seamanship practices, and poor situational awareness of what the ships were facing as they navigated congested seas off Japan and Singapore.

"They were either incredibly complacent or sloppy beyond description," said Carl Schuster, a former US Navy officer who spent 10 years "driving the ships."

The Navy report said the failures that led to the collision were spread among the officers and crew of both ships.

Schuster said long and oftentimes solo deployments by US Navy ships in familiar waters may be part of the problem.

"Ships no longer operate in close proximity to each other. You lose that instinct and concern to ships passing close to you," he said.

In the cases of the Fitzgerald and McCain, "the guys were relaxed and complacent and it burned them," said Schuster, now a Hawaii Pacific University professor.

The crews may have also been fatigued, he said. A US Government Accountability Office report from September warned lengthy deployments of US ships based in Japan, as both the Fitzgerald and McCain were, was a problem as training was being curtailed.

"A ship that spends too much time at sea tends to get an exhausted crew," Schuster said.

And without training time, "perishable skills atrophy," said Schuster. "Ships' crews get a tendency to be good only at steaming from point A to point B. The things that are most dangerous to you are things you're only going to do one percent of the time," he added.

Seven sailors died aboard the guided-missile destroyer USS Fitzgerald when it collided with a cargo ship off the east coast of Japan on June 17.

In Wednesday's report, the Navy found "numerous failures occurred on the part of leadership" and those assigned to stand watch on the ship. There were failures to: plan for safety; adhere to sound navigation practice; execute basic watch-standing practices; properly use available navigation tools; and respond deliberately and effectively to an emergency.

"Many of the decisions made that led to this incident were the result of poor judgment and decision-making of the commanding officer. That said, no single person bears full responsibility for this incident. The crew was unprepared for the situation in which they found themselves through a lack of preparation, ineffective command and control, and deficiencies in training and preparations for navigation," the report said.

The report details the heroism of several crew members risking their lives to help others to safety as water flooded in after a massive hole was ripped into the ship by the collision. One sailor was nearly drowned in the water, losing consciousness when he made his way to safety.

The report detailed the extraordinary efforts to save the trapped commanding officer from his crushed cabin: "A junior officer and two chief petty officers removed debris from in front of the door and crawled into the cabin. The skin of the ship and outer bulkhead were gone and the night sky could be seen through the hanging wires and ripped steel. The rescue team tied themselves together with a belt in order to create a makeshift harness as they retrieved the CO, who was hanging from the side of the ship."

Those actions stand in sharp contrast to some of the initial failures by key crew members in the moments before the ship collided with the commercial ship MV Crystal. Investigators wrote they found, "Initially, the officer of the deck intended to take no action, mistaking Crystal to be another of the two vessels with a greater closest point of approach. Eventually, the officer of the deck realized that Fitzgerald was on a collision course with Crystal, but this recognition was too late."

The Crystal also failed to take action, the Navy said, but the military still holds itself at fault for failing to avoid the collision.

"The officer of the deck, the person responsible for safe navigation of the ship, exhibited poor seamanship by failing to maneuver as required, failing to sound the danger signal and failing to attempt to contact Crystal on bridge-to-bridge radio. In addition, the officer of the deck did not call the commanding officer as appropriate and prescribed by Navy procedures to allow him to exercise more senior oversight and judgment of the situation." The report details similar failures by other crew members.

The events on the USS John S McCain, which claimed the lives of 10 sailors on August 21 near Singapore when it collided with a merchant vessel, were equally harrowing.

Key causes of the collision outlined in the report included: a failure of situational awareness in response to mistakes in the ship's operation; a failure to follow international maritime rules that apply to maneuvering of vessels in the face of a possible collision; and the fact some of the sailors were insufficiently proficient with the ship's systems.

The ship, with approximately 300 sailors aboard, was 50 nautical miles east of Singapore in the predawn hours of August 21 when the commanding officer ordered the watch team on duty to divide the duties of steering and the speed control of the ship after noticing one of the sailors on deck was having some difficulty at the controls.

According to the report, this shift created confusion among the team, and after steering control of the ship was transferred to a different control station, members of the crew failed to recognize the change in configuration.

While the McCain was now in a heavily congested maritime environment, it was soon on a course to collide with the Alnic MC, an approximately 30,000-ton and 600-foot-long oil and chemical tanker.

The report says the commanding officer and others on the ship's bridge "lost situational awareness" and did not register the course and speed of the approaching tanker the McCain collided with after crossing in front of the tanker's bow.

The impact created a 28-foot in diameter hole both above and below the waterline. All 10 of the fallen sailors aboard the McCain were in the same berthing compartment at the time of impact, the report said, and eight were likely sleeping in their beds at the time of the collision.

Based on the size of the hole, the report concluded the space "likely fully flooded in less than a minute after the collision."

In another berthing compartment impacted by the collision, one sailor resting in his bed shouted for help as he became pinned between his sleeping rack and another as water began to rush all around him, and he was only extracted after fellow sailors were able to use a "jaws of life" cutting device to separate the racks and pull him to safety.

The collision was felt throughout the ship, according to the report, with sailors on the bridge jolted from their stations while others were thrown off their feet.

The communications systems on the bridge stopped working after the collision, with the bridge reduced to using handheld radios and phones, which do not require electricity to transmit. The loss of communications was due to the quick flooding of the berthing compartment that housed much of the ship's communications control equipment.

The McCain was able to request tugboats and pilots from Singapore Harbor to assist in getting the ship to Changi Naval Base.

While the process of accounting for all crew members began immediately after the collision, the damage to the ship made confirming the location of some personnel exceedingly difficult. Varying reports of missing sailors were made in the minutes after the collision.

Medical teams aboard the McCain established a triage center in the mess area, where crews would normally eat their meals, to tend to injuries that ranged from chemical burns to broken bones and open wounds.

Five sailors who were eventually evacuated to hospitals in Singapore suffered severe injuries, including a sailor who was pinned to his sleeping rack after the collision.

"Many of the decisions that led to this incident were the result of poor judgment and decision-making of the commanding officer," the report said. "That said, no single person bears full responsibility for this incident."

Among the lapses, the report said leadership aboard the ship failed to assign sufficiently experienced officers to certain duties and also faulted other senior officers for not attending a security briefing the afternoon before the collision designed to provide awareness of the risks involved in upcoming operations.

Additionally, various members of the both ships' bridge and Combat Information Center watch teams also received administrative actions. The Navy does not make these public, but the actions could include letters of reprimand that could effectively end their careers. If continuing investigations uncover other information that requires additional punishments, further actions may still be taken, according to the Navy.

Sen. Ben Sasse, R-Nebraska, reacted to the report. "We are dangerously underinvesting in our military," he said. "Training, readiness and maintenance are hit the earliest -- and tragic errors like this are the canary-in-the-mine warning bells."