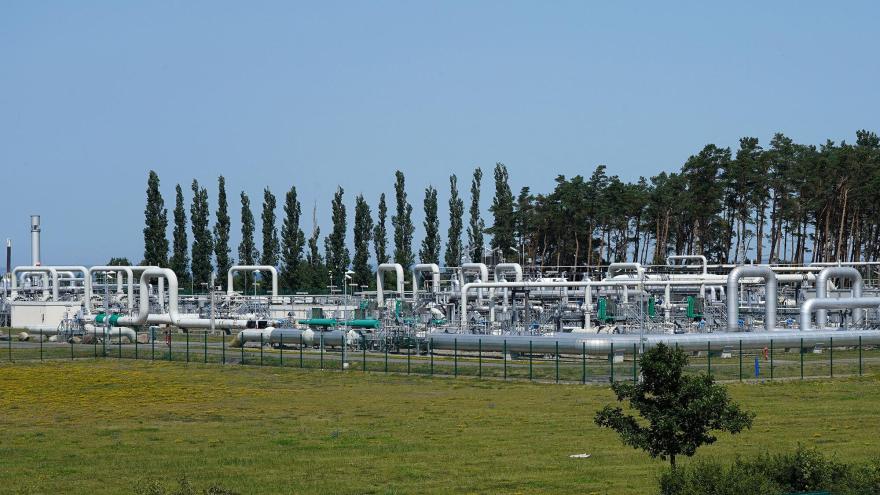 A photo taken on July 20, 2022 shows pipe systems at the industrial plant of the Nord Stream 1 Baltic Sea pipeline near Lubmin, northeastern Germany.

(CNN) -- The Biden administration is working furiously behind the scenes to keep European allies united against Russia as Moscow further cuts its energy supplies to the European Union, prompting panic on both sides of the Atlantic over potentially severe gas shortages heading into winter, US officials say.

On Monday, Russia's state-owned gas company Gazprom said it would cut flows through the Nord Stream 1 pipeline to Germany in half, to just 20% of its capacity. A US official said the move was retaliation for western sanctions, and that it put the West in "unchartered territory" when it comes to whether Europe will have enough gas to get through the winter.

In response to the turmoil, the White House dispatched presidential coordinator for global energy Amos Hochstein to Europe on Tuesday, officials said. He will be traveling to Paris and Brussels to discuss contingency planning with the US-EU energy task force created in March, one month after Russia's invasion of Ukraine.

"This was our biggest fear," said the US official. The impact on Europe could boomerang back onto the US, spiking natural gas and electricity prices, the official said. It will also be a major test of European resilience and unity against Russia, as the Kremlin shows no signs of retreating from Ukraine.

The US and Brussels have been pleading with EU members to save gas and store it for winter, and on Tuesday, energy ministers agreed in principle to cut gas use by 15% from August to March.

There will also be discussions in the coming days about increasing nuclear power production across Europe to offset gas shortages, officials said. Germany was planning to completely phase out its use of nuclear power by the end of 2022, but US officials are hoping to convince Berlin to extend the life of its three remaining nuclear power plants amid the energy crisis, an official said.

US officials, who have been in close touch in particular with German and French officials on this topic, are extremely concerned that Europe might face a serious gas shortage going into winter. That is because EU countries will struggle to fill their reserves over the next few months with Nord Stream 1 providing only a fraction of its capacity.

Germany scrapped plans for another Russia-Europe gas pipeline, Nord Stream 2, after Russia invaded Ukraine in February. The US was opposed to that pipeline, warning that it would only increase European dependency on Russian gas. But Germany argued that the pipeline was a purely commercial project, and that it could serve as an energy bridge as it phased out nuclear and coal. The US ultimately issued waivers allowing the pipeline project to move forward without crippling sanctions.

Now, officials said a 15% cut in Europe's gas consumption, along with a surge of global liquefied natural gas exports to Europe, including from the US, is unlikely to be enough to offset the shortages.

"This is an open gas war that Russia is waging against a united Europe," Ukrainian President Volodymr Zelensky said on Tuesday. The US official said it was clear the Russians are "lashing out" and trying to "destabilize Europe" because they are not achieving their goals in Ukraine.

A National Security Council spokesperson called Russia's moves just its latest attempts "to use natural gas as a political and economic weapon."

"Russia's energy coercion has put pressure on energy markets, raised prices for consumers, and threatened global energy security. These actions only underscore the importance of the work the United States and the European Commission are doing to end our reliance on Russian energy," the spokesperson said. "We will continue working with our European partners to reduce dependence on Russian energy and support their efforts to prepare for further Russian destabilization of energy markets."