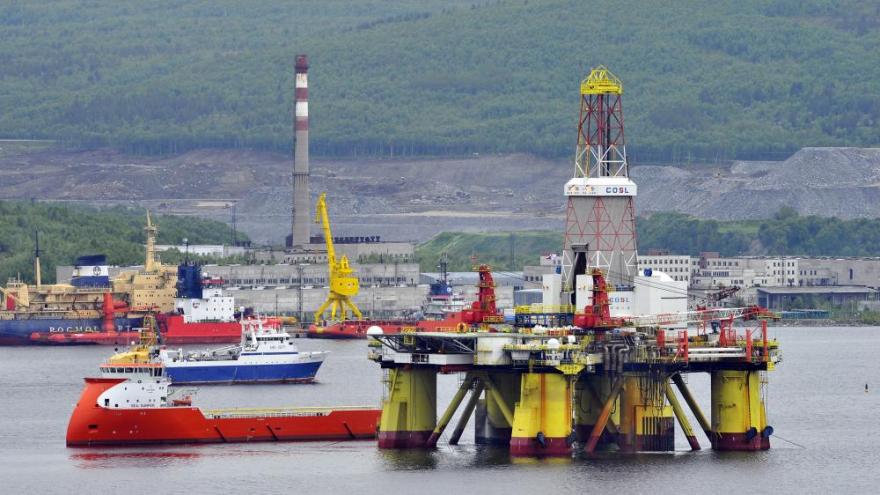 A global deal to slash oil production is at risk after Mexico objects.

(CNN) -- During a contentious call with the Saudi ambassador in Washington, a group of 13 senators from oil producing states voiced their frustration over the oil price war that is damaging US producers and threatened to upend the US-Saudi relationship.

"We are going to fundamentally, not only reevaluate, but take actions that will start to undermine the long term relationship that many of us have supported," Sen. Dan Sullivan of Alaska told CNN in describing the messages from the senators to the Saudi Ambassador to the US, Princess Reema bint Bandar Al Saud, during that call late last month.

The senators have grown increasingly angry as oil prices have plunged as a result of a price war between Russia and Saudi Arabia, which comes as the coronavirus continues to devastate the country. They are fearful of their constituents being laid off if US producers are financially squeezed, which would further hurt the US economy at this delicate moment. More than 16 million Americans have already filed for unemployment in the last three weeks.

On Saturday the same group of senators will speak with the Saudi Energy Minister, Khalid al-Falih. They don't plan to hold back their ire as they press for a solution.

"We'll see what he says," Sullivan said. "But at this point actions are going to speak a lot of louder than words."

"Texas is mad," Sen. Ted Cruz bluntly stated, according to another source who was on the call. "The anger from the senators was unlike anything I have heard from this group," this source said.

Countless workers, many of them in Republican-leaning states like Texas, could lose their jobs. Some shale oil drillers that took on too much debt won't survive at all. These senators are blaming Saudi Arabia because it is considered a strategic ally of the US.

"The Saudi kingdom is supposed to be our friend. We are a military ally. We are a diplomatic ally," Cruz said on CNBC on March 30. "You are not behaving like a friend when you are trying to destroy thousands and thousands of small businesses all across Texas and the country."

The senators say they are ready to act.

"We're not bluffing, Sullivan said. "Not even remotely."

Legislation has been introduced to remove US forces from Saudi Arabia, and there has been discussion about sanctions if Saudi Arabia does not help find a solution.

During the call between Princess Reema and the angry senators, she tried to keep it short and deliver talking points. The senators wouldn't allow it.

'With all due respect'

"I said ambassador, with all due respect, I don't want to hear any talking points from you until you hear from all, I think there's 11 or 12 on the call," Sullivan said. "At the end if you still feel the need to provide us with your talking points that is fine. But I organized this call so you could hear the anger from the voices of senators who have traditionally supported the US-Saudi relationship."

The Senators explained to the Ambassador that losing their support would result in the Kingdom losing its lifeline on Capitol Hill. After the murder of Washington Post journalist Jamal Khashoggi, support for the Saudis has waned tremendously in Washington. Without the support of these senators, anti-Saudi legislation would flourish even more, they told her.

The Saudi embassy did not reply to a request for comment.

On Saturday the same group of senators will speak with the Saudi Energy Minister. They don't plan to hold back their ire, as they press for a solution.

"We'll see what he says," Sullivan said. "But at this point actions are going to speak a lot of louder than words."

Last week, when the group of the senators who have taken up this effort met with President Donald Trump, they made a plea to him: stand on the side of US oil producers.

They told the President — who is acutely sensitive to the beating the US economy has taken due to coronavirus — that the oil industry played a big role in driving the US out of the recession of 2008-2009. That argument seemed to carry weight with the commander in chief, Sullivan explained.

At one point Trump said that the lower oil prices are good for everyday Americans and said he would enter the fray at the right time. In the last week or so, he has put in a more concerted effort to broker a solution to the crisis, with phone calls to his Russian and Saudi Arabian counterparts.

During the press briefing on Thursday night, Trump called an impending deal between the Saudis and Russians to cut production a "very acceptable agreement." US diplomats spent Friday trying to urge Saudi Arabia to cement the deal, sources said, but so far, they have come up empty-handed.

And after OPEC members and other major energy powers met on Thursday, Russia and Saudi Arabia called off their brutal price war. They are now pushing dozens of major crude producers toward a deal that would slash production and help stabilize a market that's been rocked by the coronavirus pandemic. But there is no definite solution to the problem yet, with Mexico still refusing to cut its supply.