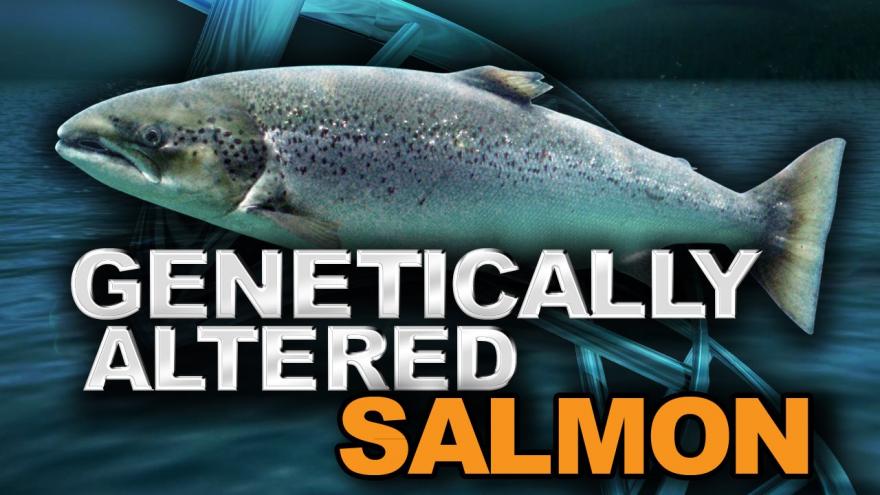 NEW YORK (AP) — U.S. regulators on Friday gave the green light to salmon genetically modified to grow about twice as fast as normal, but the company behind it may face legal challenges before the fish can be sold domestically.

The Food and Drug Administration said it lifted an alert that had prevented AquaBounty from importing its salmon eggs to its Indiana facility, where they would be grown before being sold as food. The agency noted the salmon has already undergone safety reviews, and that it lifted its alert because the fish would be subject to a new regulation that will require companies to disclose when a food is bioengineered.

The move comes despite a pending lawsuit filed by a coalition of consumer, environmental and fishing groups that challenged the FDA's approval of the fish.

"We think a remedy in our case would stop sale of the fish before they're allowed to be sold," said George Kimbrell, legal director for the Center for Food Safety, one of the groups suing the FDA.

AquaBounty was founded in 1991, and it has been working through years of safety reviews and regulatory hurdles to sell its fish in the United States. In 2015, its salmon became the first genetically modified animal approved by the FDA for human consumption. But the agency subsequently issued an alert that stopped the Maynard, Massachusetts-based company from importing its fish eggs until disclosure guidelines for genetically modified foods were resolved.

Called AquAdvantage, the fish is Atlantic salmon modified with DNA from other fish species to grow faster, which the company says will help feed growing demand for animal protein while reducing costs.

AquaBounty CEO Sylvia Wulf said the company expects to get a final certification for its Albany, Indiana, growing facility in the coming weeks. Salmon eggs could then be sent from the company's research and development facility in Canada, and would be harvested after about 18 months when they reach 10 pounds, she said.

Wulf said it's been difficult to engage companies in sales discussions because AquaBounty didn't know when it could start growing the fish in the United States. She said the salmon already has been sold in limited quantities in Canada, where it doesn't have to be labeled as genetically modified. Wulf said she doesn't expect the pending lawsuit to affect the company's U.S. plans.

The genetically modified salmon are raised in tanks and bred to be female and sterile, measures designed to address any fears that they might get into the environment and breed with wild fish.

But Kimbrell, of the Center for Food Safety, said the company's own tests have shown it's not 100 percent certain the fish would be sterile, and that concerns about it getting in the environment would grow if the company's operations were to expand.

He also noted the disclosure regulation uses the term "bioengineered," even though most people are more familiar with the term genetically modified. And he pointed out that companies can provide disclosure through codes that have to be scanned.

Implementation of that regulation starts in 2020, though people may start seeing disclosures on packages sooner.

The genetic modification for AquaBounty's fish is different from gene-editing technology, which lets scientists snip out specific genes to bring about traits without introducing foreign DNA. Companies are also working to develop a variety of gene-edited crops and animals.