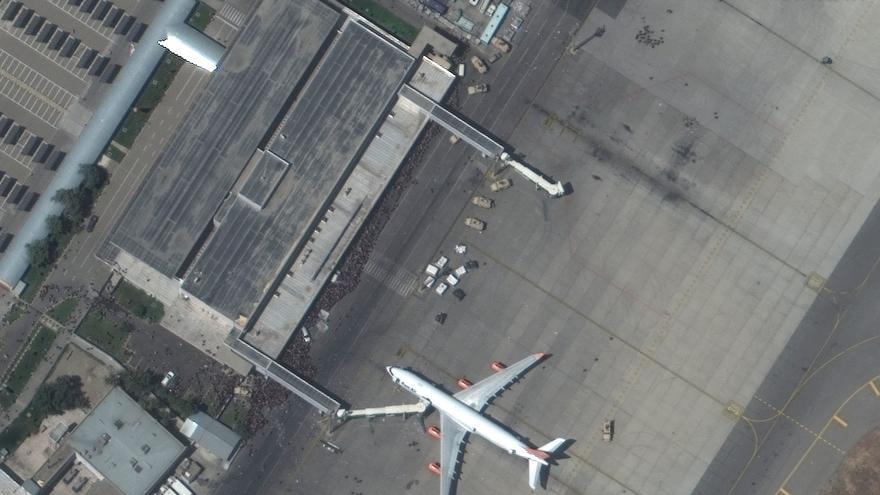 This satellite image shows crowds of people near an airplane at the international airport in Kabul, Afghanistan, on August 16.

(CNN) -- Violence erupted at the Kabul airport as US forces shot and killed two armed men who fired on them Monday, the Pentagon said, as the US resumed temporarily suspended operations at the airfield after clearing crowds off the runways.

As the chaos at the airport and the tumultuous US withdrawal continued, President Joe Biden was briefed by his national security team about the situation and then flew from Camp David to Washington to prepare to address the nation about the state of affairs in Afghanistan as the Taliban solidified their control of the country.

"In two separate incidents, US forces did respond to hostile threats, and that resulted in the death of two armed individuals," Kirby said during a briefing on Monday.

He said "there is no indication" that the two men killed by US troops were Taliban and added that while the mission at the airport is "not offensive," US forces "have the inherent right of self-defense."

A witness, however, told CNN the two men shot and killed by US forces were Taliban fighters and that a third fighter was injured. According to the witness, the Taliban fighters showed up at an airport entrance just as multiple high-profile foreign and Afghan vehicles were trying to enter the airport through the same entry.

The witness says that in the confusion, the Taliban fighters shot into the air to try to clear the gate and that the US military fired back, killing two of the men and injuring a third. CNN has been unable to independently verify the three men were indeed members of the Taliban.

The gunfire underscored the turmoil and confusion that have marked the sudden US exit from Afghanistan. All US Embassy staff are at the Kabul airport, which is now under US control as the Pentagon and US allies work to evacuate personnel. Even as flights began again, the defense official warned that the military anticipates continued sporadic clearing operations if crowds continue to gather.

"The situation in Kabul city is coming under full control," Mujahid said. He added that the Taliban have arrested most of the people who were involved in violence in the capital after their take-over of the city and reiterated the Taliban promise that the group would not go from door to door in search of former government officials.

Kirby told reporters that about 2,500 US troops are now at the airport. Over the next 24 hours, the Defense Department expects additional forces to arrive "from both the 82nd Airborne Division and battalions from a marine expeditionary unit," he said. Once those additional forces arrive, there will be about 3,000 US troops at the airport by Tuesday, he said. "We will continue to expand our security presence as needed," Kirby said.

Once additional forces approved by Defense Secretary Lloyd Austin arrive at the airport in the next two or three days, total US troops will number about 6,000. They will be charged with securing the perimeter of the airport, a US defense official told CNN.

The US military had temporarily suspended air operations at the airport while US troops cleared Afghans who had flooded onto the airfield in a desperate rush to escape the Taliban, a US defense official told CNN.

Some Afghans had reportedly surged toward departing planes, making frantic attempts to scramble onto and then cling to the aircraft as they took off.

Video has emerged of several people clinging to the fuselage of a US military C-17 aircraft as it taxied Monday. There are scores more people watching or following the plane, some of them underneath its engines. Other video shows a US military Apache helicopter swooping low over the tarmac in what appears to be an effort to disperse the crowds.

Separate video circulated on social media shows a US C-17 soon after takeoff. At least two objects, or people, can be seen falling to the ground as the plane gains altitude.

CNN cannot independently verify that anyone was still clinging to the aircraft when it took off -- and it's not known whether it was the same plane or whether the crew was aware that people were clinging to it at all.

Multiple US defense officials told CNN they could not confirm the incident.

Amid the reports of airport unrest and a sudden US decision Sunday to rush an additional 1,000 troops to Kabul, the leading US military commander in the Middle East met with Taliban officials Sunday. Gen. Frank McKenzie, the commander of US Central Command, met with Taliban leaders in Doha, Qatar, to underscore that the sole US mission was to get people out safely, a defense official said.

Also on Sunday, Secretary of State Antony Blinken spoke separately with the foreign ministers of Australia, France, Germany and Norway about the security situation in Afghanistan, along with efforts to bring their citizens to safety and assist vulnerable Afghans.

On Monday, Blinken spoke to the Chinese and Russian foreign ministers as well, calls the State Department described only briefly in readouts. Moscow's Foreign Ministry issued its own readout, saying Blinken and Foreign Minister Sergey Lavrov "discussed the situation in Afghanistan after the head of state of the country fled, the collapse of the current government and the de facto taking place regime change."

According to the Russians, Blinken told Lavrov about the US evacuation and the "urgent humanitarian tasks." The two agreed to continue consultations about Afghanistan with representatives of China, Pakistan, the UN and "other interested countries."

Biden administration officials continue to insist the US can stabilize the situation, issuing talking points to allies on Capitol Hill and making media appearances to defend Biden's decision to pull out.

"The United States has the forces that are necessary to bring stability and security to that airport," deputy national security adviser Jon Finer told CNN's Brianna Keilar on "New Day."

"I think they have gone a great distance towards doing that since some of those images have aired," Finer said of scenes of mayhem at the airport.

"There are going to be more forces flowing in throughout the course of today and tomorrow, and we believe we have what's necessary to be able to enable these flights to continue as soon as possible," Finer said.

Finer said the US also issued a warning, making clear to the Taliban "in no uncertain terms" not to interfere with Afghans who are attempting to get to the Kabul airport for potential evacuation. But Finer also added that those Afghans should wait until they are told it is time for their evacuation before going to the airport.

"We are asking people, in an orderly way, when their flight is called," Finer said. "And again, this is not going to be just a free-for-all. It can't be, for security reasons. ... When people's flights are timed, we are asking them to show up at the airport to be present to get on those flights. Not just whoever happens to come to the airport."

State Department spokesperson Ned Price said on Monday that "some 1,600 individuals" had been airlifted out of Afghanistan on US military aircraft in recent days. Earlier, State Department officials had estimated there were a total 4,000 embassy employees -- US citizens and Afghans -- waiting for evacuation. Price said the 1,600 was in addition to 2,000 Afghans applying for Special Immigrant Visas who had been flown out earlier.

As the Biden administration prioritizes the evacuation of American personnel from the country, it curtailed the number of government-sponsored evacuation flights to the United States for Afghans who worked alongside the US for the time being, three sources familiar with the situation told CNN Sunday.

Late Sunday, the Defense Department and State Department announced US forces said in a joint statement that "tomorrow and over the coming days, we will be transferring out of the country thousands of American citizens who have been resident in Afghanistan, as well as locally employed staff of the U.S. mission in Kabul and their families and other particularly vulnerable Afghan nationals."

"And we will accelerate the evacuation of thousands of Afghans eligible for U.S. Special Immigrant Visas, nearly 2,000 of whom have already arrived in the United States over the past two weeks," the joint statement said. "For all categories, Afghans who have cleared security screening will continue to be transferred directly to the United States. And we will find additional locations for those yet to be screened."

This story has been updated with further developments and details Monday.