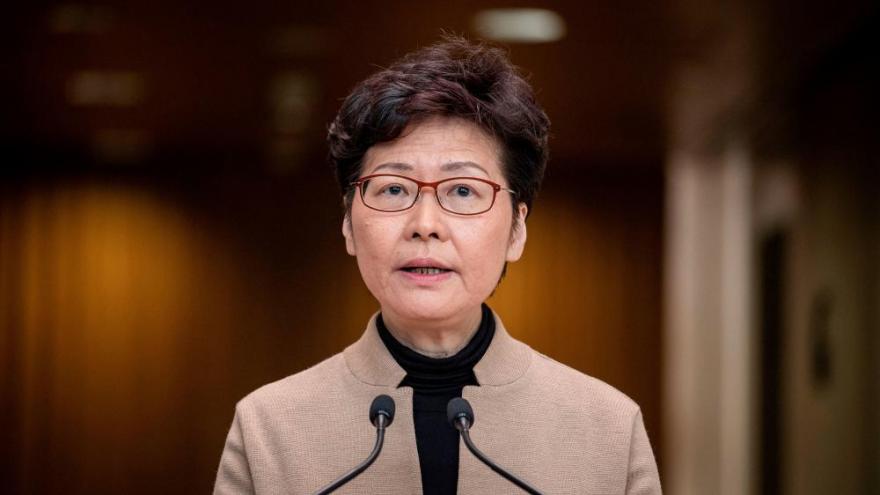 (CNN) -- The US sanctioned Hong Kong Chief Executive Carrie Lam Friday for her role in crackdowns on political freedom in the region.

Sanctioning Lam is a significant escalation, experts say. Friday's action against Lam and ten others is likely to further inflame tensions between Washington and Beijing. It is the latest move in response to China's imposition of a sweeping national security law on Hong Kong that criminalizes secession, subversion, terrorism and foreign interference.

"The 11 individuals designated today have implemented policies directly aimed at curbing freedom of expression and assembly, and democratic processes, and are subsequently responsible for the degradation of Hong Kong's autonomy," the US Treasury Department said in a statement Friday.

Lam has defended the controversial law as a "crucial step to ending chaos and violence that has occurred over the past few months."

"It's a law that has been introduced to keep Hong Kong safe," she said in July. "The legislation is lawful, constitutional and reasonable."

The Treasury Department cited her as being "directly responsible for implementing Beijing's policies of suppression of freedom and democratic processes."

"In 2019, Lam pushed for an update to Hong Kong's extradition arrangements to allow for extradition to the mainland, setting off a series of massive opposition demonstrations in Hong Kong," the Treasury Department said. "Lam is designated for being involved in developing, adopting, or implementing the Law of the People's Republic of China on Safeguarding National Security in the Hong Kong Special Administrative Region (National Security Law)."

Authorities in Hong Kong said Saturday they would consider counter measures in response.

Edward Yau, the city's secretary for commerce and economic development, called the sanctions "unreasonable and barbarous" moves that will hurt US interests in Hong Kong.

"I do not find any valid reason for this blatant interference of Hong Kong affairs by a foreign country. I do not think this is necessary or in a civilized manner to do so," Yau said during an interview with public broadcaster RTHK. "It will definitely hurt the Hong Kong-US relations."

Lam said she and other Hong Kong officials targeted by the sanctions would not be intimated, according to a spokesman quoted in a Hong Kong government statement issued on Saturday.

The spokesman accused the US of "using Hong Kong as a pawn in its ploy to create troubles in China-US relationship, out of self-serving interests of some US politicians."

As a result of Friday's sanctions, "all property and interests in property of the individuals ... and of any entities that are owned, directly or indirectly, 50 percent or more by them, individually, or with other blocked persons, that are in the United States or in the possession or control of US persons, are blocked and must be reported to OFAC."

"Today's actions send a clear message that the Hong Kong authorities' actions are unacceptable and in contravention of the (People's Republic of China)'s commitments under 'one country, two systems' and the Sino-British Joint Declaration, a UN-registered treaty," Secretary of State Mike Pompeo said in a statement Friday.

Under the "One Country, Two Systems" policy, Hong Kong retained limited democracy and civil liberties despite being under Beijing's control. US officials, including Pompeo, argue that the national security law shattered that premise, and Hong Kong no longer enjoys autonomy from mainland China.

"The Chinese Communist Party has made clear that Hong Kong will never again enjoy the high degree of autonomy that Beijing itself promised to the Hong Kong people and the United Kingdom for 50 years," the top US diplomat reiterated Friday.

Jude Blanchette, the Freeman Chair in China Studies at the Center for Strategic and International Studies, told CNN that the inclusion of Lam in Friday's tranche of sanctions is "a significant move."

"This will have a pretty fundamental ripple effect through Hong Kong, including Hong Kong's position as a financial hub in Asia Pacific," he said. Blanchette noted that Hong Kong was "already moving to become a precarious market" after the announcement of the national security law, and now having Lam on the US sanctions list "will send a chill through the business community there."

Julia Friedlander, a senior fellow and Deputy Director of the Global Business and Economics Program at the Atlantic Council, called the designation of Lam "a very significant escalation." However, she noted that Friday's actions, taken with the recent other measures against China by the Trump administration, seem like "escalation with no clear end trajectory."

Following the passage of the national security law, Trump announced the US would revoke Hong Kong's special status. In mid-July, President Donald Trump issued an "executive order on Hong Kong normalization." Friday's sanctions were issued under that order.

On Thursday, Trump issued an executive order that would ban the social media apps TikTok and WeChat from operating in the US in 45 days if they are not sold by their Chinese-owned parent companies.

"Beijing is on the receiving end of a pretty steady stream of measures by the United States that it's having to focus on," Blanchette told CNN. "It's trying to both respond to these but also Beijing has an eye towards November. And it's calibrating its responses to US actions in a way that both signal resolve but don't alienate or potentially harm a redirect or a reset if there's another administration coming in."