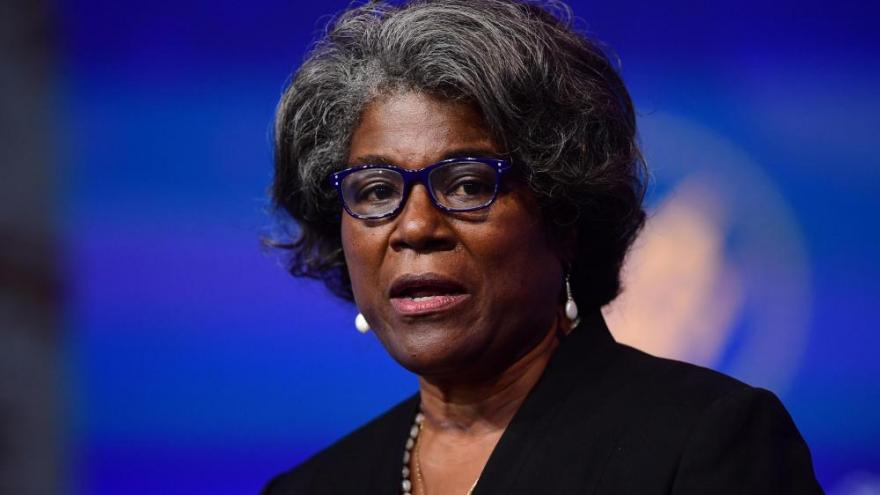 U.S. Ambassador to the United Nations nominee Linda Thomas-Greenfield speaks after being introduced by President-elect Joe Biden as he introduces key foreign policy and national security nominees and appointments at the Queen Theatre on November 24, 2020 in Wilmington, Delaware.

(CNN) -- The United States says evidence at Ukraine's border shows that Russia is "moving towards an imminent invasion" and is not withdrawing troops, despite Moscow's claims.

"The evidence on the ground is that Russia is moving towards an imminent invasion," US Ambassador to the UN Linda Thomas-Greenfield said Thursday, as she announced that US Secretary of State Antony Blinken will deliver remarks at the United Nations Security Council meeting that morning.

Thomas-Greenfield said that Blinken, in a last-minute change to his schedule, will address the UN because "this is a crucial moment."

"Our goal is to convey the gravity of the situation," she said.

US Secretary of Defense Lloyd Austin on Thursday also said the US government is not seeing any kind of withdrawal of Russian troops from Ukraine's border, instead seeing Russia adding to its capabilities and troops "even in the last couple of days."

During a press conference at NATO headquarters in Brussels, Austin said the US is seeing Russia move some troops closer to the border, "fly in more combat and support aircraft," "sharpen their readiness in the Black Sea" and even "stocking up their blood supplies."

"I was a soldier myself not that long ago, and I know firsthand that you don't do these sort of things for no reason, and you certainly don't do them if you're getting ready to pack up and go home, so we and our allies will stay vigilant," he said Thursday.

NATO Secretary General Jens Stoltenberg said earlier Thursday that NATO allies are concerned that Russia is attempting to "stage a pretext" for an armed attack against Ukraine.

He added that NATO has observed "false flag operations" in Ukraine by Russian intelligence officers to "provide an excuse for invading Ukraine."

"We don't know what will happen, but what we do know is that Russia has amassed the biggest force we have seen for decades in and around Ukraine," Stoltenberg said.