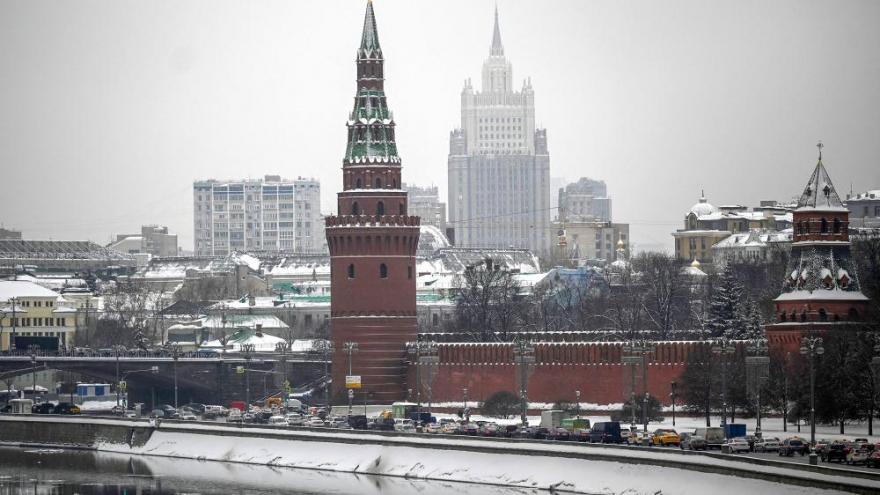 A picture taken on February 1 shows the Vodovzvodnaya Tower of the Kremlin and the Ministry of Foreign Affairs of Russia's building in Moscow. The US has written to the top United Nations human rights official that it has "credible information" that Russian forces are identifying Ukrainians "to be killed or sent to camps" if it further invades Ukraine and occupies it.

(CNN) -- The US has written to the top United Nations human rights official that it has "credible information" that Russian forces are identifying Ukrainians "to be killed or sent to camps" if it further invades Ukraine and occupies it.

"Disturbing information recently obtained by the United States that indicates that human rights violations and abuses in the aftermath of a further invasion are being planned," Ambassador Bathsheba Nell Crocker, the US Representative to the Office of the United Nations and Other International Organizations in Geneva, alleges in a letter to Michelle Bachelet, the UN High Commissioner for Human Rights.

"These acts, which in past Russian operations have included targeted killings, kidnappings/forced disappearances, unjust detentions, and the use of torture, would likely target those who oppose Russian actions, including Russian and Belarusian dissidents in exile in Ukraine, journalists and anti-corruption activists, and vulnerable populations such as religious and ethnic minorities and LGBTQI+ persons," reads the letter, which was first reported by The Washington Post and obtained by CNN.

"Specifically, we have credible information that indicates Russian forces are creating lists of identified Ukrainians to be killed or sent to camps following a military occupation. We also have credible information that Russian forces will likely use lethal measures to disperse peaceful protests or otherwise counter peaceful exercises of perceived resistance from civilian populations," the letter says.

The letter did not say how the US obtained the information. The Office of the United Nations High Commissioner for Human Rights confirmed that it received the message.

Crocker added that the aim for sharing this information with the Office of the United Nations High Commissioner for Human Rights was to give "an early warning that a further Russian invasion of Ukraine may create a human rights catastrophe." She said US Secretary of State Antony Blinken raised these concerns to the Security Council on February 17. "In particular, he stated that the United States has information that indicates Russia will target specific groups of Ukrainians," Crocker added.

The Kremlin on Monday denied the claim regarding a kill list and called it "absolute fiction."

"This is an absolute hoax, this is a lie," Kremlin spokesperson Dmitry Peskov told CNN. Pressed on if he is aware of the existence of such a list, Peskov said, "I know that this is absolute fiction, there is no such list, it is fake news."

CNN reported on Friday that multiple US and western government officials confirmed to CNN that the US has intelligence that Russia has drawn up lists of current political figures that it would target for removal in the event it invades Ukraine and topples the current government in Kyiv.

Sources familiar with the intelligence said the target lists are part of Russian planning to replace the current administration in Kyiv with a more Russia-friendly government, bolstering a previous disclosure by the British government identifying pro-Moscow figures it said Russia planned to install.

The most likely outcome for those politicians and public figures whom Moscow has targeted to be ousted in the event Kyiv falls, these sources said to CNN, is jail or assassination.

CNN has not seen the underlying intelligence intercepts or the documents that name the targets or the purported collaborators and their supposed positions in a pro-Russia administration.

Blinken said on CBS's "Face the Nation" over the weekend that the US would continue supporting Ukrainians if there is an invasion and a Ukrainian insurgency is left to fight.

"(President Joe Biden) said that we will, in the event of an invasion, double down on our support for Ukraine, and that means in terms of security assistance, economic assistance, diplomatic assistance, political assistance, humanitarian assistance, you name it," Blinken said.