US says Russia has added 7,000 troops along Ukraine border, despite claims of pullback 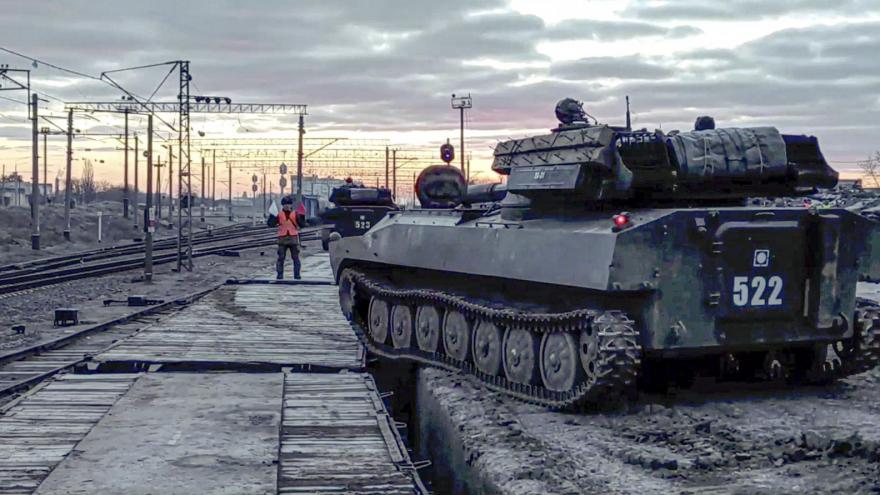 In this photo taken from video provided by the Russian Defense Ministry Press Service on Tuesday, Feb. 15, Russian armored vehicles are loaded onto railway platforms after the end of military drills in South Russia.

(CNN) -- Russian forces massed along Ukraine's borders have increased by approximately 7,000 troops in recent days, the United States alleged Wednesday evening, despite claims from Moscow it was pulling back.

A senior US administration official said the increase renders Russia's assertion of withdrawal "false," and warned President Vladimir Putin's public openness to diplomacy was a guise.

"Every indication we have now is they mean only to publicly offer to talk, and make claims about de-escalation, while privately mobilizing for war," the official said.

The new estimates would place the number of Russian forces north of the 150,000 figure President Joe Biden cited in a televised address earlier this week. Western leaders had already greeted Russia's claims of withdrawal with skepticism. On Tuesday, Biden said during a speech in the East Room that a withdrawal of Russian troops would be "good," but that he had yet to see any evidence that such a pullback was underway.

"Our analysts indicate that they remain very much in a threatening position," Biden said. "And the fact remains right now Russia has more than 150,000 troops encircling Ukraine and Belarus and along Ukraine's border."

The senior official again warned Russia could use a false pretext for an attack, including making claims about NATO activity or an incursion into Russian territory, or alleging atrocities were occurring in the eastern Donbas region, which has been under the control of Russian-backed separatists since 2014.

"We should expect more false reports from Russian state media over the coming days," the official said. "We don't know what form the false pretext will take. But we hope the world is ready."

The announcements, delivered on an early evening briefing call, painted a stark picture as the US and Europe wait on tenterhooks for Putin to signal his intentions. American officials have said the window is open for a potential invasion but that the enigmatic Russian leader will still need to make the final decision.

A day earlier, Biden had seized on signals from Moscow that it is willing to resume negotiations, saying there was "plenty of room for diplomacy." But the official speaking a day later largely discounted those prospects while still saying talks would continue.

"We will continue to pursue diplomacy over the coming days while being prepared to respond swiftly and decisively," the official said. "Russia keeps saying it wants to pursue a diplomatic solution; their actions indicate otherwise. We hope they will change course before starting a war that will bring catastrophic death and destruction."

On Tuesday, Putin claimed Russia was sending some troops back to base after completing drills in Crimea, the Ukrainian territory annexed by Russia in 2014.

But US and European leaders uniformly cast doubt on the claim.

NATO Secretary General Jens Stoltenberg said the alliance had not yet seen "any sign of de-escalation on the ground," but added that "signs from Moscow that diplomacy should continue" were grounds for cautious optimism.

The Ukrainian foreign minister, Dmytro Kuleba, told a news conference in Kyiv that he was abiding by a rule when it comes to Russian claims: "Do not hear and then believe. But do see and then believe."

And US Secretary of State Antony Blinken said in a morning interview Wednesday there is "a difference between what Russia says and what it does."

This story has been updated with more reporting.