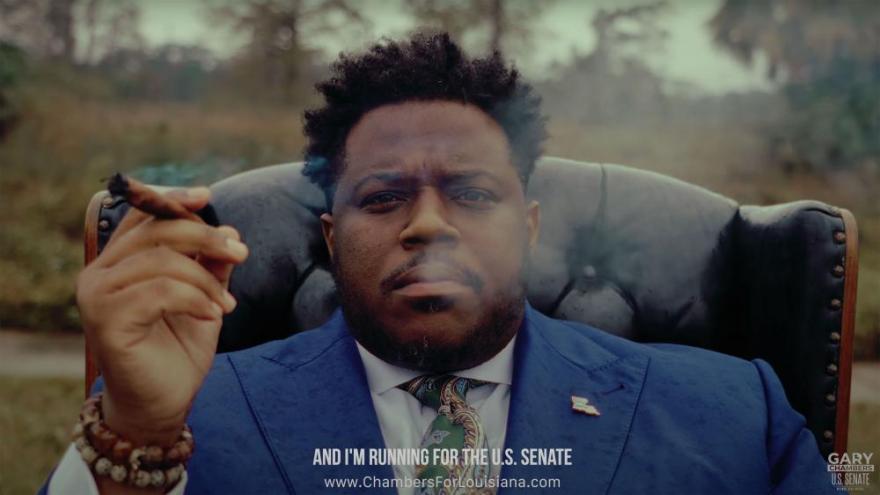 (CNN) -- A US Senate candidate in Louisiana released a campaign ad Tuesday in which he smokes marijuana in an attempt to spark what he calls "a new conversation" around the drug.

Gary Chambers Jr., a Democrat and social justice activist, is shown in the ad sitting in a chair and taking puffs from a rolled marijuana blunt. While smoking, he cites arrest statistics for Black Americans related to marijuana possession.

"I hope this ad works to not only destigmatize the use of marijuana, but also forces a new conversation that creates the pathway to legalize this beneficial drug, and forgive those who were arrested due to outdated ideology," he wrote in a tweet, sharing the ad.

Chambers is looking to unseat Republican Sen. John Kennedy in November's all-party primary. If no candidate gets a majority of the vote, there will be a December runoff for the seat.

In a statement to CNN on Tuesday, Chambers said it is "long past due that politicians stop pretending to be better or different than the people they represent," adding that it's time to overhaul the criminal justice system's treatment of marijuana possession.

"Some parts of the country are fighting opioid addictions and creating millionaires and better schools from the marijuana industry. Others are creating felonies and destroyed families. I can't stand for that," Chambers said.

The ad, according to his campaign, was filmed over the weekend in New Orleans, where the City Council took steps in August that sought to remove penalties for marijuana possession.

In June 2021, Louisiana Gov. John Bel Edwards, a Democrat, signed into law a bill that reduces penalties for possession of small amounts of marijuana. Earlier this month, a new law went into effect expanding medical marijuana, a move that had been passed by the state legislature in 2021.

According to a report released by the American Civil Liberties Union in 2020, Black Americans are nearly four times more likely than White Americans to be arrested for marijuana possession despite similar usage rates.