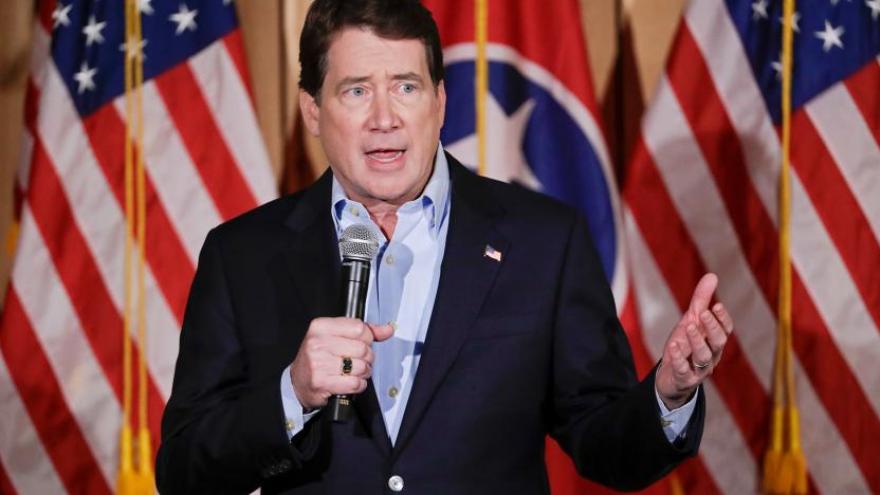 Former US Ambassador to Japan Bill Hagerty campaigns for Senate in Gallatin, Tennessee.

(CNN) -- President Donald Trump's endorsed candidate in the US Senate race in Tennessee has suddenly found himself in an increasingly competitive primary fight that has divided top Republicans and prompted anger over one GOP senator's tactics.

Bill Hagerty was expected to coast to his party's nomination after the President endorsed him a year ago. But with less than two weeks to go before the Republican primary election, Trump's former US ambassador to Japan is facing a fierce challenge marked by a late infusion of ad spending, high-profile endorsements and rallies crisscrossing the state.

Dr. Manny Sethi and Hagerty traded attacks in separate phone interviews on Thursday, directly aiming their messages at the Republicans who will decide the August 6 primary.

Hagerty depicted Sethi, an orthopedic trauma surgeon at Vanderbilt University Medical Center, as a "phony conservative" who supported Trump only when it was "convenient." Sethi fired back that Hagerty, who founded a private equity firm, is a "Washington insider" and a "Mitt Romney Republican."

The primary will test the power of Trump's endorsement in the deep red state, as his political standing has deteriorated over his handling of the coronavirus crisis. It resembles the political battles of the past, with libertarian and tea party-aligned conservatives taking on party leaders and the GOP establishment in divisive primaries that at times threatened their party's hold on critical Senate seats.

Sethi's campaign has been bolstered by the support of Kentucky Sen. Rand Paul, who appears in an ad for the Protect Freedom PAC, which has dropped more than $800,000 in the race -- more than any other outside group, according to Kantar's Campaign Media Analysis Group.

"The race was a bit of a sleeper," said Paul, who went to medical school with Sethi's medical partner and believes the candidate will "stand up when leadership wants to spend too much money."

"Really in the last couple of weeks, things have really sprung his direction," Paul added.

While Sethi has the backing of Paul, Texas' Sen. Ted Cruz and former Sen. Jim DeMint of South Carolina -- a trio who frequently battled party leaders in Senate races during the Obama years -- Hagerty has the support of Trump and Sens. Marsha Blackburn of Tennessee and Tom Cotton of Arkansas.

GOP sources said Paul's tactics have annoyed Tennessee Republicans, particularly Blackburn. In an ad running in the state, Paul, staring into the camera, says: "Tennessee is too conservative a state to keep sending Democrats in Republican clothing to represent Tennessee."

The ad angered Blackburn, multiple sources said. When asked if she thought Paul's and Cruz's efforts in the state were helpful, Blackburn replied, "Probably not."

Tennessee's Republican Sen. Lamar Alexander, whose retirement has sparked the primary fight, told CNN that Paul's ad "basically says Tennesseans need to stop electing Democrats dressed as Republicans. So, I don't wear a dress ... and my voting record in support of Trump is 90% and his is 69%."

Party leaders are watching the primary developments closely, as they cannot afford to jeopardize a Senate seat in a state Trump carried by 26 points in 2016.

"I'll acknowledge the polls have gotten tighter, but we're going win Tennessee," said Indiana's Sen. Todd Young, the chairman of the National Republican Senatorial Committee, which is officially neutral in the primary.

The winner of the Republican primary will be favored to win the Senate seat in this deeply conservative state. In 2018, Blackburn beat Phil Bredesen, a popular former Democratic governor, by more than 10 points. There are 15 Republicans on the ballot for the Senate nomination in 2020, including Hagerty, Sethi and two other doctors, George Flinn and Byron Bush.

The leading Democrat in the race is James Mackler, an attorney and former Army helicopter pilot who has the backing of the Senate Democratic campaign arm. In a recent ad, Mackler asks voters to send him to Washington "to restore respect, honesty and integrity to Washington."

Nevada's Sen. Catherine Cortez Masto, who chairs the Democratic Senatorial Campaign Committee, said she would not speculate on whether the Democrats would have a better shot at winning the general election if Hagerty loses. "I just know that we have a good candidate and we'll go from there," she said.

Since June, the GOP campaigns and other conservative groups have spent more than $9 million on TV, digital and radio ads, about 10 times what they spent in the previous seven months of the campaign, according to the Campaign Media Analysis Group. In the past week, radio host Mark Levin and Blackburn have gotten off the sidelines, respectively endorsing Sethi and Hagerty. And on Friday, two Republicans with presidential ambitions -- Cruz and Cotton -- respectively campaigned with Sethi and Hagerty in several rallies across the state.

"We need strong conservatives and we need fighters," Cruz told CNN. Asked if Trump made a mistake in backing Hagerty, Cruz said: "I think Dr. Manny is by far the better choice."

At a rally in Clarksville, Tennessee, on Friday, Cotton mentioned Hagerty's support during a firestorm of controversy following an op-ed the senator had written in the New York Times, arguing that a president has the authority to use the military to quell civil unrest in America.

"Bill Hagerty stood with me," Cotton said. The senator also argued that Hagerty will stand up to China, too.

Trading barbs as they court the conservative base

In the interview with CNN, Hagerty sought to distance himself from associations with establishment Republicans and attacked Sethi for not doing more to help Trump get elected. While the former ambassador strongly supported Romney during the 2008 and 2012 presidential campaigns, Hagerty indicated that he has since had a change of heart.

"You've got senators like Mitt Romney, who, frankly, have lost their way," Hagerty told CNN, pointing to Romney's decision to march with Black Lives Matter protesters following the police killing of George Floyd. Hagerty called BLM "a Marxist organization" that is "against the nuclear family" and "anti-Semitic."

"If you disagree with them, they don't hesitate to use violence," Hagerty said. "That's not the kind of group that I think our leaders should be standing with."

When asked what he thought of Alexander, the former governor and long-serving senator, Hagerty said, "Senator Alexander is somebody that I don't agree with." He pointed out that Alexander opposed Trump's decision to withdraw from the World Health Organization for allegedly being too influenced by China. Hagerty added that he agrees with Trump on the need to reopen schools, alleging that Alexander has "taken a different position." Alexander, chairman of the Senate committee that oversees education policy, has been reticent to offer dictates from Washington to fully open up schools, as Trump has done.

"Tennesseans can trust me to stand with Senator Blackburn and President Trump," said Hagerty. "That's been my track record."

Alexander told CNN he doesn't know if there's a candidate "who President Trump has more respect for than Bill Hagerty" and pointed out that Blackburn's endorsement will also help Hagerty in the primary.

"My experience is Tennesseans didn't elect me to tell them how to vote," Alexander said.

Pushing back on attacks for being insufficiently supportive of Trump, Sethi pointed out that he had given $10,000 to a Tennessee Republican Party victory account in 2016 and noted that Hagerty had first supported former Florida Gov. Jeb Bush in the presidential race.

"We are on the verge of a historical upset in Tennessee politics of finally defeating the Republican establishment in Tennessee," Sethi said. "I think it's the first time that a true conservative can win here in a US Senate race."

There appears to be little disagreement between the two candidates on how to address the coronavirus crisis. Hagerty called Trump's response to the pandemic "excellent," while Sethi said Trump has "done the best that you could really do in this situation" and blamed the "left-wing media" and others who "want him to fail."

In their interviews, the two candidates spent much of their time attacking each other or defending themselves from the slights made by the other.

Hagerty said Sethi donated to ActBlue, the online portal for Democratic candidates. His $50 donation was made a dozen years ago to support a family friend, Sethi said.

Hagerty charged that Sethi had applied for a White House fellowship, a nonpartisan program, under President Barack Obama. Sethi countered that Hagerty had served on the President's Commission on White House Fellowships under both Republican and Democratic administrations.

Hagerty argued that Sethi had once defended "Obamacare" on tape. Sethi retorted that he had told high school students years ago not to use the word in public because of its political connotations. Sethi has consistently opposed the Affordable Care Act and has recently aired an ad stating, "I hate Obamacare."

And Hagerty said Sethi had taken a grant to support gun control in public schools. Sethi said the Robert Wood Johnson Foundation grant was given to reduce youth violence through conflict resolution strategies, noting that in a 2012 interview he said, "Guns don't hurt people, instead people hurt people."

Sethi took Hagerty's attacks as a positive sign for his campaign.

"I think we're winning," Sethi told CNN. "Based on the fact that they're throwing everything but the kitchen sink at us, I think they're in deep trouble, and they know it."

Hagerty also projected confidence before Election Day. He said Democrats are "pushing us off the cliff into socialism" by proposing policies like "Medicare for All," the Green New Deal and "doing away with law enforcement altogether."

"I'm so dismayed by weak-kneed Republicans that will not stand up to this, that won't be the strong voice that we need," Hagerty said.