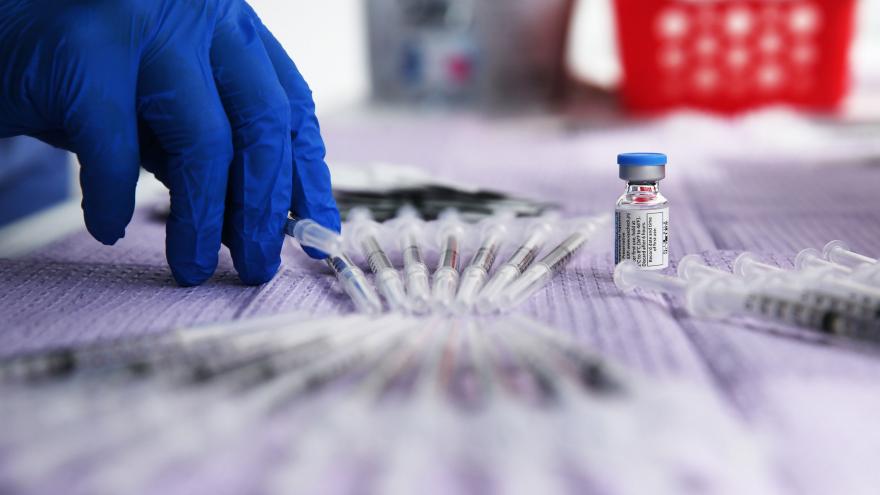 (CNN) -- A new daily record for administering Covid-19 vaccines was set Friday, but many experts reiterate that the pandemic is far from over.

The total number of doses administered jumped by about 3.38 million, according to a tweet from White House Covid-19 Data Director Dr. Cyrus Shahpar.

This is the fourth time the number of doses administered has jumped more than 3 million on consecutive days. The previous one-day record was just over 3.2 million doses, on March 13.

While the record is great news, it doesn't mean the pandemic is over, experts say. Evidence that Americans are gearing up for a return to normal life is becoming more apparent by the week.

States are relaxing capacity restrictions for public areas and private gatherings. More school districts are reopening for in-person learning. Travel is increasing, with TSA data showing more than 1 million daily passengers in US airports for two consecutive weeks, the longest such stretch since the Covid-19 pandemic lockdowns in early 2020.

Dr. Rochelle Walensky, director of the US Centers for Disease Control and Prevention, said on NBC's "Today" show Thursday that the US is "still seeing about 1,000 deaths a day," which she noted was way too many.

Walensky pointed to early signs that vaccinations are working, citing the decreased mortality rates for those over the ages of 65. Yet more infectious variants of Covid-19 are circulating, she warned.

With some states seeing rises of at least 10% in weekly average cases, according to Johns Hopkins University data, variants such as B.1.1.7 may lead to a greater risk of exposure and a potential stagnation in the fight against Covid-19.

"It tells us when we have a more contagious variant that all bets are off because it means that the activities that we thought were pretty low risk are now going to be higher risk," CNN medical analyst Dr. Leana Wen told CNN's Anderson Cooper on Thursday.

The variants are also complicating treatments, as the usage of certain monoclonal antibody therapy to treat Covid-19 have been halted due to lowered effectiveness.

The focus now is to get enough Americans vaccinated to stave off surges in infections and hospitalizations.

While there is optimism about inoculations nationwide, with the Biden administration setting a goal for 200 million doses to be distributed in the coming weeks, there is an additional concern that because the Pfizer and Moderna vaccines are given in two delayed doses. It means that in the best-case scenarios more time is needed before a return to normalcy can be achieved.

"In order for us to get to herd immunity even at this rate, it's still probably going to take about five months, assuming we can convince fully 70% of the population to take the shot," CNN medical analyst Dr. Jonathan Reiner told CNN's Erin Burnett on Thursday.

Even for those fully vaccinated, Wen said that further precautions need to be followed when interacting with other people.

"We know that right now when there is such a high level of coronavirus that's circulating in our communities, that even people who are fully vaccinated where they are in public with others who are not vaccinated, that the courteous and the right thing for them to do from an infection control standpoint is to wear a mask," Wen said.

While states and vaccine distributors push to inoculate as many adults as possible, the latest projection from the University of Washington is a reminder of what's to come for the nation.

At least 600,000 people will have died due to Covid-19 by July 1, according to the university's Institute of Health Metrics and Evaluation, meaning an estimated 59,000 people will die in the next three months. The IHME says 10,000 lives could be saved if mask use went up from the current 75% rate to 95% of the population.

"The majority of states in the northern half of the country now have increasing transmission, with the most pronounced increases in Michigan. The increases are likely related to the combination of the spread of the B.1.1.7 variant and recent increases in mobility," it said.

With increases in vaccine supplies, states are opening eligibility to more adults to receive vaccinations.

California, Connecticut, Florida, Minnesota, New Hampshire and North Carolina recently announced that adults of nearly all ages will be given the green light for vaccinations by mid-April.

Six states have already expanded coronavirus vaccine eligibility to anyone 16 and older, according to a recent CNN tally, and at least 26 more plan to open up to people 16 and older by the end of April.

Vaccines for children are being tested

Meanwhile, pharmaceutical companies are beginning to test the efficacy of vaccinating children, which would be another layer of defense against a surge of infections as school districts hope for full in-person learning.

Researchers at Duke University have begun testing the Pfizer/BioNTech coronavirus vaccine in children under the age of 12, the company told CNN on Thursday. At least two children have already received the first shot.

Moderna announced last week its next phase in pediatric vaccine trials, enrolling children in the US and Canada ages 6 months to 11 years old.

Johnson & Johnson previously announced it intends to begin trials for those ages 12 to 18 and then to add younger people to the trials.

The Pfizer/BioNTech vaccine could be ready for children ages 12 to 15 by the start of the upcoming school year, said Dr. William Gruber, Pfizer's senior vice president of vaccine clinical research and development, in an interview with NBC News on Thursday.

The entire population could benefit from school-age kids getting vaccinated, Gruber noted.

"I think that adding the school-age population, based on recommendations from the FDA and the CDC, could go a long way in helping us reach herd protection," he said.

Child care centers have become the source of some recent outbreaks. In Douglas County, Nebraska, more than 100 cases of the B.1.1.7 variant were linked to an outbreak at Rosewood Academy Childcare and Preschool, according to the Douglas County Health Department.

The school confirmed the variant at the school's Northwest location, according to a statement from the school. The school is working with the health department and having staff and families quarantine before they can return.

Vaccinations for those who are pregnant may also provide benefit, as Dr. Wen told CNN on Thursday.

"There is accumulating evidence of the safety and efficacy of the vaccines for pregnant women," she said. "Initially in the clinical trials, pregnant and breastfeeding people were not included. But since then, we've had thousands of pregnant individuals choose to take the vaccine.

"There have been no adverse safety signals or safety concerns in the thousands of women who have taken the vaccine thus far. And now there's growing evidence that they also mount a strong immune response that protects them. In fact, the antibodies that are produced seem to cross the placental barrier and also are secreted in breast milk and may protect the newborn," Wen said.

"If I were pregnant right now I would talk about it with my physician, but I probably would choose to take the vaccine."