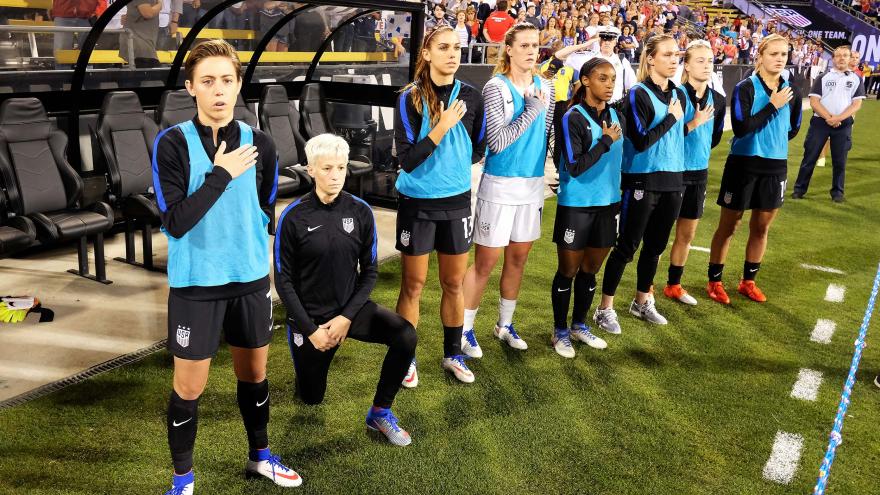 (CNN) -- The US Soccer Federation announced Wednesday it has repealed its policy requiring players to stand during the National Anthem.

The statement follows widespread protests decrying police brutality and racism after the death of George Floyd, an unarmed black man, in police custody. It also comes after the National Football League commissioner announced the league was wrong not to listen to players' concerns about racism earlier.

In their statement, US Soccer said its board of directors voted Tuesday to repeal their policy, which was put in place after US Women's National Team midfielder Megan Rapinoe kneeled in solidarity with Colin Kaepernick's protests. Kaepernick, a former quarterback for the San Francisco 49ers, began kneeling before games in 2016 and remains unsigned to a team since 2017.

The federation said it hasn't yet used its platform effectively to address issues like racism, discrimination and inequality and vowed to do so moving forward.

"We are here for our players and are ready to support them in elevating their efforts to achieve social justice. We cannot change the past, but we can make a difference in the future. We are committed to this change effort, and we will be implementing supporting actions in the near future," the statement read.

NFL admits it was wrong

Earlier this month, NFL Commissioner Roger Goodell said the league should have listened to its players about racism concerns sooner.

"We, the National Football League, admit we were wrong for not listening to NFL players earlier and encourage all to speak out and peacefully protest," Goodell said.

But the commissioner faced criticism for what he didn't say: Goodell didn't mention Kaepernick, who saw heavy backlash following his peaceful protests on the field.

Some players called on the league to acknowledge and apologize to Kaepernick and help him find a way back to the sport.

"I think if they sign Kaep back, that'll show that they're really trying to move in a different direction," Seattle Seahawks' new signing Carlos Hyde said previously. "Because Kaep was making a statement four years ago about what's going on in today's world and the NFL didn't bother to listen to him then, so I think they should start by doing that."