US Space Force unveils its official flag at the White House 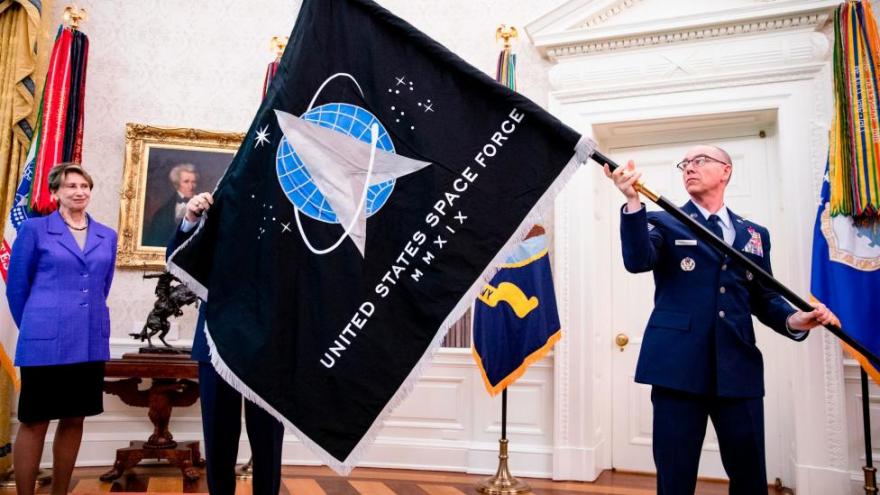 The US Space Force, the newest branch of the armed services, has unveiled its official flag.

(CNN) -- The US Space Force, the newest branch of the armed services, has unveiled its official flag.

The flag made its debut Friday in a presentation in the Oval Office. Defense Department officials presented the flag to President Donald Trump, who also signed the 2020 Armed Forces Day Proclamation, in what he called "a very special moment."

"We should have started this a long time ago, but we made up for it in spades. We have developed some of the most incredible weapons anyone's ever seen. It's moving along very rapidly, and we have tremendous people in charge," said Trump at the unveiling.

The Space Force marks the first new service and accompanying service flag in more than 72 years, according to the White House. There are 16,000 professionals assigned to the military branch, according to Chief of Space Operations Gen. John Raymond.

The dark blue and white flag is emblazoned with "United States Space Force" and Roman numerals MMXIX (2019) and features a globe, a Delta Wing, an elliptical orbit, a white Polaris, two clusters of small stars and three larger stars, according to the White House.

The design is meant to represent the vast recesses of outer space, with the globe signifying the Space Force fighters' home and the Delta Wing drawing the force's ties to the US Air Force in symbolizing change and innovation. The elliptical orbit is meant to signify defense and protection, as well as interagency cooperation and allied partnerships, and the white Polaris represents the force's constant vigilance, the White House said.

The flag was produced by artists and crafts people at the Defense Logistics Agency flag room in Philadelphia and approved by Trump this past January, the same month the seal for the newest branch of government was unveiled.

The official unveiling comes almost two years after Trump directed the Department of Defense and the Pentagon to establish a Space Force. They officially became the sixth branch of armed forces last December when Trump signed the annual National Defense Authorization Act into law, and announced Raymond would be the first Chief of Space Operations.

"Space is going to be the future. Both in terms of defense and offense and so many other things," Trump said Friday. "Already, from what I'm hearing and based on reports, we are now the leader in space."