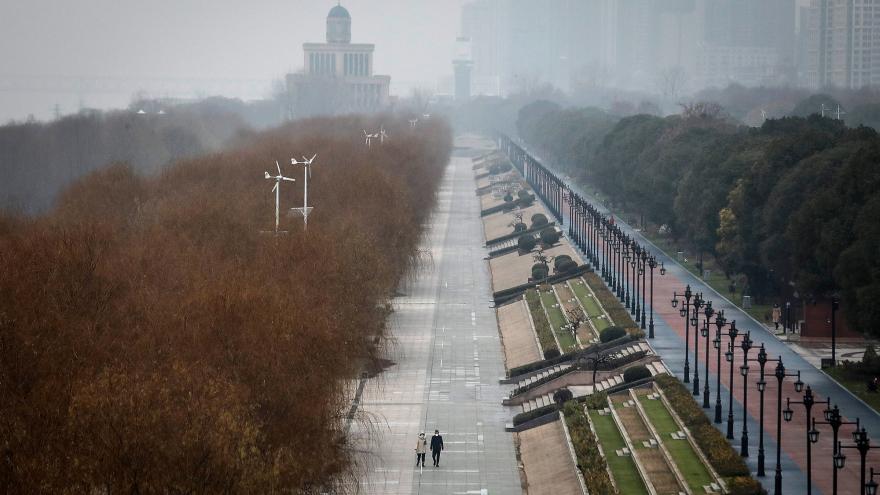 (CNN) -- A California-bound flight chartered by the US State Department left the China city at the epicenter of the coronavirus outbreak on Wednesday morning local time, a department spokesman said.

About 240 Americans could be on the flight from Wuhan Tianhe International Airport. It will stop to refuel in Anchorage, Alaska, before arriving early Wednesday in Ontario, California, about 35 miles east of downtown Los Angeles, according to Alaska Department of Health and Social Services spokesman Clinton Bennett.

While in Anchorage, passengers will be screened by US Centers for Disease Control and Prevention officials, who will decide if they are healthy enough to continue on to California.

"Any passenger(s) who are found to have cough, fever, or shortness of breath in Anchorage will be further assessed by CDC and DHSS medical experts," a news release from the Alaska DHSS says.

There will be three health checks for people on the flight, according to Ivar Satero, director of the San Francisco International Airport.

And when the plane arrives in California, one official told CNN the group of citizens may be forced to stay in isolation between three days and two weeks.

Authorities are setting up beds, phone chargers and televisions in an isolated, dormant hangar at Ontario International Airport, Curt Hagman, the chairman of the San Bernardino County Board of Supervisors, said.

Who is on board

About three dozen US diplomats and their families are expected to be on board the aircraft, a US official with knowledge of the matter told CNN. The State Department has said American citizens could board on a reimbursable basis if space is available.

Priority was given to US citizens who are "most at risk for contracting coronavirus" if they stay in the city, a State Department official said. There are about 1,000 Americans living in Wuhan.

"All passengers will be subject to CDC screening, health observation, and monitoring requirements," the State Department said in a statement.

The State Department said it was unable to accommodate everyone due to space limitations.

"The Department of State is working diligently with the government of China to identify alternative routes for US citizens to depart Wuhan over land," said an automated email reply from the US Embassy in Beijing.

CDC monitoring some US airports

The State Department issued a Level 4 advisory for Wuhan, meaning "no American should travel to Wuhan while this virus continues to have impact," Vice President Mike Pence said Monday.

The department also ordered personnel working at the US Consulate General in Wuhan -- the epicenter of the outbreak -- to depart for the United States, the official said in a statement Monday.

The order came on the same day as the CDC said on its website that it was monitoring for symptoms of the Wuhan coronavirus at 20 US airports.

The European Commission said it was sending two aircraft to evacuate European Union citizens out of Wuhan, according to a statement Tuesday.

The EU will cofinance the transport costs, with the first aircraft scheduled to depart from France on Wednesday morning and the second later this week, said Janez Lenarcic, commissioner for crisis management, in a statement.

About 250 French citizens will be transported in the first aircraft and more than 100 EU citizens from other countries will be on board the second flight, the statement said.

Other countries, including South Korea and Japan, will send in charters to evacuate its nationals from the epicenter of the outbreak.

More than 100 people have died

The virus can be spread before any symptoms appear, Chinese health authorities said Sunday, meaning carriers may not realize they are infected before they transmit the virus to others.

Ted Stevens Anchorage International Airport manager Jim Szczesniak said the amount of time the jet chartered by the State Department is on the ground in Alaska likely will be "measured in hours."

State Chief Medical Officer Dr. Anne Zink said Monday that passengers will all receive health screenings when they arrive at an unused terminal of the airport.

Ontario Airport said in a statement Monday it has been working closely with federal, state, county and city partners to prepare for the arrival of the Wuhan flight. The airport has "conducted extensive training in managing situations such as this" and health, safety and security preparations are underway ahead of the flight's planned arrival, the statement read.

Ontario Airport will operate under normal operations during the flight's arrival, and the facility is taking steps to minimize risk to other travelers, staff, and the community, the statement read.