US Surgeon General issues advisory on teen use of e-cigarettes 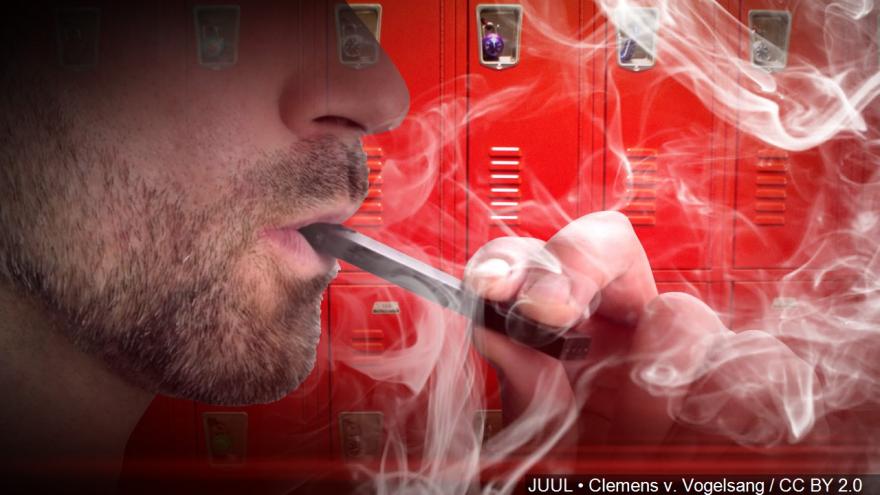 (CNN) -- Prompted by an unprecedented spike in the use of e-cigarettes among teens, the US Surgeon General issued a call to action for parents, teachers and health professionals about the negative health consequences of e-cigarettes at a news conference Tuesday.

"Our youth today recognize that cigarettes are not cool and not safe," Adams said. However, they mistakenly believe e-cigarettes are "cool" and "safe," he added.

"Studies show youth like my son [who is 14] have no clue what's in these products," said Adams. Meanwhile, a third of kids who have used e-cigs have used marijuana in them.

"The bottom line," according to Alex M. Azar II, the US Secretary of Health and Human Services, is that "in the datasets we use, we have never seen use of any substance rise this rapidly."

The percentage of high school-age children reporting past 30-day use of e-cigarettes rose by more than 75% between 2017 and 2018, while use among middle school-age kids increased nearly 50%, the National Youth Tobacco Survey showed. Meanwhile, the National Institutes of Health's Monitoring the Future survey, released Monday, recorded a single year surge with more than 37% of 12th graders reporting use in the past year compared to nearly 28% in 2017.

The skyrocketing rise in e-cigarettes comes at a time when there are "encouraging signs elsewhere" -- namely, the fact that alcohol use, tobacco use and opioid use among youth have declined, said Azar.

However, the epidemic of vaping could contribute to "a whole generation addicted to nicotine," he said noting that no amount of nicotine is safe.

"I'm talking about my own kids," said Adams. "My 14, 13, and 9-year olds are all familiar to these products since elementary school."

Misconceptions and myths surrounding e-cigarettes contribute to the epidemic, he added. Meanwhile, parents do not even know what signs to look for or what questions to ask their kids.

Which is why Adams took the step of issuing an advisory. It's the second time he's taken such action. In April, he issued an advisory to get more Americans to carry the opioid overdose antidote Naloxone.

E-cigarettes are not harmless

Like regular cigarettes, most e-cigarettes contain nicotine, an addictive drug that harms the developing brains of teens. Because the brain continues to develop until about age 25, nicotine's negative health effects include damage to learning, memory and attention abilities. Add to that, teens who use nicotine are at increased risk for addiction to other drugs.

"The number one reason teens say they use these products is because they say they have flavors in them," said Adams, who noted that many e-cigarettes come in kid-friendly flavors.

Sarah Ryan, a high school senior from Holbrook, Massachusetts, who also spoke at the press conference, said there are over 8,000 flavors. Some "taste like Sour Patch Kids," she said. The flavors hide the nicotine, which most kids don't even know is there, she added.

Some of the chemicals used to make certain flavors may also pose health risks, according to Adams. In addition to nicotine, the vapor from e-cigs may include other harmful substances, including heavy metals, volatile organic compounds, and ultrafine particles that can be inhaled deeply into the lungs.

While e-cigarettes may contain less harmful chemicals than other tobacco products, Adams cautioned, "Less harm does not mean harmless."

Kids, though, believe it's just "water and flavor," said school substance abuse counselor Mila Vascones-Gatski who also spoke at the news conference. The smell is more difficult to detect and the cloud of vapor dissipates so quickly it's hard for anyone to see, though increasingly teachers report kids are vaping in a classroom. "How do we know? They take selfies of themselves vaping in the classroom," she said.

The surge in e-cigarette use among teens has been fueled by cartridge-based devices, which look like a USB flash drive. The newest devices are not only easy to conceal but most parents would not recognize them as anything other than a tech item. The most ubiquitous version is called JUUL, which now has more than a 70% share of the cartridge-based e-cigarette market in the United States, according to the surgeon general.

A typical JUUL cartridge, or "pod," contains about as much nicotine as a pack of 20 regular cigarettes.

Ryan said a 6th grader told her, "it was easier to get someone to loan him a Juul than a pencil."

She also said that this year, e-cigarette use "really spread like wildfire." Her high school had to shut down one of the bathrooms due to vaping, she said, while some kids have been caught vaping during class. Meanwhile, she said a convenience store directly across the street from her school has sold e-cigarette products.

Targeting those who sell to kids

Convenience stores are one of the targets of the US Food and Drug Administration, according to Commissioner Dr. Scott Gottlieb, who also spoke at the news conference. With him at the helm, the agency has taken aggressive steps and will continue to do so over the next couple of months. He hopes to limit both the access and appeal these products have to kids, which he will try to accomplish by stepping up enforcement activities at stores where kids get access to e-cigarettes.

"It's my belief that we've been successful in this country at stigmatizing tobacco products among kids," said Gottlieb. "We haven't been effective stigmatizing e-cigarette use."

Adams applauded the FDA in September for launching a campaign to prevent kids from using e-cigarettes.

Tuesday he recognized the potential of e-cigarettes as a tool of harm reduction among adults who are addicted to traditional cigarettes, but added that today's conference prioritized alerting parents, teachers and health officials about the dangers of youth e-cigarette use.

"We will not stand for another year of exponential rise in the use of these products," said Adams. "We're far too often -- in health and public health -- late to the game. Now is the time to take action."