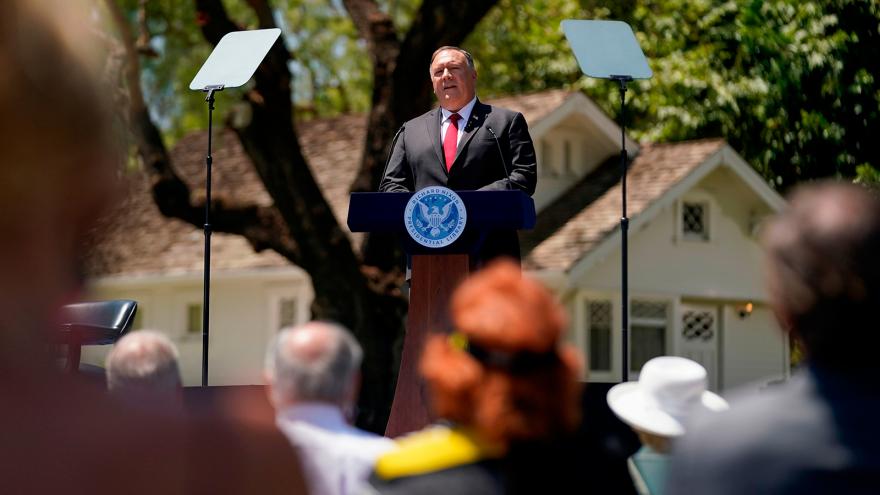 (CNN) -- The United States government has officially suspended its extradition treaty with Hong Kong over concerns that the Chinese government's new national security law is eroding the city's autonomy.

In a statement Wednesday, the US State Department announced Washington would be suspending or eliminating three treaties with the former British colony, including "the surrender of fugitive offenders, the transfer of sentenced persons, and reciprocal tax exemptions on income."

The US government accused Beijing of undermining "the high degree of autonomy that (the Chinese government) promised to the United Kingdom and the people of Hong Kong for 50 years under the UN-registered Sino-British Joint Declaration."

US Secretary of State Mike Pompeo said on his official Twitter that the agreements had been suspended because the ruling Chinese Communist Party had chosen "to crush the freedoms and autonomy of the people of Hong Kong."

Since its handover from Britain to China in 1997, Hong Kong has enjoyed a special trade and security status with the United States, predicated on the financial hub's high degree of autonomy from Beijing.

Critics, including the US government, contend that the new law has a had major chilling effect on the city's civil liberties and deeply undermines freedom of speech and freedom of the press.

On July 14, US President Donald Trump signed an executive order to end Hong Kong's special trading status with the US in response to Beijing's national security law.

"Hong Kong will now be treated the same as mainland China. No special privileges. No special economic treatment and no export of sensitive technologies," he said.

The US is the latest country to suspend its extradition treaty with Hong Kong following the passage of the new security law. Canada, Australia, France, Germany and the United Kingdom have all put their extradition agreements with the city on hold since the law was passed.

"The wrong actions of Canada, Australia and the United Kingdom to politicize Hong Kong's judicial cooperation have seriously damaged the basis of judicial cooperation ... and the maintenance of justice and the rule of law," Ministry of Foreign Affairs spokesman Wang Wenbin said on July 28.