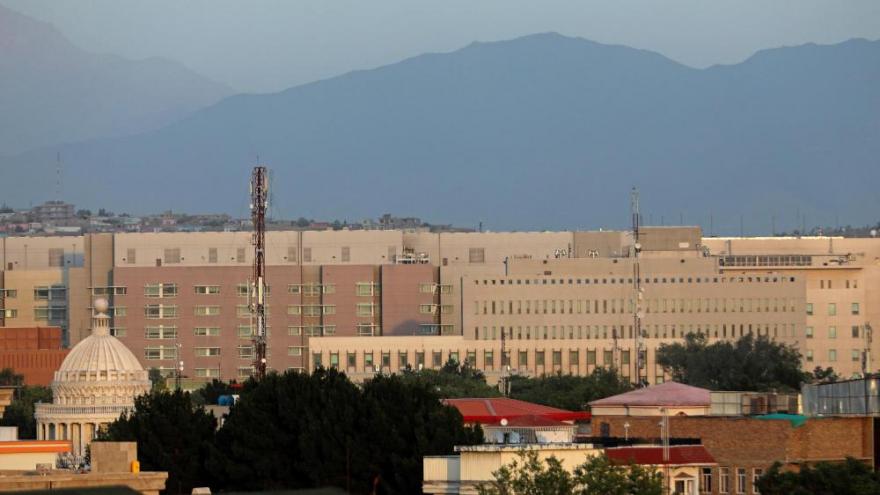 The United States is considering relocating its embassy to the Kabul airport amid the deteriorating security situation in Afghanistan, a US official, Western diplomatic source and another source familiar with the situation told CNN.

(CNN) -- The United States is withdrawing personnel from its embassy in Kabul amid the deteriorating security situation in Afghanistan, leaving only "a core diplomatic presence," the Biden administration announced Thursday as more cities fell to the Taliban.

Three thousand US troops are being deployed to assist with the drawdown, which is expected to be completed by the end of August, Pentagon spokesperson John Kirby said.

In addition, the US is considering relocating the US embassy to the Kabul airport, a US official, a Western diplomatic source and another source familiar with the situation told CNN.

Thursday's stunning developments come weeks ahead of the intended end of the US' two-decade military campaign in Afghanistan and as the Taliban have rapidly seized control of at least 12 provincial capitals in Afghanistan.

In the hours leading up to the announcement of the embassy drawdown, national security officials held a series of calls and meetings with a growing sense of urgency about the accelerating Taliban gains, sources said. The administration has assessed that the Taliban's military capability is at its strongest since 2001. Even so, the group's gains have occurred much more rapidly than many US officials expected, and US intelligence assessments indicated that Kabul could become isolated -- possibly susceptible to collapse -- within months, if not weeks.

State Department spokesperson Ned Price said the reduction "to a core diplomatic presence" was being made "in light of the evolving security situation."

"Our first responsibility has always been protecting the safety and the security of our citizens serving in Afghanistan and around the world. As we have said all along, the increased tempo of the Taliban military engagement and the resulting increase in violence and instability across Afghanistan is of grave concern," he said at a department press briefing.

Pentagon spokesperson Kirby said that three infantry battalions -- two from the US Marines and one from the US Army -- would arrive in the next 24 to 48 hours, joining the more than 650 troops already in Afghanistan to assist with the military withdrawal.

Secretary of State Antony Blinken and Austin spoke with Afghan President Ashraf Ghani on Thursday to coordinate planning for the drawdown, Price and Kirby said.

Price called the measure a "prudent" one in light of the conditions on the ground and rejected the notion that the reduction in personnel is a prelude to a full evacuation of the diplomatic outpost.

"This is not a full evacuation," he said. "The embassy remains open and we plan to continue our diplomatic work in Afghanistan."

Price would not address questions about the potential relocation of the embassy to the Kabul airport, saying only that they "are always ... reviewing the environment in especially complex operating environments; of course that includes Kabul."

A US official told CNN earlier on Thursday that options were being weighed in real time but cautioned that the situation remains fluid. They indicated that decisions are likely to evolve in the days and weeks ahead given the rapidly changing situation on the ground. "There's obviously a dramatically different tempo to the discussions currently under way. But there are a lot of different equities that need to be weighed right now," the US official said.

The Western diplomatic source described a relocation to the airport as one of the possibilities being discussed, calling it "the most probable." They said there is a lot of expedited planning going on about the broader future diplomatic presence in Kabul, saying the "mood has changed but we are still not at the collapse."

This source said the US could make the move to the airport in order to be able to get diplomats out of the country faster if it becomes necessary, and also because in the future, there could be challenges in getting from the embassy to the airport.

Even amid the deteriorating situation on the ground, administration officials have made no indication that Biden will reconsider his decision to withdraw all US troops from the country. Kirby claimed that even with the surge of forces into the country, "the drawdown itself is still on track to be complete by August 31."

'Doing everything we can'

However, the US military will also now pursue an "additional mission set of helping process special immigrants," Kirby said, with a joint US Army-Air Force support element of around 1,000 personnel set to arrive in Qatar in the coming days.

Price told reporters Thursday that 1,200 Afghan Special Immigrant Visa applicants and their families have been relocated to the US "and you're going to see the total number grow very quickly in the coming days and in the coming weeks." The administration has said it intends to relocate other Afghans who worked alongside the US government over the past two decades to third countries, but has yet to announce which countries have agreed to house them.

In the meantime, tens of thousands of Afghans who remain in the Special Immigrant Visa application pipeline, along with thousands of others who worked for the US government, media organizations or nongovernmental organizations but do not qualify for the SIV program, face an uncertain fate, fearful for their lives amid reports of Taliban reprisal.

The State Department spokesperson insisted that the US is not abandoning the people of Afghanistan.