US to welcome 100,000 Ukrainian refugees 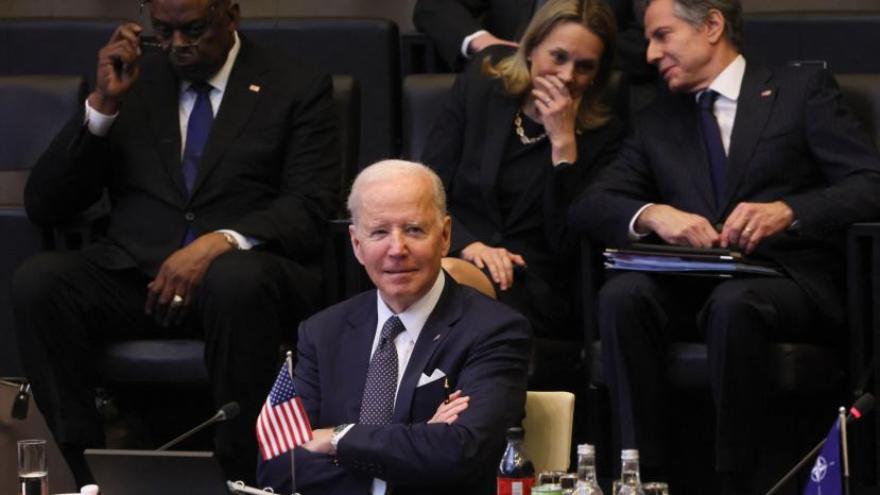 U.S. President Joe Biden looks on as he attends a North Atlantic Council meeting during a NATO summit at NATO Headquarters in Brussels on March 24.

(CNN) -- The United States will welcome up to 100,000 Ukrainians and others fleeing Russia's aggression, a senior administration official announced Thursday.

"To meet this commitment, we are considering the full range of legal pathways to the United States," the official said, which includes US refugee admissions program, parole and immigrant and non-immigrant visas.

More than 3.5 million refugees have now fled Ukraine, according to data from the UN refugee agency released on Tuesday. A vast majority of those refugees have fled to Ukraine's western neighbors across Europe.

The official said the White House will not have to ask Congress to expand the current cap on annual refugees, which is set at 125,000 for fiscal year 2022, because it is more of a "long-term commitment" and there will be other avenues for many of those Ukrainians to enter the United States.

"We still have a significant capacity within the 125,000 so we don't currently envision the need to go beyond that," the official said.

In a fact sheet about the new effort, the White House reiterated its view that it expects "many Ukrainians will choose to remain in Europe close to family and their homes in Ukraine."

The official said that the administration is working to expand and develop new programs with "a focus on welcoming Ukrainians who have family members in the United States."

There will be an emphasis on protecting the most vulnerable among the refugee populations, including members of the LGBTQI+ community, those with medical needs, journalists and third-country nationals.

"By opening our country to these individuals, we will help relieve some of the pressure on the European host countries that are currently shouldering so much of the responsibility," the official added.

The announcement comes ahead of President Joe Biden's Friday visit to Poland, which is, in part, intended to highlight the massive refugee crisis that has ensued since Russia's war in Ukraine began a month ago.

Poland, which borders Ukraine to the west, has registered more than 2 million Ukrainian refugees crossing into the country. However, the number of refugees still staying in Poland is lower, with many continuing on in their journey to other countries.

When Vice President Kamala Harris traveled to Poland earlier this month, Polish President Andrzej Duda personally asked her to speed up and simplify the procedures allowing Ukrainians with family in the US to come to the country. He also warned Harris that his country's resources were being badly strained by the influx of refugees, even as Poland welcomes them with open arms.

The US has been considering a number of options to address the refugee crisis, including expediting the US refugee admissions process for Ukrainians and aiding Europe with the influx of refugees across the region.

Biden recently signed a spending bill into law that provides more than $4 billion in humanitarian assistance for Ukraine, including $1.4 billion to assist help with the refugee crisis.

Before Thursday's announcement, the Biden administration had already taken steps to extend relief to Ukrainian refugees amid the crisis, including by moving to allow Ukrainians who are in the US to remain in the country under a form of humanitarian relief.

This story has been updated with more details.