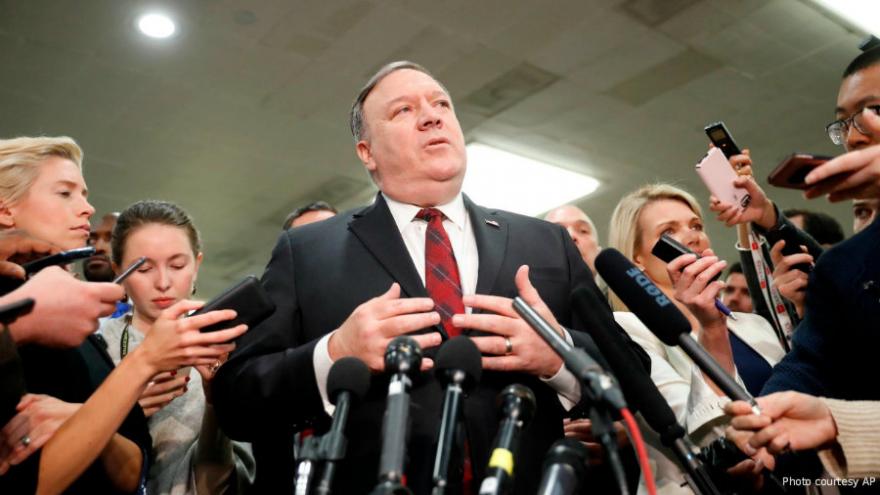 (CNN) -- Secretary of State Mike Pompeo announced Tuesday that the US will stop adhering to a decades-old nuclear treaty in 60 days unless Russia returns to compliance with the agreement.

"The United States declares today it has found Russia in material breach of the treaty and will suspend our obligations as a remedy effective in 60 days unless Russia returns to full and verifiable compliance," Pompeo said at a NATO meeting in Belgium.

Pompeo said Russia's violations of the Intermediate-Range Nuclear Forces Treaty undermine American national security and as such, the US should not be "constrained" by a treaty that hampers its ability to respond.

Pompeo cast Russia's violation of the treaty, which the Kremlin denies, as part of a wider web of destabilizing behavior, including Moscow's recent clash with Ukraine in the Kerch Strait.

"These violations of the INF treaty cannot be viewed in isolation from the larger pattern of Russian lawlessness on the world stage," he declared. "The list of Russia's infamous acts is long: Georgia, Ukraine, Syria, election meddling, Skripal and now the Kerch Strait, to name just a few."

Pompeo said that despite Moscow's INF violations, "the United States has remained in scrupulous compliance with the treaty."

"On at least 30 occasions since 2013, extending to the highest levels of leadership, we have raised Russia's noncompliance and stressed that a failure to return to compliance would have consequences," he described. "Russia's reply has been consistent: deny any wrongdoing, demand more information, and issue baseless counter-accusations."

The treaty's signing during the waning years of the Cold War was seen as a watershed moment, helping to eliminate thousands of land-based missiles with ranges between approximately 300 and 3,400 miles.

"We call on Russia to return urgently to full and verifiable compliance," the statement said. "It is now up to Russia to preserve the INF Treaty."

Russian Foreign Ministry spokeswoman Maria Zakharova on Tuesday rejected accusations from the US and NATO that Moscow is in violation of the INF nuclear missile treaty.

"Russia sticks to the clauses of the treaty without an exception and the American side is well aware of that," she told CNN.

"While Russia is responsible for the demise of the treaty," Pompeo added, he also appeared to criticize the narrowness of the INF.

Other nations such as China, North Korea and Iran are not party to the treaty, Pompeo said, and "this leaves them free to build all the intermediate range missiles that they would like."

Pompeo said he worked with his counterparts at the NATO meeting to achieve "complete unity around this."

"We believe this is the right outcome," he said.

"There is complete unanimity that the Russian action was lawless and unacceptable and deterrence must be restored and that is a collective commitment of Europe and the world to deny Russia the capacity to continue to violate basic international law norms," he said.

He cited Russia's recent clash with Ukraine, saying the US hoped the Russians would return captured Ukrainian soldiers "immediately."

"We will collectively develop a set of responses that demonstrate to Russia that this behavior is simply unacceptable," Pompeo said. He did not detail what those responses might be.

Pompeo's remarks follow President Donald Trump's announcement in October that he intended to pull out the 1987 accord.

After Trump's October comments, the Russian government ratcheted up the rhetoric, saying it would be forced "to take measures" if the United States began developing new missile systems.

On Tuesday in Brussels, Pompeo made clear that NATO is now looking to Russia to act.

"The burden falls on Russia to make the necessary changes. Only they can save this treaty," he said. "If Russia admits its violations and fully and verifiably comes back into compliance, we will of course welcome this course of action."

"The United States and our NATO allies stand vigilant that Russia's lawless conduct will not be tolerated in the realm of arms control or anywhere else," he said.

Pompeo noted that during the 60-day period, the US would continue to adhere to the treaty: "we will not test or produce or deploy any systems."

The secretary of state also said the US had talked to the Russians "a great deal," and while Washington was "hopeful" Moscow would change course, US officials didn't see indications that would happen.

Some analysts have suggested that the Trump administration's aversion to international agreements and the views of national security adviser John Bolton are another driving force behind the decision to leave the INF. Democrats on Capitol Hill have urged the administration not to abandon the treaty.

"It's clear that Russia is guilty of recurrent and egregious violations of the INF Treaty," House Foreign Affairs Committee Ranking Member Rep. Eliot Engel, D-New York, said in a statement Tuesday. "These dangerous breaches of the agreement undermine the Transatlantic security architecture and constrain regional progress toward stability."

"However, our immediate task should be to work with our European allies to bring Russia back into compliance, not to unilaterally withdraw from the Treaty. We must act responsibly and do everything we can to minimize the risk of rekindling an arms race," Engel said.

"Moving forward, before taking steps to withdraw or suspend participation in the INF Treaty, we urge you and your administration to engage with Congress on the implications of this step for strategic stability and our relations with European and Asian allies," the senators wrote.