US troops sheltered in Saddam-era bunkers during Iran missile attack 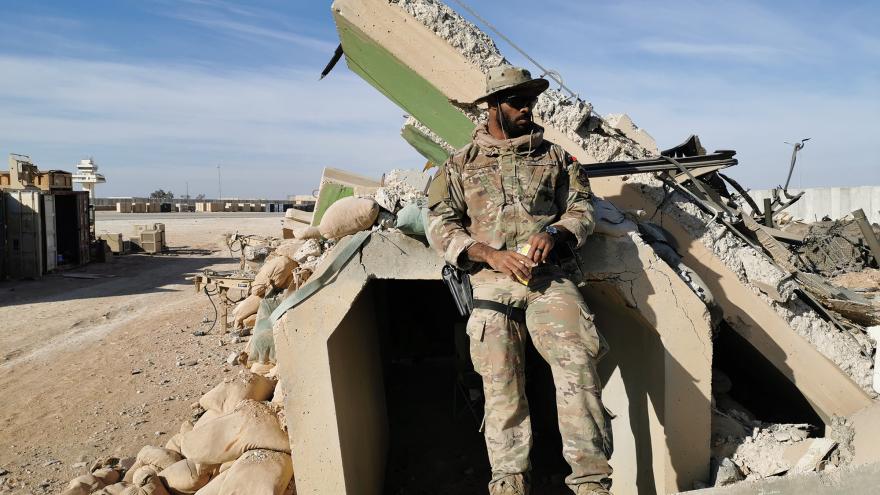 (CNN) -- Akeem Ferguson was in a bunker when his team received the bone-chilling radio transmission: Six Iranian ballistic missiles were headed in their direction.

The concrete slab they had taken cover under offered little protection from projectiles that US troops in Iraq were being attacked with.

"I held on to my gun and put my head down and I tried to find a happy place, so I started singing to my daughters in my head," said the six-foot tall US staff sergeant. "And I just waited. I hoped that whatever happened, that it was quick."

Ferguson survived unscathed along with other US troops and civilian contractors on Iraq's al-Assad base, after a barrage of Iranian ballistic missiles on the morning of January 8.

The strike was the widest scale attack on a base housing US troops in decades. Troops said the absence of casualties was nothing short of a "miracle."

American troops stationed at the base are helping to counter ISIS and train Iraqi security forces. No Iraqi troops were hurt in the attack.

A closer look at the site reveals a base vulnerable to this type of assault. Personnel received advance warning of the strike several hours before it took place, enabling them to take cover. Still they lacked the surface-to-air defenses to fend off a ballistic missile assault -- US military did not build structures on the base, one of the oldest and largest in Iraq, to protect against an attack of this kind. They were at the mercy of the downpour of missiles.

Near the airfield, shards of metal crack underfoot as two military personnel take measurements of the gaping crater left behind by one of the missiles. It is around 2 meters deep and roughly 3 meters in diameter -- a burned copy of "Beauty and the Beast" teeters on the edge of the hole. A flip-flop, an Uno card, and a military jacket stick out from the charred wreckage left in the wake of the missile.

This was a housing unit for drone pilots and operators on the base. They evacuated the unit before the strike. Incidentally, the they had nicknamed the living quarters "chaos."

Like most of the US section of the base, they had already been on lockdown at bunkers for over two hours when the first missiles landed.

The strike was an Iranian response to the US drone attack, ordered by US President Donald Trump, that killed Iran's most powerful general, Qasem Soleimani, less than a week before.

After days of anticipation, Tehran's zero-casualty retaliation came as a relief to many. At al-Asad camp, troops could rest easy after days of heightened alert. For countries across the region, it marked a welcome climbdown after the killing of Soleimani raised the specter of region-wide war.

Ten of the 11 missiles struck US positions at the sprawling desert Iraqi airbase. One struck a remote location on the Iraqi military's side.

Roughly one-third of the base is controlled by the US. The Iranian missiles, which used on-board guidance systems, managed to shred sensitive US military sites, damaging a special forces compound, and two hangars, in addition to the US drone operators' housing unit.

CNN journalists were the first to be granted access to the base after the Iranian attack.

The first warning came from secret intelligence signals in the evening before the attack. By 11 p.m. on January 7, most of the US troops at al-Asad were sent to bunkers, and a few had been flown out, according to commanders at the base.

Only essential personnel, such as tower guards and drone pilots, would remain unsheltered. They were protecting against a ground assault which base commanders expected would follow the missile attack.

Ground forces never came, and troops would only re-emerge from their shelters at the break of dawn. The strike had ended just before 4 a.m.

Iraqi Prime Minister Adil Abdul Mahdi has said he was told by Iran, at around midnight, to expect airstrikes inside his country. An Arab diplomat who CNN spoke to said that the Iraqis passed on information about the strikes to the US.

But the US had already received reporting about a ballistic missile attack by the time the Iraqis could notify them, according to al-Asad's Lt. Col. Tim Garland.

The first missiles fell at 1:34 a.m. They were followed by three more volleys, spaced out by more than 15 minutes each. The attack lasted over two hours. Troops on the base described it as a time fraught with suspense, fear and feelings of defenselessness.

"You can defend against (paramilitary forces), but you can't defend against this," said Capt. Patrick Livingstone, US Air Force security forces commander on the base, referring to previous rocket attacks by armed groups. "Right now, this base is not designed to defend against missiles."

Ill-equipped to defend against ballistic missiles

As the expected attacks drew nearer, most troops filed into dusty, pyramid-like structures peppered throughout the base. These bunkers were built during the rule of deposed President Saddam Hussein.

The thick, slanting walls were constructed decades previous to deflect blasts from Iran. Baghdad had a bloody eight-year war with Tehran (1980-1988) which ended with a stalemate. It was a time when the new Islamic Republic was beginning to demonstrate its military prowess.

US troops said that they were unsure whether the Saddam-era shelters would withstand the ballistic missiles. But they were more sturdy than US bunkers, made to protect against rockets and mortars.

Relatively light-weight rockets and mortars are typically used by ISIS, jihadi extremists and Shia paramilitary in Iraq, who for years have had US troops in their crosshairs. But Iranian ballistic missiles have a far longer range and carry a far bigger payload of explosives -- estimated to be at least half a ton each.

Footsteps echo in a narrow passageway leading into the Saddam-era bunker. The walls are double-layered -- large holes in the interior reveal the coppery outer wall embedded with fans. Two spacious living areas are filled with folding beds, mattresses, stretchers and lockers. On the night of the attack, one of the rooms doubled as a makeshift bathroom, with cut up plastic water bottles serving as urinals.

Lt. Col. Staci Coleman was one of the US team leaders who corralled troops into such a bunker. After about an hour and a half of being in the shelter, she had doubts.

"I was sitting in a bunker and I was like man, maybe I made the wrong decision [to come down here]," said Coleman.

"The whole ground shook. It was very loud," she said. "You could feel the blast wave in here. We knew they were close."

She said the doors appeared to bend like waves with every hit that reverberated through the shelter. None of the bunkers on the base were impacted.

Meanwhile, Staff Sgt. Ferguson was in a US-made bunker -- a crammed space held together by slabs of five-inch concrete fortified by sandbags. He watched the attack unfold through cracks between the adjacent walls.

"There's a little hole on the side of the shelter and we saw a flash of orange light," said Ferguson. "After that we figured that every time we see a flash it's just a couple of seconds before it's going to hit.

"It was Flash. Boom. Flash. Boom. We didn't know when it was going to stop. We sat there and waited for it to end."

After the first volley, several went out to look for casualties. When the second volley hit nearly 15 minutes later, some were caught in the open.

Ferguson said he was worried about comrades who were trapped outside. "After the second volley was over, I was worried about them being at the gate. So I left and went and grabbed them, brought them back to the shelter with us, and then we waited..." he said.

At the time of the expected ground assault, Ferguson had emerged from his bunker to face off with whatever came next. He described peering into the darkness over their gunsights, worn out by the shock of the missiles. But the attack never came.

"We were so tired. It was the worst adrenaline rush ever," said Ferguson.

When troops had all emerged from the bunkers, many went to work, repairing the damage. They described feeling a mixture of relief and shell-shocked. "It was 'normalish' afterwards," said Coleman. "But we were all looking each other in the eye as if to say 'are you ok?'"

Several troops CNN spoke to said the event had shifted their view of warcraft: the US military is rarely on the receiving end of sophisticated weaponry, despite launching the most advanced attacks in the world.

"You looked around at each other and you think: Where are we going to run? How are you going to get away from that?" said Ferguson.

"I don't wish anyone to have that level of fear," he said. "No one in the world should ever have to feel something like that."