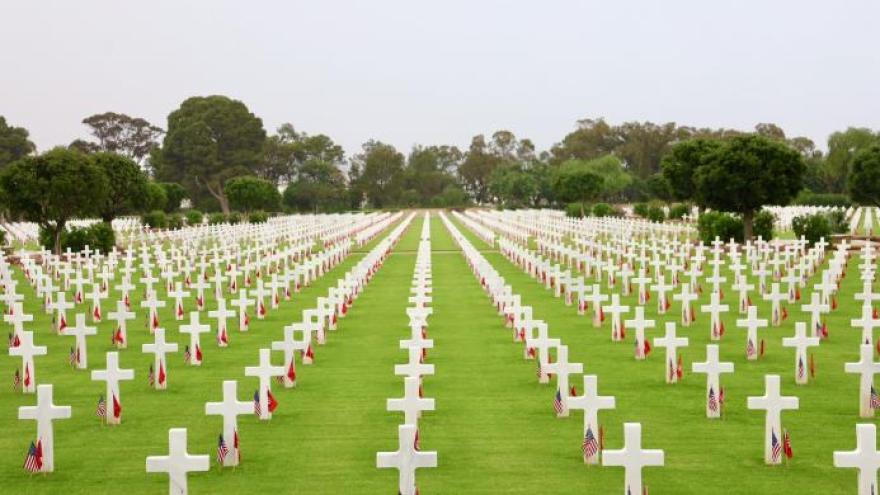 The North African American Cemetery in Carthage, Tunisia as a US flag and a Tunisian flag stand near every headstone.

(CNN) -- The US is set to bring home and identify the remains of unknown World War II soldiers from the only American cemetery in Africa, the US Embassy in Tunisia said on Monday, Memorial Day.

The announcement comes after the US and Tunisia signed a memorandum of understanding that will allow the US to exhume the remains of unknown soldiers from the North African American Cemetery and repatriate them for identification and reunification with family members.

"We owe our fallen heroes and their families a profound debt of gratitude," said the embassy's chargé d'affaires, Natasha Franceschi. "Today's historic agreement will ensure American service men and women who gave their lives to defend our freedom are recognized and honored for the ultimate sacrifice they gave to our country."

The cemetery in Carthage, Tunisia, near the Mediterranean Sea is the burial site for 2,841 US service members from the North African campaign. The Wall of the Missing, a memorial wall bordering the cemetery, lists the names of 3,724 service members who went missing in action and have never been found.

It's not clear how many sets of remains will be brought back to the US.

The Allied taking of Tunisia provided a foothold for the invasion of Europe during World War II. Despite early successes for German and Italian forces, the Axis powers lost their grip on Tunisia against the Allied forces, who were better supplied. By the summer of 1943, the Allies had taken Tunisia, driving out what remained of the Axis forces.

The North African American Cemetery, for service members who perished in the campaign, was founded in 1960, but the US was never able to exhume and attempt to identify the remains of unknown soldiers.

The newly signed memorandum of understanding will finally allow the US to begin the often-difficult process of exhuming the remains and identifying them. The embassy did not say how soon that would begin.

An official from the Defense POW/MIA Accounting Agency also attended the signing ceremony. That agency's mission is to recover American military personnel and identify them using a combination of forensic science technology and military records.

CORRECTION: This story has been updated to make clear it is unknown how many sets of remains will be brought back to the US.