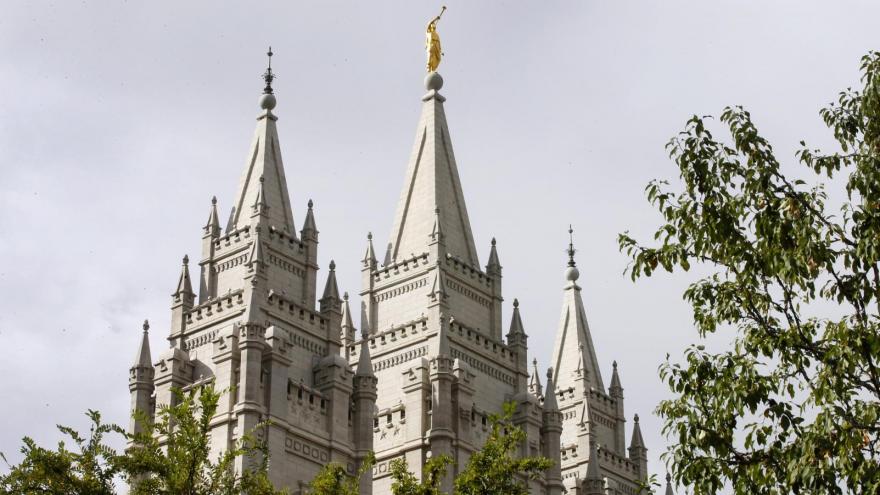 A statue of the Angel Moroni sits atop the Salt Lake Temple in a 2015 photo. The temple was damaged on March 18, 2020 in an earthquake that also dislodged Moroni's trumpet.

The temple is the spiritual focal point for the 16 million members of The Church of Jesus Christ of Latter-day Saints.

"The trumpet on the Angel Moroni statue fell off, and there is minor displacement of some of the temple's smaller spire stones," said Daniel Woodruff, a spokesman for the church.

The earthquake didn't injure any workers, Woodruff said, adding that the Salt Lake Temple has been closed to the public while undergoing a seismic upgrade.

In addition to Moroni's trumpet falling off, some the temple's smaller spire stones were displaced, the church said. No other damage was reported.

Aerial photos show the fallen trumpet appeared to land on the roof of the temple near the base of its spires.

The Salt Lake Temple, dedicated in 1893, was the first temple topped with Angel Moroni, according to the church. The 12-foot-5-inch statue, made of copper and gold leaf, stands on a stone ball atop the 210-foot central spire on the east side of the temple.

An iconic symbol of the faith, Moroni stands atop most of the Mormon church's 134 temples worldwide.

The church teaches that Moroni was an ancient prophet who led Mormonism's founder, Joseph Smith, to the golden plates from which the Book of Mormon was translated. Moroni's horn, the church says, symbolizes spreading the message of the restoration of Christianity that Mormons believe was begun by Smith.

The quake was centered about 10 miles west of Salt Lake City, near the city of Magna, starting at 7:09 a.m. MT, the US Geological Survey said. It's the state's most powerful quake since 1992, Utah's Division of Emergency Management said.