Uvalde mass shooter was not confronted by police before he entered the school, Texas official says 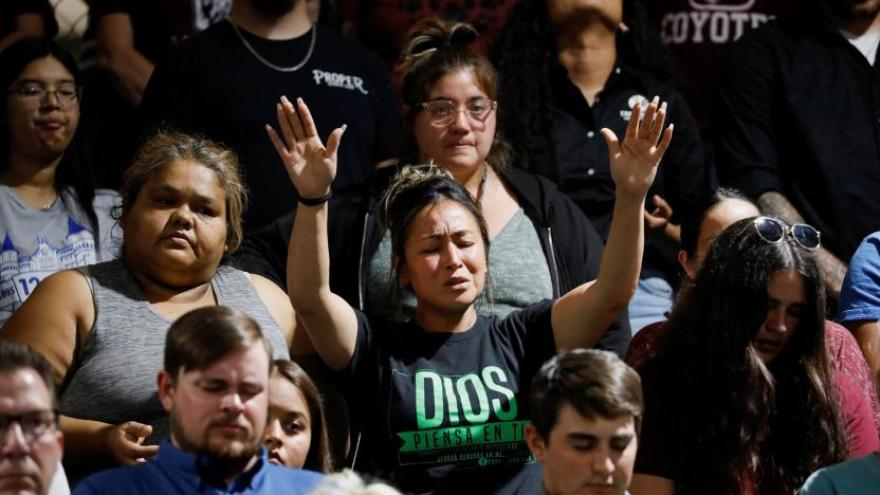 Police officers walk past a makeshift memorial for the shooting victims at Robb Elementary School in Uvalde, Texas, on Thursday.

(CNN) -- The 18-year-old gunman who killed 21 people at an elementary school in Uvalde, Texas, was not confronted by police before he entered the school, a Texas law enforcement official said Thursday, contradicting earlier comments from authorities and raising further questions about the police response to the massacre.

"He walked in unobstructed initially," Texas Department of Public Safety (DPS) Regional Director Victor Escalon said. "So from the grandmother's house, to the (ditch), to the school, into the school, he was not confronted by anybody."

A DPS representative on Wednesday said a school resource officer had "engaged" with the suspect before he went in the school.

Escalon's comments came in a news conference that added further confusion to the timeline of Tuesday's horrific shooting that left 19 children and two teachers dead. The massacre marked the deadliest US school shooting in nearly a decade and was at least the 30th school shooting at a K-12 school in 2022. And it has thrown the nation -- where active shooter attacks jumped more than 50% last year -- yet again into a fury of anger and grief amid renewed calls for gun laws reform.

In his comments, Escalon said that the suspect, Salvador Ramos, shot his grandmother and then wrecked his truck in a ditch outside the school at 11:28 a.m. He exited the truck with a rifle and shot at two people across the street, Escalon said. He then approached the school and shot at the building multiple times and walked in through an apparently unlocked door at 11:40 a.m., according to Escalon.

That door is normally locked, "unless you are leaving to go home on the school bus," former principal Ross McGlothlin told CNN's Newsroom on Thursday.

There was no school resource officer on site or available at the time, he said. Inside, the suspect walked into a classroom and fired more than 25 times, Escalon said. The majority of the gunfire was in the beginning of the attack, he said.

Officers arrived at the school at 11:44 a.m., but when they went to confront the gunman, they received fire and took cover, Escalon said. Three law enforcement officers went in the same door the shooter used to enter the school and four went through another school entrance, DPS spokesperson Chris Olivarez told CNN's Wolf Blitzer.

Officers called for more resources and personnel, evacuated students and teachers in other parts of the school, and at some point entered "negotiations" with the suspect, Escalon said. After about an hour, a US Border Patrol tactical team came to the classroom, forced entry and fatally shot the suspect, he said.

"At that point, they had the suspect contained inside the classroom," he told CNN. "If those officers weren't there, if they did not maintain their presence, there is a good chance that gunman could have made it to other classrooms and commit more killings."

The news conference underscored the confusion and disorganization of the police response and failed to answer questions as to how the gunman was able to remain inside the classroom for such a long time.

Uvalde Police Chief Daniel Rodriguez issued a statement Thursday defending his officers' response to the shooting. Two responding officers were shot by the suspect but are expected to survive.

"It is important for our community to know that our officers responded within minutes" alongside school resource officers, he said.

Olivarez said Thursday morning the suspect had barricaded himself in the classroom, which was attached to an adjoining room. All of the 21 killed and 17 injured were inside those classrooms, officials have said.

Since the Columbine school shooting of 1999, emergency responder protocol in such situations is to end the threat as quickly as possible because fatalities occur in seconds to minutes.

"It's almost incomprehensible for me to come up with a rational explanation as to why you would wait 30 minutes to an hour to get in there," Andrew McCabe, CNN senior law enforcement analyst, said before the news conference. "The door breaching, if it's just a locked door, that doesn't take 30 minutes to get into."

What happened outside the school

US Border Patrol Chief Raul Ortiz said about 80 to 100 agents responded to the shooting.

"They didn't hesitate. They came up with a plan. They entered that classroom and they took care of the situation as quickly as they possibly could," Ortiz said.

The lengthy response time, as well as a lack of communication to the public, created a chaotic situation outside the school as parents arrived, desperate to know if their kids were still alive. One father said he asked a law enforcement officer for gear.

"I told one of the officers myself, if they didn't want to go in there, let me borrow his gun and a vest and I'll go in there myself to handle it, and they told me no," the father told CNN's Jason Carroll. His son survived.

What happened inside the classrooms

Victims' family members and first responders offered first descriptions of some of the horrors inside the classrooms.

Angel Garza, a first responder and father of 10-year-old Amerie Jo Garza, arrived at the school Tuesday and gave medical aid to a girl covered head-to-toe in blood. The girl said she'd seen her best friend killed -- and the best friend's name was Amerie.

"How are you going to look at this girl and shoot her?" Garza told CNN on Wednesday. "My baby, how do you shoot my baby?"

Amerie had just gotten a cell phone two weeks ago for her 10th birthday, he said. He learned from two other students that Amerie had tried to call 911 during the shooting.

"She just died trying to save her classmates," Garza said. "She just wanted to save everyone."

Chief Jason Owens, who heads the Del Rio sector for Border Patrol, told CNN that the uniforms of the agents who responded to the scene were "covered in blood."

"I took my agents back to the Uvalde station. I had to bring new uniforms for them to change into," he said.

School district spent over $450,000 on security

The Uvalde school district had a safety plan that included its own police force, social media monitoring and a threat reporting system to "provide a safe and secure environment" for students.

The two-page document on the Uvalde Consolidated Independent School District website lists 21 different measures it says it has undertaken for the safety of the school community, ranging from an app for reporting bullying to physical security measures like fencing and a buzz-in door system. It's not clear to what degree the plan was developed with active shooters in mind.

The district employed four police officers, including a chief, detective, and two officers. The district also had additional security staff "who patrol door entrances, parking lots and perimeters of the campuses."

The plan included a "threat reporting system" for "students, parents, staff, and community members" to share information that is deemed "troubling," which could include information "about weapons, threats, fights, drugs, self-harm, suicide or disclosures made that are concerning." The policy states reports could be made through the district site or to a district staff member.

The security plan also refers to lockdown drills. "Students receive training on the Standard Response Protocol for lockout, lockdown, evacuate, shelter, and hold. In addition, drills are held for each of these emergency actions on a regular basis."

Two other schools, Uvalde High School and Anthon Elementary, have security vestibules, though it is not clear whether Robb had one.

Families identify loved ones they lost

The two teachers who were killed, Eva Mireles and Irma Garcia, had co-taught together for five years.

Garcia, a wife and mother to four children, was "sweet, kind, loving," according to a GoFundMe campaign set up to raise funds for funeral expenses and family needs. "She sacrificed herself protecting the kids in her classroom. She was a hero. She was loved by many and will truly be missed," the campaign said.

Mireles had been teaching for 17 years and "was a vivacious soul" who "spread laughter and joy everywhere she went," relative Amber Ybarra told CNN.

"She made you feel like she was only teaching your child," said Erica Torres, whose son Stanley was in her third and fourth grade classes. "Like, there's no other students but him. She made you feel so good."

José Flores Jr., 10, was also killed in the shooting, his father José Flores Sr. told CNN. He was his mother's "little shadow," she said. José Jr. was bursting with energy and loved to play baseball and video games, his father said.

Lexi Rubio, 10, had made the All-A honor roll and gotten a good citizen award just hours before she was shot and killed, her parents Felix and Kimberly Rubio told CNN.

"We told her we loved her and would pick her up after school. We had no idea this was goodbye," Kimberly Rubio wrote in a post on Facebook.

Nine-year-old Eliana "Ellie" Garcia, was among those killed, family members confirmed to CNN affiliate KHOU. She loved the movie "Encanto," cheerleading and basketball and dreamed of becoming a teacher, her grandparents, Rogelio Lugo and Nelda Lugo, told the LA Times.

Third-grader Annabell Guadalupe Rodriguez, 10, and her cousin died Tuesday, her family members confirmed to CNN affiliate KHOU. The cousin's name has not been released.

Shooter was a loner who bought two rifles a week earlier

The gunman, Ramos, was a local high school dropout with no criminal history and no known mental health history, officials said. He had just turned 18 and legally bought two AR-15-style rifles and ammunition for his birthday. Those who knew him described him as a loner with few, if any, friends, who was often in fights.

Before he began his rampage, Ramos allegedly messaged a girl who lives in Germany about his intentions.

He complained his grandmother was "on the phone with AT&T abojt (sic) my phone," according to screenshots reviewed by CNN and an interview with the 15-year-old girl, whose mother gave permission for her to be interviewed.

"It's annoying," he texted her.

The shooter shot his 66-year-old grandmother in the face before driving to Robb Elementary, where he crashed his car in a nearby ditch, authorities say. The grandmother was in serious condition as of Wednesday, officials said.

The gunman's maternal grandfather told CNN he knows many of the families affected by the massacre.

"Some of them are my friends, and I'm going to have to face them some day," Rolando Reyes said in Spanish.

He said his wife "did everything for (the shooter)," including cooking for him and picking him up from late work shifts at a fast food restaurant, and he does not understand why the 18-year-old would lash out at her.

Reyes said a bullet pierced his wife's jaw and upper cheek and she will need significant reconstructive surgery. She is at a hospital in San Antonio.