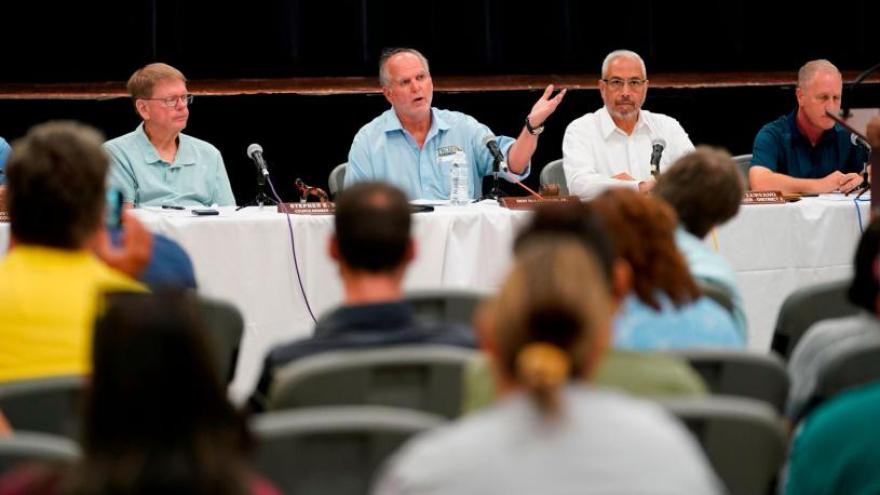 (CNN) -- Surveillance video of law enforcement's response during the Uvalde school massacre gives the clearest account yet of how officers waited outside an elementary classroom as the gunman continued firing, killing 21 students and teachers on May 24.

The video -- published by the Austin American-Statesman newspaper Tuesday, in a decision that enraged families of the victims who had yet to see the footage themselves -- shows responding officers approaching the door of the classroom within minutes of the shooter entering, yet retreating after the gunman opened fire at them.

After more than an hour -- with the hallway growing more crowded with officers from different agencies -- the doorway of the classroom was breached by law enforcement and the gunman shot and killed.

The release of the footage was particularly painful for the victims' families, including a group of parents and relatives who said they were blindsided Tuesday while in Washington, DC, to speak with elected officials. They expected to see the footage Sunday, when the Texas House Committee investigating the shooting planned to show it to the families before releasing it to the public.

"We get blindsided by a leak," said Angel Garza, whose 10-year-old daughter, Amerie Jo, was killed. "Who do you think you are to release footage like that of our children who can't even speak for themselves, but you want to go ahead and air their final moments to the entire world? What makes you think that's OK?"

The video, lightly edited by the American-Statesman to blur at least one child's identity and to remove the sound of children screaming, still leaves some questions unanswered -- in particular, why the law enforcement response was so delayed.

"They just didn't act. They just didn't move," Uvalde County Commissioner Ronald Garza said on CNN's "New Day" on Wednesday. "I just don't know what was going through those policemen's minds that tragic day, but ... there was just no action on their part."

The video also does not answer the question of "who, if anybody, was in charge," state Sen. Roland Gutierrez (D) told CNN on Tuesday.

"Even if we see 77 minutes in a hallway, it's not going to tell us who was in charge or who should have been in charge. And I think that's the sad statement of what happened on May 24 ... that no one was in charge."

Gutierrez criticized the Texas Department of Public Safety for having a multitude of officers on site yet not taking control of the situation. The state agency has consistently pointed to Pedro "Pete" Arredondo, the Uvalde school district police chief, as the on-scene commander during the attack.

Arredondo was placed on leave as school district police chief in June and has not given substantial public statements about his decision-making that day despite intense public scrutiny, though he told the Texas Tribune that he did not consider himself to be the leader on the scene. On Tuesday, the Uvalde City Council accepted his resignation from his position as councilman.

Regardless of who was in charge, each officer had a duty to act, North Richland Hills Police Department Chief Jimmy Perdue told CNN on Wednesday. Perdue is president of the Texas Police Chief's Association.

"I believe that the training is very clear on what we are supposed to do," Perdue said. "Even a single officer has the responsibility to go stop the killing. And that did not happen."

Police waited over an hour to confront gunman, video shows

In the first edited video, which is a little over four minutes long, audio captures frantic teachers screaming as the gunman crosses the parking lot after crashing his truck just outside Robb Elementary School's campus.

He then enters the school at 11:33 a.m., turns down a hallway carrying a semi-automatic rifle, walks into a classroom and opens fire. As the shots ring out, a student who had been peeking around the hallway corner at the gunman quickly turns and runs away.

Minutes later, officers rush into the hallway and approach the door, but immediately retreat to the end of the hall when the shooter appears to open fire at them at 11:37 a.m. Law enforcement continues to arrive in the crowded hallway but do not approach the door again until 12:21 p.m. and wait until 12:50 p.m. to breach the classroom and kill the gunman.

A second edited video, lasting almost an hour-and-a-half, was also published on the newspaper's YouTube channel.

In the footage, the sound of children screaming has been edited out, but the stark sounds of gunfire are still clearly audible and the gunman's face is briefly shown as he comes through the school doors.

Perdue could not explain the delayed response, saying only that "human frailties kicked in."

Holding back in this case, he said, "was not the right decision and the one that I'm sure they regret as well, and one that we're going to have to assess as a profession."

Officer seen on phone was speaking to his dying wife, official says

One of the officers in the video was seen checking his phone during the standoff, which prompted criticism Wednesday.

But state Rep. Joe Moody, one of three House Investigative Committee members looking into the law enforcement response to the massacre, tweeted context: The officer is Uvalde School District Police officer Ruben Ruiz, the husband of teacher Eva Mireles, who was killed.

Moody said Mireles contacted her husband on the phone while he was on the scene to say she had been shot and was dying.

"I'd not planned to speak publicly until the report was released, but I couldn't say nothing seeing this man, who's lost everything, maligned as if he was indifferent or actively malicious. Context matters," Moody tweeted Wednesday.

Mireles was a fourth grade teacher at the school, family members told CNN. She'd been an educator for 17 years. Seconds after being seen on the phone, the video shows Ruiz walking out of the camera's view. He returns moments later and speaks with other officers.

Ruiz was ultimately removed from the building and disarmed after trying to intervene, Moody explained in his tweet.

"To those who haven't bothered to read even the news that's been reported in your rush to judgment, he attempted to engage but was removed from the building and disarmed. We'll have much to say about the police response, but no criticism of this officer," Moody said.

That attempt to engage and Ruiz's removal are not visible on the surveillance published by the Austin American-Statesman.

The Austin American-Statesman's decision -- along with TV partner KVUE -- to release the footage was harshly criticized by local officials who echoed the concerns of parents, saying certain graphic audio and images should not have been included.

The American-Statesman defended its decision to publish, with executive editor Manny Garcia writing in an editorial, "We have to bear witness to history, and transparency and unrelenting reporting is a way to bring change."

Local officials have also been critical of the release of the footage, including Uvalde Mayor Don McLaughlin, who said, "There's no reason for the families to see that."

"I mean, they were going to see the video, but they didn't need to see the gunman coming in and hear the gunshots," McLaughlin said. They don't need to relive that, they've been through enough."

McLaughlin also shared his disappointment that a person close to the investigation would leak the video, calling it "very unprofessional" during a City Council meeting Tuesday.

"While I am glad that a small portion is now available for the public, I do believe watching the entire segment of law enforcement's response, or lack thereof, is also important," the chairman of the state House Investigative Committee, state Rep. Dustin Burrows (R) tweeted.

"I am also disappointed the victim's families and the Uvalde community's requests to watch the video first, and not have certain images and audio of the violence, were not achieved," he wrote.

What will happen next

Despite the leak of the surveillance footage, the Texas House Investigative Committee still plans to meet with victims' families on Sunday and provide them with a fact-finding report as originally scheduled, a source close to the committee told CNN.

The report will show that there was not one individual failure on May 24, but instead a group failure of great proportions, the source said. Members of the committee also asked the director of Texas DPS, Col. Steve McCraw, to testify a second time on Monday to get further clarification on earlier sworn testimony before the Texas House and Senate, according to the source.

Meanwhile, some outraged family members took to social media to urge people not to share the video while families come to terms with the footage and the law enforcement behavior it reveals. "PLEASE PLEASE PLEASE DO NOT SHARE THE VIDEO!! We need time to process this!!," posted Berlinda Arreola, grandmother of Amerie Jo Garza.

Gloria Cazares, whose daughter Jacklyn was killed, also implored her Facebook family and friends not to share the video, saying it is "the opposite of what the families wanted!"

"If you are a true friend please do not share it, I don't want to see it in my feed nor do I want to be tagged on any of the news stations that are sharing it. Our hearts are shattered all over again!" Cazares wrote.

Adrian Alonzo, the uncle of victim Ellie Garcia, told CNN's Dana Bash there have been no updates from officials about the investigation into law enforcement's response to the shooting. He said he read some news outlets had access to the video but were going to wait to release it publicly until family members saw it first.

"To go behind our backs and to release it for whatever reason, for views, for likes, for shares -- I don't know -- but for whatever reason that decision was made to put it out to the world before we even had a chance to see it," Alonzo said. "Watching the video and watching him enter the school with the rifle. It brought up a lot of anger."

The Uvalde school district has scheduled a meeting on July 18 where McLaughlin said he hopes the City Council and victims' families will be able to get details about the return to school.

The school district previously announced that Robb Elementary School students will not return to the campus and will be reassigned to other schools. On Wednesday, Uvalde Superintendent Hal Harrell announced a number of safety and security updates for all district properties and a realignment of Robb Elementary students to other campuses for the upcoming 2022-2023 school year.

The Texas Education Agency (TEA) and the Texas School Safety Center (TxSSC) have provided the district with initial recommendations for enhancing the safety and security infrastructure of its properties, Harrell said. The district is acting on those recommendations with $1 million in funding donated by the Las Vegas Raiders, the statement read.