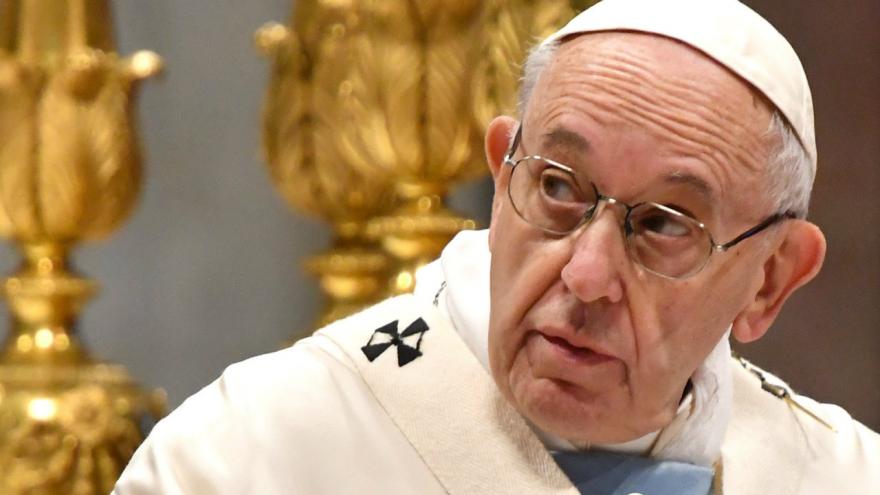 (CNN) -- For the first time in Catholic history, nearly 200 church leaders from around the world will gather at the Vatican starting Thursday to confront the scourge of clergy who sexually abuse children.

"We must look this monster in the face without fear if we really want to conquer it," said Alessandro Gisotti, a Vatican spokesman.

But as nearly every day brings new revelations about secrets and scandals at the heart of the Catholic Church, it seems as if the monster confronting the church only grows larger.

• Earlier this month, the Pope for the first time called the sexual abuse of nuns by Catholic clergy a "problem," even saying that some women had been sexually enslaved by religious men.

• The Vatican's ambassador to France is under investigation for sexual assault.

• A new salacious book to be published Thursday calls the Vatican "one of the biggest gay communities in the world," in which clergy regularly break their vows of celibacy.

• The Pope defrocked a prominent American former cardinal on Saturday but left questions unanswered about how Theodore McCarrick rose to the top echelon of the church despite persistent rumors about his sexual misconduct.

• The Vatican on Tuesday acknowledged for the first time a secret document with guidelines for priests who father children.

While organizers say the meeting this week in Rome will be focused solely on the abuse of children, pressure is building on church leaders to be more transparent about their moral failings and more accountable to people in the pews.

Each day of the meeting will center on a theme: responsibility on Thursday; accountability on Friday; and transparency on Saturday. On Sunday, more than 100 bishops from around the world, as well as other Catholic leaders, will gather for Mass in Sala Regia, an ornate hall in the Vatican's Apostolic Palace.

Pope Francis has sought to deflate expectations for the meeting, officially called, "Protection of Minors in the Church." The goal, he said, is to hear abuse survivors speak about their experiences, to teach bishops about the church's procedures to deal with abusive clergy and to seek forgiveness.

In his Angelus address on Sunday, Francis asked Catholics to pray for the meeting, an event that he said he wants "to be a powerful gesture of pastoral responsibility in the face of an urgent challenge of our time."

Other prominent Catholics also have described the summit in urgent terms, saying the church's credibility is on the line.

"My hope will be that people see this as a turning point," Cardinal Blase Cupich of Chicago, a member of the organizing committee, said Monday at a news conference. "This is not the endgame. No one can say there will be no more abuse in the church or the world, but people will be held accountable."

But questions remain about the summit's goal and the Pope's plans. Here are three of the most pressing questions.

"Two things can be true at once," said John Carr, an expert on contemporary Catholicism at Georgetown University in Washington. "One is: How could it have taken the church this long to have a meeting like this? The other is: Thank God it's finally happening now."

Catholics often date the beginning of the sexual abuse scandal to the stories about pedophile priests that emerged after a Boston Globe investigative series in 2002. Others point to revelations in 1984 that a Louisiana priest had sexually abused dozens of children.

But the church has known it had a problem with clergy abusing children for more than 1,700 years, argues British scholar Patrick Nash in a paper recently published in the Oxford Journal of Law and Religion.

As Nash notes, a church council in 309 threatened "bishops, presbyters (priests) and deacons ... who sexually abuse boys" with excommunication. A papal decree in 1658 pledged not only to remove abusive priests from office but also to report them to secular courts.

So, why does the church still have a problem with clergy abusing children?

First, the Catholic Church, like other large institutions, has occasionally put its own interests above those of individual members. Around the world, cultures of abuse have flourished at public universities, in media companies and even in nongovernmental organizations, like the United Nations' peacekeepers.

Like secular institutions, only outside pressure from legal authorities or journalists forces those institutions to seek to end their scandals by becoming more transparent and accountable.

But the Catholic Church also has specific policies and attitudes that have exacerbated its clergy abuse problem, Nash argues. For one, its hierarchical structure, in which the people at the top are considered God's agents on earth, promotes a culture of obedience and even subservience to bishops and the Pope.

Secondly, the church's body of law, called canon law, has historically prioritized the good of the church at large, rather than individual victims. Mercy and forgiveness are often extended to the abuser, while justice and accountability are given less priority. The canonical system, Nash argues, "is almost entirely weighted in favor of the accused."

That can be especially true in the case ofbishops disciplining their priests. When a bishop ordains a priest, he becomes in a sense his spiritual father. He takes a sacred oath to be responsible for the priest's welfare.

This relationship can set up a clear conflict of interest when a priest is accused of abuse, Nash argues, though bishops in the United States and some other nations have sought to solve the problem by handing over accusations to an independent review board.

"The theological link between a bishop and his priests, and the role of the bishop as a pastor rather than as a judge, can make this more difficult to confront," said the Rev. Hans Zollner, a German Jesuit and expert on child sex abuse who is helping to organize this week's meeting in Rome.

Another big issue is clericalism, the idea that priests are put on a pedestal and don't necessarily need to listen to lay Catholics, said Marie Collins, a former member of the Pontifical Commission for the Protection of Minors.

Collins quit the commission in 2017 after its reform efforts were thwarted by the Vatican's bureaucracy, the Roman Curia, she said.

"There is so much politics at the Vatican," Collins said in an interview last week, "so much clericalism and detachment from the real world. Their feeling is that they've been around for 2,000 years and deal with things in their own time."

Collins said that, during her three years on the commission, no real reforms were enacted, leading her to quit in frustration.

"They just do not grasp the gravity and widespread damage this is doing to thousands of children around the world."

The Pope is scheduled to give two speeches during the meeting this week in Rome, one at the beginning and one at the conclusion.

The first speech is expected to be short and lay out the agenda. The second, on Sunday, is expected to have a more programmatic element, in which he lays out exactly what he expects the bishops to do when they get home.

"This meeting is not just about nice words and a change of cultures," said Zollner. "We also need something that clarifies what happens to a bishop if he doesn't comply with canon law and enforce it."

Arguably, the Pope has already done that.

Though it wasn't widely noted at the time, Francis in 2016 issued an edict, called a "motu proprio," in which he said that any bishop "can be legitimately removed from office" for failing to protect children and other "vulnerable adults."

Since taking office in 2015, Francis has removed at least three American bishops after accusations emerged that they failed to deal appropriately with cases of clergy sexual misconduct. He has done the same with five bishops from Chile, including some that he defrocked, said Zollner.

So, there is a sense among some Catholics that what the church needs is not new rules but a culture that prioritizes survivors and lets bishop know that they will be fired if they foul up.

In other words, some experts say, the church doesn't have a legal crisis, it has a leadership crisis.

Part of the problem, Collins said, is that Francis has allowed bishops who have fouled up to resign quietly, with just a brief statement from the Vatican announcing the resignation. Often, there is no reason given.

Collins said she told the Pope personally in 2018 during his visit to Ireland that this is a problem.

"I told him that you may have removed them, but they are allowed to resign and claim ill health or whatever and hold their heads up. They haven't had to take responsibility for their actions, they haven't been publicly disciplined. People no longer trust the church; you have to tell them what happened."

Collins said the Pope agreed, speaking for the first time in English during their meeting Ireland to say, "You are right."

For a Pope who loves dramatic gestures -- think: washing the feet of Muslim prisoners, embracing a disfigured man, personally escorting Syrian refugees to the Vatican -- a key moment in this week's meeting may be the penitential liturgy on Saturday night.

Abuse survivors are expected to attend the spiritual ceremony, and it's possible that the Pope will attempt to express his church's contrition in a gesture that will say more than any spoken apology.

Catholic leaders at this week's meeting will come from almost every part of the globe, with 36 from Africa, 24 from North and South America, 18 from Asia, 32 from Europe and four from Oceania, organizers say.

In addition to Roman Catholic bishops, there will be 14 leaders of Oriental Catholic churches, 22 superiors general of religious orders and 14 members of the Vatican's own bureaucracy, including the heads of 10 departments.

Getting them all to agree on anything would be a challenge on a good day, not to mention a four-day, pressure-packed conference on a topic as serious and divisive as clergy sexual abuse. -

"Local church leaders perceive the problem of abuse very differently," said Zollner, adding that a one-size-fits-all solution for the 3,000 bishops around the world would be unwieldy and perhaps ineffective, as well.

The US Catholic bishops, for example, first adopted abuse policies in 2002, while at least five countries in French-speaking Africa still don't have any. Church leaders say that's often because of war, extreme poverty and other environmental factors, like Christian persecution, not because they do not recognize the sexual abuse of children as a problem.

Meanwhile, many Americans Catholics say they are fed up with the church's slow response to the abuse scandals and want their bishops to push for further action.

At a meeting last November of the US Conference of Catholic Bishops, some bishops expressed annoyance that the Vatican squashed their proposals to adopt procedures for disciplining bishops.

A source close to the US bishops conference said its president, Cardinal Daniel DiNardo, is hoping to present for discussion during this week's meeting a process to hold American bishops accountable for misconduct or mishandling clergy abuse cases.

Cupich spoke on Monday of "closing loopholes" in canon law.

But Zollner said it's unclear how that would happen during the meeting in Rome.

"This is not a meeting to produce canonical provisions. It's not a meeting of canon lawyers. What we really need to do -- and this is a huge challenge for the whole church -- is to get countries on board who have not felt the need to engage wholeheartedly with this issue," he said.

In that way, church experts say, if the church hopes to contain its ever-growing scandals, it will have to start this week in Rome.