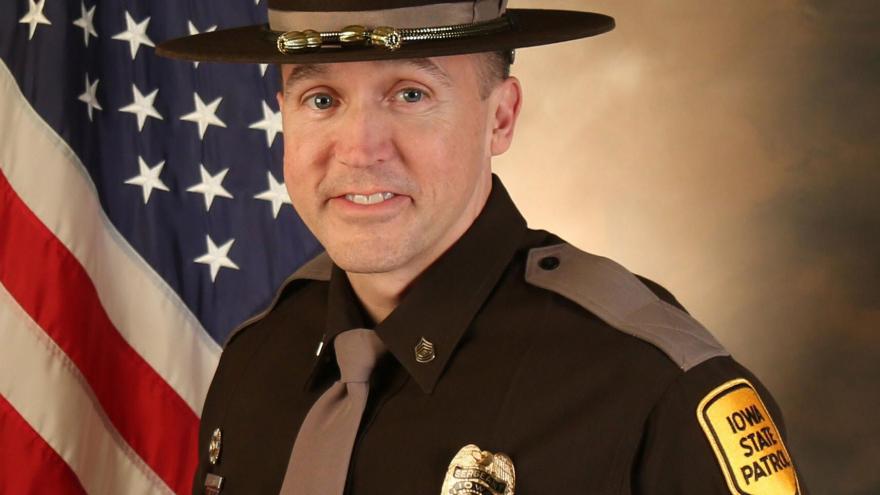 Sgt. Jim Smith, a 27-year-veteran of the Iowa State Patrol, was shot and killed in the line of duty Friday, officials said.

(CNN) -- A 27-year-veteran of the Iowa State Patrol was shot and killed by a man who had earlier assaulted a police officer, Iowa Department of Public Safety Commissioner Stephan Bayens said Saturday.

Sgt. Jim Smith died Friday while trying to enter the home where the man had barricaded himself in Grundy Center, Iowa, Bayens said. Grundy Center is about 80 miles northeast of Des Moines.

Mitch Mortvedt of the Iowa Division of Criminal Investigation identified the suspect as Michael Thomas Lang, 41, of Grundy Center.

Lang is being held on a $1 million cash bond and is charged with one count of murder in the first degree, according to an affidavit.

A Grundy Center Police officer attempted to pull over Lang, who is not allowed to drive, around 7:22 p.m. Friday, according to Mortvedt.

Lang got out of his vehicle and assaulted the officer, disarming him of his taser and radio before placing him in a chokehold, Mortvedt said during the news conference.

Another law enforcement officer came to the scene and told Lang to put his hands up, to which Lang responded, "Come get me," before getting back into his vehicle and fleeing to his home.

Multiple law enforcement agencies then went to the home, along with Lang's father, who told responding officers that his son had several firearms, Mortvedt said.

Smith was a part of an entry team which went into the home and was shot by Lang, according to Mortvedt.

The state trooper was taken to a hospital where he was pronounced dead from a single gunshot wound, Mortvedt said.

An Iowa State Patrol tactical team later entered the residence with an armored personnel carrier and was shot at multiple times by Lang, according to Mortvedt.

Three members of the tactical team returned fire and Lang was struck several times before being taken into custody, Mortvedt told reporters. He is in critical condition after undergoing surgery at a hospital, according to Mortvedt.

CNN has not been able to determine if Lang has legal representation.

"Smith was a guardian of justice,"Bayens says

Smith leaves behind a wife and two children, according to a statement Saturday from Iowa Gov. Kim Reynolds.

He is the second trooper to be shot and killed in the line of duty since 1936, a press release from the Iowa State Patrol said.

Reynolds will order flags in Iowa be flown at half-staff on the day of Smith's interment, the statement from her office said.

"It's with deep sorrow that we recognize the loss of Iowa State Patrol Sgt. Jim Smith, a courageous hero who died in the line of duty," Reynolds said in the statement. "Sgt. Jim Smith was a loving husband, father of two, and a pillar of the community. I along with the entire state of Iowa grieve for his family and friends as they try to cope with this devastating loss. Today we are once again reminded of the selfless sacrifices the brave men and women in uniform make. Let us never forget their bravery and that of their loved ones."

Bayens called Smith was a friend, brother, son, husband, dad and "protector of the innocent."

"We are hurting. We are angry. But rest assured we're not broken," the commissioner said. "We will continue to shoulder the burdens of our communities while carrying our own. We will continue to stand in the gap of good and evil because, like Jim, that is what we are called to do."

The Iowa State Patrol paid tribute to the fallen officer in a tweet Saturday. "Law enforcement officers pledge to serve the public and put their lives on the line daily. We collectively mourn the line of duty death of Sergeant Jim Smith on Friday April 9, 2021. Rest in Peace, Sergeant Smith...we have you 6 from here."