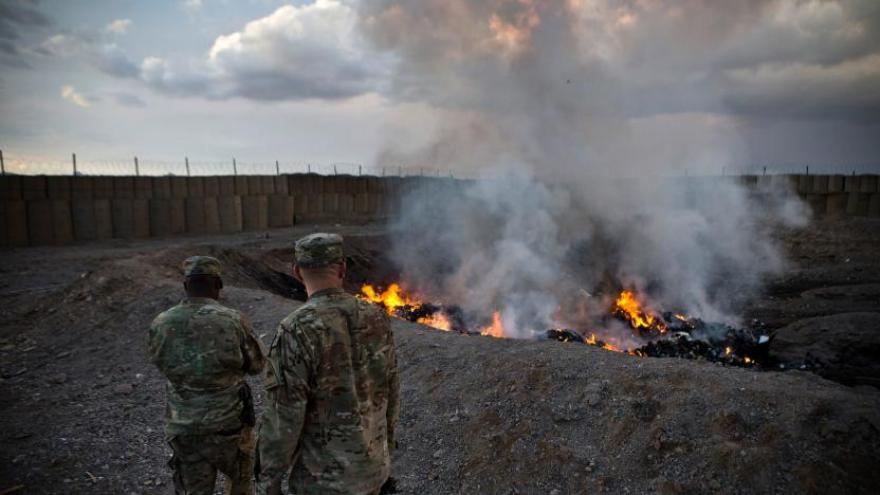 The Biden administration announced a series of new support options for veterans who had been exposed to "contaminants and environmental hazards," such as burn pits, while serving.

(CNN) -- The Biden administration on Veterans Day announced a series of new support options for veterans who had been exposed to "contaminants and environmental hazards," such as burn pits, while serving.

The steps, which the White House detailed in a fact sheet, seek to "improve our understanding of the health effects of military-related exposures, educate providers and veterans about these exposures, and provide timelier access to health services and benefits for individuals who were exposed."

Burn pits were used to incinerate all sorts of waste, hazardous material and chemical compounds at military sites throughout Iraq and Afghanistan. Eighty-six percent of post-9/11 veterans who served in Iraq or Afghanistan say they were exposed to burn pits, according to a 2020 survey by the nonprofit Iraq and Afghanistan Veterans of America.

While the Department of Veterans Affairs has previously said the issue is being studied and that those exposed "may be at greater risk for longer-term health conditions," the Biden administration's announcement Thursday brings a number of new support options to sick veterans.

They include the creation of "presumptions of exposure" in order to establish service connections for various chronic conditions and expanded disability benefits based on "presumed exposure to particulate matter." President Joe Biden has also directed the VA to complete a review of rare cancers and provide recommendations about new presumptions of service connections within 90 days, according to the fact sheet.

Other new efforts announced on Thursday include a push to improve data on individual exposures and raise awareness about veterans' eligibility for benefits.

"At the same time, the Administration will work with Congress on its encouraging ongoing efforts to ensure we are able to quickly and fairly recognize additional presumptions of service-connected disabilities, in order to live up to our sacred obligation to provide veterans the care they have earned," the White House said in the fact sheet.

The issue of burn pit exposure gained fresh attention last year when Jon Stewart, the former host of "The Daily Show," publicly advocated for a bill that would help sick veterans.

"Welcome to another exciting episode of 'When is America going to start acting like the great country we keep telling ourselves we are?'" a frustrated Stewart said at a news conference at the time. "Our veterans lived 24 hours a day, seven days a week, next to toxic smoke, dioxins -- everything."

But it had already been on the legislative radar of the past two presidents, including bills signed into law that expand the data on exposure.

In 2013, then-President Barack Obama signed the burn pit registry into law so that the VA could gather data on veterans' exposure to burn pits -- even if they weren't experiencing health issues at the time. High traffic plagued the launch of the registry and continually disrupted the early years of its service.

In 2019, then-President Donald Trump signed a law that, in part, will phase out burn pits and require the Department of Defense to pinpoint where they have been used, so that information can be cross-referenced with where sick veterans served.