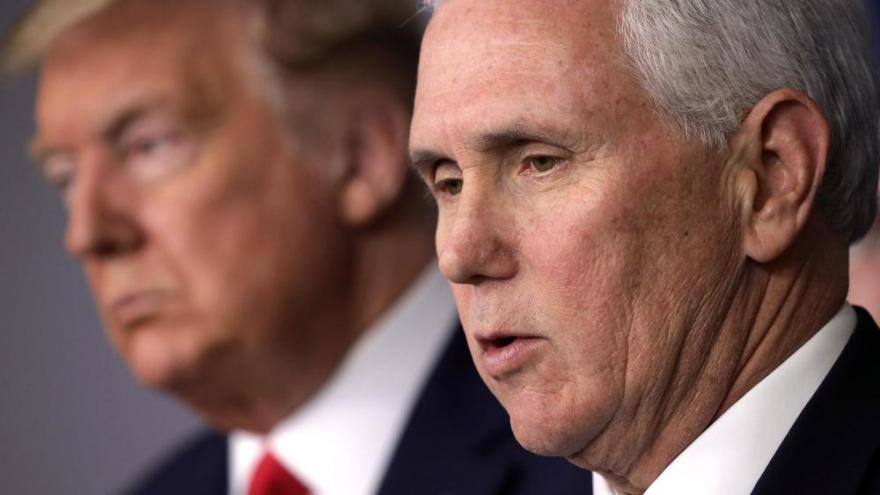 "Pleased to report that the COVID-19 test results came back negative for both Vice President @Mike_Pence and Second Lady @KarenPence," said Katie Miller, the press secretary for the vice president, via her Twitter account.

Pence had said he and his wife would be tested Saturday afternoon after a staff member of his office had tested positive for coronavirus.

"Given the unique position that I have as vice president and as the leader of the White House coronavirus task force, both I and my wife will be tested for the coronavirus later this afternoon," Pence said during a news conference at the White House.

His office announced Friday that one of its members tested positive for the coronavirus -- the closest confirmed case to Pence that is publicly known.

Pence told reporters Saturday that his staffer who tested positive for coronavirus is "doing well," had "mild" cold-like symptoms for a day and a half, and has not been at the White House since Monday.

He reiterated neither President Donald Trump nor himself had direct contact with the staff member, and said that health authorities have traced his contacts. Trump has already tested negative for the virus, the White House said last week.

Pence and Dr. Anthony Fauci, the director of the National Institute of Allergy and Infectious Diseases, stressed to Americans that they do not have to get tested if they are not displaying symptoms in order to preserve resources.

Pence also announced that more than 195,000 Americans have been tested for the virus as cases surpass 22,000 with about half confirmed in New York.

He noted that the number does not include county hospitals or health care labs around the country. Currently, only 19,343 tests have come back positive, Pence said.

Pence said that US Department of Health and Human Services "is completing a half billion dollar order of the (N95) masks."

The purchase is being coordinated through the Federal Emergency Management Agency, and the federal government is responding specifically to state requests, he said.

He said Apple would be donating 2 million industrial masks and working with the administration to distribute them. The company's CEO confirmed the donation later Saturday, saying Apple was sourcing supplies for health care providers in the US and Europe.

Pence also urged businesses to donate as many N95 masks as they could spare to local hospitals.

Fauci said that there are multiple avenues available for hospitals to acquire personal protective equipment through FEMA.

Pressed on a timeline, Fauci said the supplies would be delivered "sooner than weeks. It is going to be days, I would hope."

Trump also said that while he has signed the Defense Production Act, he has not used it to ramp up production of personal protective equipment because "we have so many companies making so many products."

"We have the act to use in case we need it," Trump said.

He mentioned Hanes as a company that is voluntarily manufacturing masks and claimed that Ford and General Motors have begun making ventilators.

"I had three calls yesterday directly, without having to institute like you will do this. These companies are making them right now," Trump said.

Asked by CNN why doctors and nurses don't have the medical equipment they need, Trump said that "many administrations preceded me and for the most part they did very little in terms of what you're talking about."

He went on to say, "We are making much of this stuff now, and it's being delivered now."

Trump also told reporters on Saturday that Congress is close to reaching a deal on a proposal for the next stimulus bill to deal with the pandemic.

"They're all negotiating, and everybody is working hard, and they want to get to a solution that's the right solution. I think we're getting very close," Trump said.

Trump said he's "strongly recommending a buyback exclusion" for companies in the legislation.

On Saturday, congressional and administration negotiators entered a crucial day in the effort to deploy more than $1 trillion in emergency stimulus to a staggering economy, with a growing consensus on a final agreement, but a handful of significant hang-ups still needed to be resolved.

Bipartisan groups of senators worked late into Friday night with top officials from Trump's administration to lock in a final agreement -- a deal that people directly involved in the negotiations tell CNN could top a cost of $1.5 trillion -- before falling short of a midnight deadline imposed by Senate Majority Leader Mitch McConnell.

Larry Kudlow, a top economic adviser to Trump, went even further on the overall scope of the package Saturday, telling reporters it could top $2 trillion.

This story has been updated with the results from the tests on the vice president and second lady.