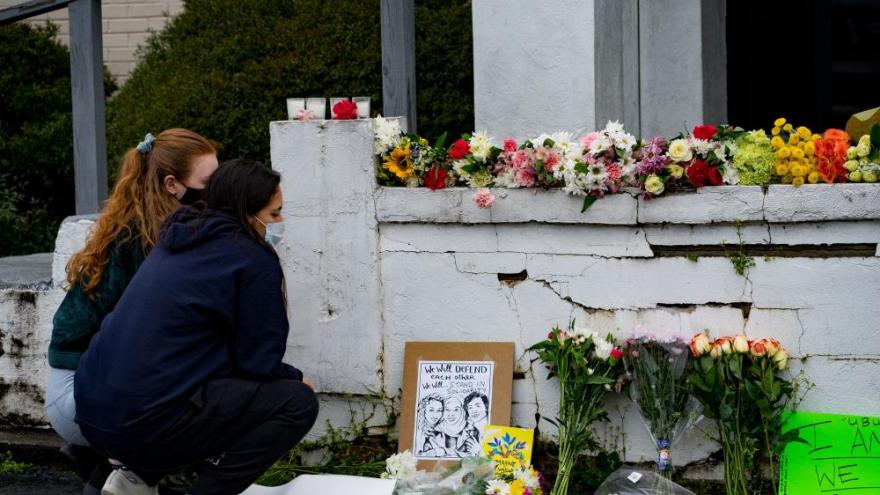 Robert Long, 21, was arrested in connection with the attacks 150 miles south of the city, and Atlanta Mayor Keisha Lance Bottoms said he was on his way to Florida to potentially take the lives of more victims.

"This one fact alone highlights the vulnerability, the invisibility, and the isolation of working-class Asian women in our country," Nguyen said at a Thursday news conference.

"When they go missing, or when they die, the loss of their lives will not incite the same kind of rage. And they won't even be treated with the same humanity," she said.

"And in this case, they've been characterized as a problem that needed to be eliminated."

Authorities have not yet confirmed a motive for the shootings at three Atlanta-area spas, which killed eight people -- including six Asian women. A suspect is in custody.

President Joe Biden ordered flags to be flown at half-staff Thursday to honor the victims. Biden also plans to visit Atlanta on Friday to meet with Mayor Keisha Lance Bottoms, as well as Asian American and Pacific Islander leaders, according to Georgia State Rep. Bee Nguyen.

Among the issues they will bring up is the concern that the shootings be "taken seriously" and seriously considered as a hate crime against Asians and not dismissed as the suspect having a "bad day," Nguyen said.

Across the US, Asian Americans are riddled with fear as unprovoked attacks against them intensify.

Anti-Asian hate crimes have more than doubled during the pandemic, according to the Center for the Study of Hate and Extremism at California State University, San Bernardino.

The violence has surged amid racist rhetoric during the coronavirus pandemic -- some popularized by ex-President Donald Trump. Many Asian Americans have been subjected to vitriol about the "China virus" or the "kung flu" -- even those who have never been to Asia.

Asian American communities are on edge after Tuesday's deadly shootings.

"I feel like that just took it to a whole other extreme," said Hanna Kim, a teacher from Novi, Michigan.

Nguyen said as a public official, whenever anyone disagrees with her opinion or policies, the first thing they do is criticize the country her parents came from and, second, her gender.

"I have experienced a lot of targeted misogyny, targeted xenophobia, messages of going back to your own country, even though I was born here, raised here, I've lived in Georgia almost my entire life. It is very real," Nguyen said.

Actress Lucy Liu told CNN's Erin Burnett on Thursday that she believes race relations will get worse before they can get better.

"I think culturally, we are not a people that speak out and talk about being victims and I think that's something that we learn" from previous generations, Liu said.

Bottoms told CNN that nowadays "there seems to be permission now to be hateful." She's spent the past days reaching out to members of the Asian community in Atlanta "to make sure we have all of the information we need to make sure that our communities are protected," adding the dialogue will continue.

"There seems to be a permission that I've not seen, at least in my lifetime," Bottoms said. "It does predate Donald Trump, but he certainly has given permission and done his part to elevate the hatred."

Kim, a 24-year-old Korean American, said she often feels like she has a target on her back. Last year, she said a parent wanted to remove one of her students from her second-grade class because Kim was Asian.

Yet despite outrage over the shootings, attacks against Asian Americans continue.

An Asian man and woman were assaulted Wednesday by the same suspect in separate attacks, San Francisco police said. Investigators are trying to determine whether bias was a motivating factor in the attack.

"While we're relieved the suspect was quickly apprehended, we're certainly not at peace as this attack still points to an escalating threat many in the Asian American community feel today," said Margaret Huang, president and CEO of Southern Poverty Law Center.

What we know about the victims

Elcias R. Hernandez-Ortiz, 30, of Acworth, was also shot at the spa but survived.

Three more victims were found dead at Gold Massage Spa in Atlanta, and another victim was found dead across the street at the Aroma Therapy Spa.

The names of those four victims have not yet been released by authorities.

Three of the victims were 52, 75 and 64 years of age, according to birth years listed in an Atlanta police incident report.

"We need to make sure we have a true verification of their identities and that we make the proper next of kin notification," Hampton said Thursday.

What we know about the suspect

Long, 21, faces eight counts of murder and one count of aggravated assault.

Long was on his way to Florida, possibly to take the lives of more victims, Atlanta Mayor Keisha Lance Bottoms said, citing investigators.

The suspect told police he believed he had a sex addiction and that he saw the spas as "a temptation ... that he wanted to eliminate," Cherokee County sheriff's Capt. Jay Baker said.

But Atlanta Police Chief Rodney Bryant said it is still too early to know a motive.

Capt. Jay Baker on Wednesday said Long "was pretty much fed up and had been kind of at the end of his rope. Yesterday was a really bad day for him, and this is what he did."

Sheriff Frank Reynolds said in a statement Thursday he has known and worked with Baker for many years and his comments "were not intended disrespect any of the victims, the gravity of this tragedy or express empathy or sympathy for the suspect."

Shortly before 5 p.m. Tuesday, deputies were called to Youngs Asian Massage between the Georgia cities of Woodstock and Acworth after reports of a shooting, Cherokee County sheriff's officials said.

About an hour later and 30 miles away, Atlanta police responded to the Gold Massage Spa on Piedmont Road in Atlanta. Police said they found three people dead.

The names of those four victims have not yet been released by authorities.

"(The family members) are very distraught, and they were very helpful in this apprehension," Reynolds said.

'It would be appropriate' if the suspect was charged with a hate crime, mayor says

Long has claimed responsibility for the shootings at the spas, the Cherokee County sheriff's office said.

A law enforcement source told CNN that Long was recently kicked out of the house by his family due to his sexual addiction, which, the source said, included frequently spending hours watching pornography online.

Bottoms, the Atlanta mayor, told CNN's Anderson Cooper on Thursday she thinks the shootings were a hate crime.

"It looked like a hate crime to me," she said. "This was targeted at Asian spas. Six of the women who were killed were Asian so it's difficult to see it as anything but that."

"Sex" is a hate crime category under Georgia's new law. If Long was targeting women out of hatred for them or scapegoating them for his own problems, it could potentially be a hate crime.

The shootings don't have to be racially motivated to constitute a hate crime in Georgia.

Cherokee County District Attorney Shannon Wallace released a statement Thursday saying "we are acutely aware of the feelings of terror being experienced in the Asian-American community."

"We hear your concerns and want it to be known that these victims will receive the very best efforts of this office," Wallace said. "We anticipate beginning to meet with the impacted families in the near future, and earn their trust, as we continue to develop our case against the defendant."

Correction: An earlier version of this story misspelled Xiaojie Tan's last name based on information provided by the Cherokee County Sheriff's Office. The story also gave incorrect dates for comments made by officials. It has been corrected.