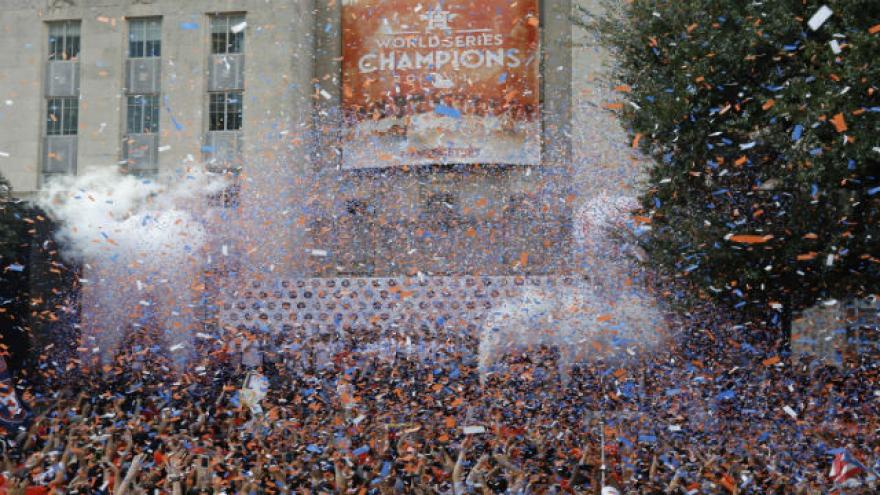 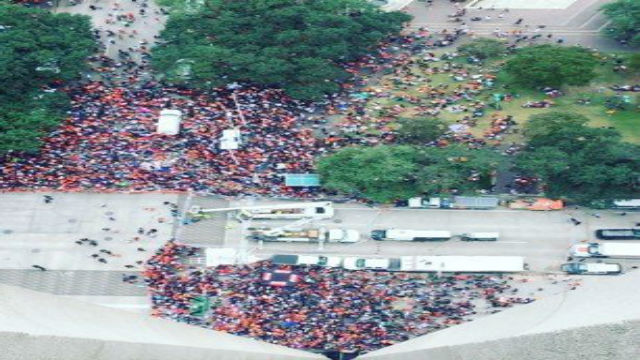 A huge crowd of Astros fans have jammed into downtown Houston to celebrate the team's World Series win. Alanna Reed shot this from her 25th floor office building about an hour before the parade started. Alanna Reed @ciaoalanna

(CNN) -- Two months ago, large swaths of Houston -- America's fourth most populous city -- were swamped by Hurricane Harvey, and people were forced from their homes.

The city's baseball team was forced to play a few home games in another state.

But the Astros returned as soon as they could, and they did something that seemed improbable just a few years ago -- they kept winning games until they won the final one of the season.

On Friday, the city hosted its first World Series victory parade, celebrating an Astros' run that has been an inspiring diversion for residents of Houston and surrounding areas. Thousands of Texans have been unable to return to their ruined houses and are still living with relatives or in motels.

After a brief stint in Florida at the end of August, the Astros played the rest of their home games in Minute Maid Park. With a "Houston Strong" patch on their uniforms, the Astros won 18 of 21 games before the home fans.

Two of those wins came in a dramatic and enthralling World Series, which Houston won by taking Game 7 in Los Angeles.

Tens of thousands of people poured into downtown Houston for the parade. They were warned about potential parking issues because many parking garages are still not available, CNN affiliate KTRK reported. Well, not available for cars. Many, many fans used them to look out over the parade.

"This is a great gift to Houston," she told KTRK. "We were feeling the pain of Hurricane Harvey, and so was the nation. I think the nation is celebrating Houston's recovery. ... (The Astros) have done an enormous job for our spirits."

The members of the newly crowned World Series champions rode atop fire trucks, waving to the big crowds as colored confetti fell upon them. Series star George Springer held up the World Series trophy, then handed it to newly engaged Carlos Correa. Josh Reddick wore a very oversized orange cowboy hat -- orange being one of the team's principal colors.

Even the team's spark plug, the notably very shy Jose Altuve, joined teammates on a truck.

Hall of Famers Jeff Bagwell and Craig Biggio, former Astros, rode on one of the trucks with other club veterans.

The parade ended at City Hall, where the mayor and members of the team thanked the fans at a victory rally.

One of the team's star pitchers said the 2.2 million city residents were part of the victory: "We weren't playing for you guys. We were all playing together. We won this World Series together," Dallas Keuchel said.