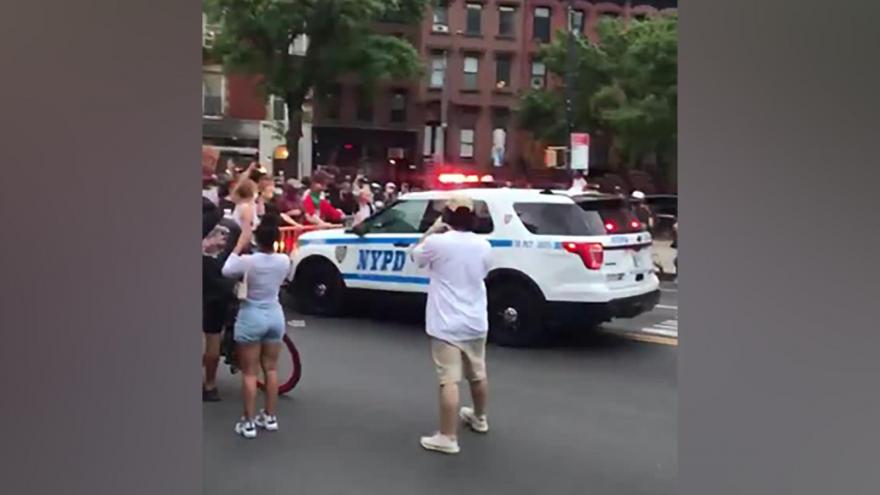 Police are investigating after a video appeared to show a New York City Police Department truck plowing through a crowd during Saturday's protests over the death of George Floyd.

(CNN) -- Police are investigating after a video appeared to show a New York City Police Department truck plowing through a crowd during Saturday's protests over the death of George Floyd.

The 27-second video, which was posted to Twitter, shows an NYPD truck in front of a crowd throwing objects at the vehicle. There is a barricade in front of the truck. The truck then appears to drive into the barricade, knocking over protestors.Screaming and yelling are heard while a person is seen jumping on top of the truck. It's unclear if there were any injuries.

The incident further fuels the flames of negative interactions between police and the people they're sworn to protect. A lot of the protests erupting in major cities across the US are the result of people's anger boiling over after the death of Floyd at the hands of police in Minneapolis.

Mayor Bill de Blasio said the incident is under investigation, but emphasized that the officers may have had no other choice.

"I'm not going to blame officers who were trying to deal with an absolutely impossible situation. The folks who were converging on that police car did the wrong thing to begin with, and they created an untenable situation," he said. "I wish the officers had found a different approach, but let's begin at the beginning. The protesters in that video did the wrong thing to surround that police car, period."

"As mayor, this police department is under your leadership," she tweeted Sunday morning.

"Defending and making excuses for NYPD running SUVs into crowds was wrong. Make it right. De-escalate."

The mayor emphasized late Saturday that he had spoken with community leaders and there is a possibility that there areprotesters who are intentionally trying to incite violence including those who have come to New York City from other places.

"People who represent the communities of our city and the residents of our city are not joining negative and violent protests," de Blasio said.

CNN has reached out to the NYPD, and the offices of the New York governor and attorney general for comment.

Earlier, Gov. Andrew Cuomo said he had ordered the attorney general to independently review the events of Friday's protests that included protesters clashing with police in Brooklyn and other boroughs.