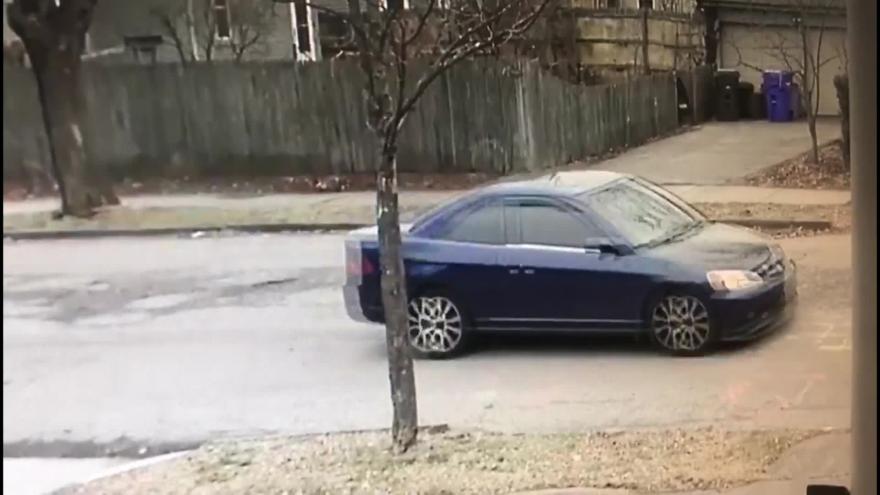 A video taken the day before an 11-year-old Massachusetts girl was abducted captured a suspicious car traveling the same street as the child, a recording released by the Springfield Police Department shows. Credit: Springfield Police By Rebekah Riess, CNN

(CNN) -- A video taken the day before an 11-year-old Massachusetts girl was abducted captured a suspicious car traveling the same street as the child, a recording released by the Springfield Police Department shows.

The girl was abducted Wednesday and later found safe after state police pulled over the car she was in, acting on a tip from a civilian. The blue Honda sedan seen in the video matched the description of the suspect vehicle.

State police said a man forced the girl into a car Wednesday while she was walking home from school about 1:30 p.m. A woman was driving the car when the incident happened, authorities said.

A home surveillance camera shows a blue car behind her as she walked down a street on Tuesday.

"The car was seen in the area yesterday also," Commissioner Cheryl Clapprood said Wednesday as police release the video.

After the girl was taken, authorities issued an Amber Alert with a description of the suspect car, and a person who was driving on the Massachusetts Turnpike spotted the vehicle Wednesday evening.

When the Massachusetts State Police pulled the car over, there was a man inside with the girl. She was taken to a hospital and had no apparent injuries, according to state police. Clapprood said the girl's condition looks to be "fair to good."

The man arrested, Miguel Rodriguez, 24, appears to have no connection to the girl, the commissioner said.

"I will tell you that I've been doing this for a while, and these types of situations are very few and far between where you actually have a stranger abduction of a small child," she said

The second person who was in the suspect car at the time of the abduction has not been found, police said.

It is unclear whether Rodriguez has an attorney.