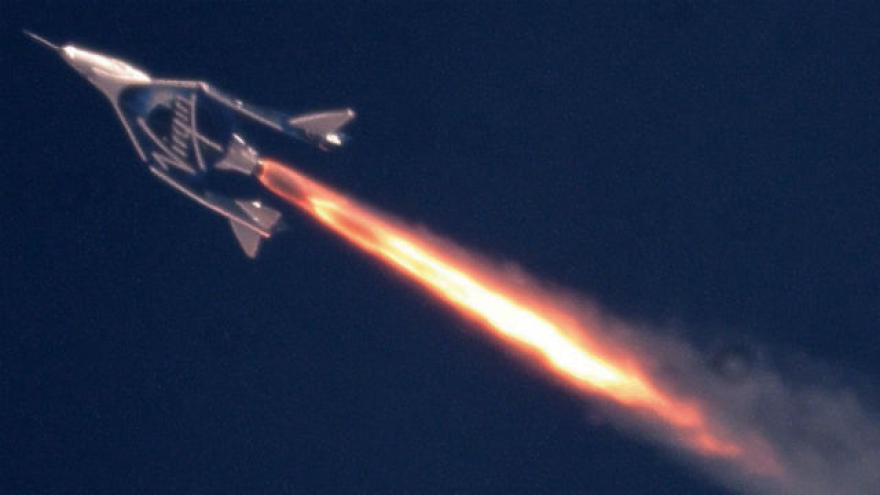 (CNN) -- Virgin Galactic's supersonic space plane soared into the upper reaches of Earth's atmosphere Thursday for a milestone test flight. It indicates the company is not far off from sending tourists to space.

The rocket-powered plane, VSS Unity, was flown by two veteran pilots to a maximum altitude of 51.4 miles, surpassing the 50-mile mark that the US government recognizes as the edge of space.

The test flight took off from the Mojave Air & Space Port in California at 7:11 am PT.

Just after 8:00 am PT, VSS Unity detached from the mothership and lit its rocket engine, swooping directly upward.

"We made it to space," Enrico Palermo, president of The Spaceship Company, Virgin Galactic's manufacturing partner, told a crowd of cheering spectators gathered at the Mojave Air & Space Port in Mojave, California.

A visibly emotional Richard Branson, Virgin Galactic's founder, told reporters after the flight that it meant "myself and thousands of other people like me" could soon see space for themselves.

"We saw our biggest dream and our toughest challenge to date fulfilled. How on Earth do I describe the feeling?" he said. "Today for the first time in history, a crewed spaceship built to carry private passengers reached space."

It was the fourth powered test flight for VSS Unity and the closest yet to mimicking the flight path that it is expected to one day take on commercial missions. Its success means the company could be just months away from taking up its first load of tourists, a goal Virgin Galactic has worked toward since it was founded in 2004.

Rather than aiming for space using a NASA-esque vertically launched rocket, Virgin Galactic uses a rocket-powered space plane dubbed VSS Unity, a craft more comparable to the supersonic X planes developed by the US military.

VSS Unity took off attached to its mothership, WhiteKnightTwo. Then, about 43,000 feet in the air, VSS Unity's pilots commanded the plane's release. After a few seconds of coasting, VSS Unity's rocket engine fired on. It burned for a total of 60 seconds and drove the vehicle directly upward at nearly three times the speed of sound.

VSS Unity's peak altitude of 51.4 miles is similar to what Virgin Galactic has planned for commercial flights. It's high enough to reach the US government's recognized definition of space, but not the 62-mile "Karman line" that is internationally recognized as the boundary.

But last month, the Fédération Aéronautique Internationale, which maintains world records for spaceflight, said it was considering adopting a 50-mile definition based on "compelling" scientific research that was recently published.

The two pilots aboard VSS Unity on Thursday will be awarded commercial astronaut wings from the US Federal Aviation Administration, which oversees commercial space travel.

One VSS Unity pilot, Rick "CJ" Sturckow, already has his wings: A former Marine, Sturckow was a NASA astronaut who flew on four Space Shuttle missions. It will be the first pair of wings awarded to VSS Unity's pilot in command, Mark "Forger" Stucky, a former Marine and test pilot for NASA and the US Air Force.

Stucky, beaming from an outdoor stage near the runway after returning from the test flight, said he'd been waiting for the moment "for decades."

In addition to the test pilots, a flight test dummy and four research payloads from NASA's Flight Opportunities Program were on board to help simulate the weight distribution of having passengers on board.

Bringing NASA on as a customer made Thursday's flight the first revenue-earning mission for Virgin Galactic.

Virgin Galactic has been hungry for cash since Richard Branson announced he would no longer accept a $1 billion investment from Saudi Arabia. Branson shunned the money after learning about the death of journalist Jamal Khashoggi at a Saudi consulate in October.

Branson told reporters Thursday that "by being successful today, we hope to bring in one or two other investors."

"Space is not cheap," he said. "I've personally invested about a billion dollars in this project, so having our first money coming back is a good feeling...We've got to make this a profitable venture, and I think we can make it a profitable venture."

Virgin Galactic has not said exactly when it plans to begin commercial flights. More tests are planned before the company will move operations down to New Mexico's Spaceport America and take up its first load of tourists. Branson plans to be the first passenger aboard VSS Unity.

He told CNN Business' Rachel Crane in a post-launch interview Thursday that he looks "forward to go up in maybe five, six months time."

The tragedy spurred critics of space tourism who have deemed such projects irresponsibly risky. But Virgin Galactic bounced back.

The company is squared up to compete directly with Blue Origin, the space company founded by Amazon billionaire Jeff Bezos in 2000 to offer suborbital tourism flights.

Both companies are still in the testing phase. And Blue Origin — which plans to fly tourists on an automated, vertically launched rocket — has yet to conduct a crewed flight or begin selling tickets.

Virgin Galactic says about 600 people have reserved tickets, priced between $200,000 and $250,000, to ride aboard its supersonic plane. Some have waited over a decade for their shot.

When asked about Virgin Galactic's competitors in a recent interview with CNN Business, Branson said it was not a "race."

"Safety's all that matters if you're putting people into space," he said.