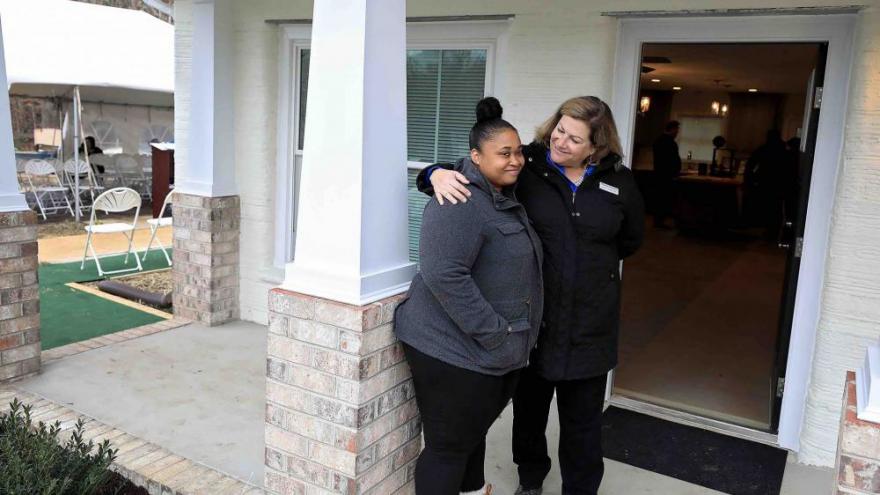 (CNN) -- One Virginia family received the keys to their new 3D-printed home in time for Christmas.

The home is Habitat for Humanity's first 3D-printed home in the nation, according to a Habitat news release.

The 1,200-square-foot home has three bedrooms, two full baths and was built from concrete.

The technology allowed the home to be built in just 12 hours, which saves about four weeks of construction time for a typical home.

April Stringfield purchased the home through the Habitat Homebuyer Program. She will move in with her 13-year-old son just in time for the holidays.

"My son and I are so thankful," Stringfield said in a live feed streamed on Habitat's Facebook page. "I always wanted to be a homeowner. It's like a dream come true."

To purchase the home, Stringfield logged hundreds of hours of sweat equity, Green told CNN, which is one of the requirements for homebuyers through the program.

"Every Habitat affiliate in the nation and worldwide sells home to partner families who have low to moderate incomes," Green said. "They must have and maintain good credit and be willing to partner with us."

"I'm excited to make new memories in Williamsburg and especially in a house, a home," Stringfield told CNN affiliate WTKR. "Some place I can call home and give my son that backyard that he can play in and also for my puppy to run around the yard."

The concrete used in the house's 3D construction has many long-term benefits, such as the ability to retain temperature and withstand natural disasters, like tornadoes and hurricanes.

Stringfield's home also includes a personal 3D printer that will allow her to reprint anything she may need, "everything from electrical outlet to trim to cabinet knobs," Green told CNN.

While this is the first 3D home for Habitat for Humanity in the US, it certainly won't be the last. Green told CNN it hopes to continue partnering and developing the technology used with the printing.

"We would love to build more with this technology, especially because it's got that long-term savings for the homeowners," Green said.