Volcano eruption appears to subside in the Democratic Republic of Congo 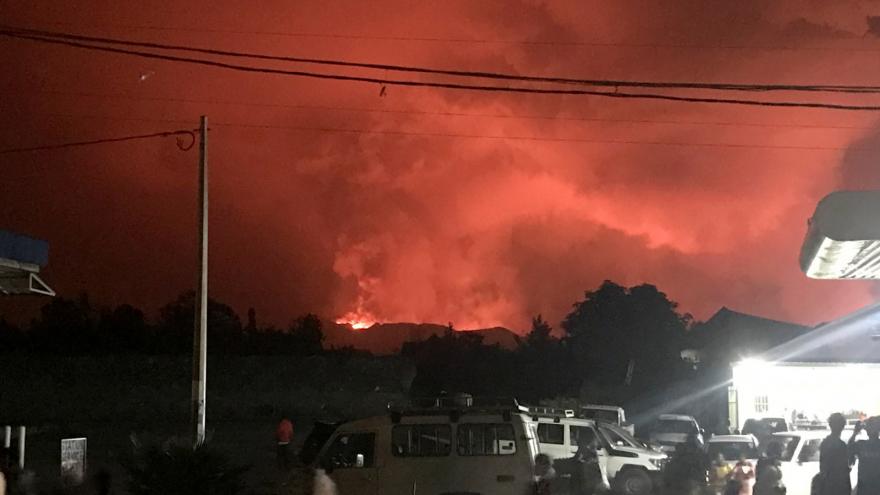 (CNN) -- The eruption of the Mount Nyiragongo volcano in the eastern Democratic Republic of Congo seems to have subsided late Saturday, according to the Goma Volcano Observatory, which monitors the volcano.

Still, authorities have activated an evacuation plan for the nearby city of Goma. The volcano's last major eruption in 2002 killed 250 people and displaced thousands.

Volcanologist Honore Chiraba from the Goma Volcano Observatory told CNN there are two fractures in the volcano. Chiraba is following the volcanic activity closely with the governor of North Kivu, the province where the city of Goma is located.

He said even though the volcanic activity seems to have subsided late Saturday, officials will evacuate Goma as a precaution.

"The lava is flowing but not very fast," Chiraba said. "At this stage we don't think anyone is injured but we can't know for sure."

Chiraba said that the country's the border with Rwanda is closed. A government source earlier told CNN Rwanda is monitoring the volcanic eruption and is forming a plan in case people start crossing the border into Rwanda following evacuations.

The current metro area population of Goma is 670,000, according to a projection by the UN.

Patrick Kakesa from the International NGO Safety Organisation (INSO) said in a statement at 11 p.m. the lava appears to be flowing towards the border with Rwanda.

"In the event of an evacuation, customs between Goma and Gisenyi are closed overnight," he said.

The NGO has advised humanitarian workers living in the Munigi camp a short distance from Northern Goma to move to villages further to the west.

A reconnaissance flight by a UN helicopter on Saturday appeared to show the lava was not flowing toward Goma or any major population centers, the UN peacekeeping mission known as MONUSCO said in a statement.

The eruption started around 6 p.m. on Saturday, according to INSO.

"As a precaution, INSO strongly advises humanitarian workers in the city to prepare for a possible evacuation," Kakesa said. "It is recommended that others wait at home for the situation to evolve. INSO continues to monitor the situation and updates will be sent by email."

A post on the verified Twitter account of the British Embassy in the Democratic Republic of Congo said Saturday, "Nyiragongo volcano, close to city of Goma, began erupting this evening. Current assessments indicate eruption doesn't threaten the city itself. All should remain vigilant & Brits concerned should reach out to us ... We continue to monitor the situation closely."

The 11,500-foot-high volcano is one of several near the DRC's border with Rwanda and Uganda, an area of tropical rain forest and rare mountain gorillas.

Goma is on the edge of Lake Kivu on the Democratic Republic of Congo's border with Rwanda.