Volcanoes could still be active on Mars 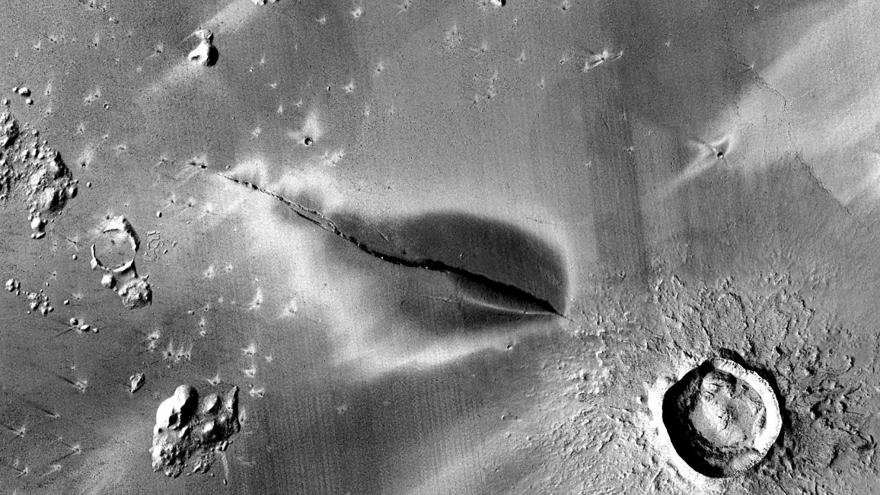 This image shows a recent explosive volcanic deposit around a fissure of the Cerberus Fossae system on Mars. - The Murray Lab/JPL/MSSS/NASA

(CNN) -- The barren landscape of Mars makes the planet seem like a quiet, frozen desert where nothing has happened for billions of years except for the occasional dust storm.

New research, however, suggests that the red planet has a more recent history of activity -- and it could still be volcanically active.

Scientists still are trying to understand the history of Mars, and NASA rovers like Curiosity and Perseverance can help uncover evidence to piece together the planet's time line.

Mars was once much wetter and warmer than it is today about 4 billion years ago. Something happened to cause the planet to lose its atmosphere and send its water beneath the surface about 3 billion years ago -- but the cause remains a mystery.

Scientists had believed much of the planet's volcanic activity occurred between 3 and 4 billion years ago, along with some isolated eruptions happening about 3 million years ago.

Now, orbiters circling Mars have provided imagery and data of a previously unknown area of interest. This latest information shows evidence of volcanic activity that happened within the last 50,000 years -- which is fairly young, astronomically speaking.

The smooth, dark area stretches for 8 miles. It's surrounded by a 20-mile-long volcanic fissure in the Cerberus Fossae system of faults where the Martian crust has pulled apart.

This intriguing feature is located in the Elysium Planitia region, a plain spread across the planet's equator and second largest volcanic region.

The study published Monday in the journal Icarus.

"This may be the youngest volcanic deposit yet documented on Mars," said lead study author David Horvath, a research scientist at the Planetary Science Institute, in a statement. "If we were to compress Mars' geologic history into a single day, this would have occurred in the very last second."

The researchers believe the evidence, including how the material was distributed on the surface, matches a pyroclastic eruption. This type of volcanic eruption occurs when magma explodes due to expanding gases.

In other words, think about what happens when you shake up a soda.

"When we first noticed this deposit, we knew it was something special," said study coauthor Jeff Andrews-Hanna, an associate professor at the University of Arizona Lunar and Planetary Laboratory, in a statement. "The deposit was unlike anything else found in the region, or indeed on all of Mars, and more closely resembled features created by older volcanic eruptions on the Moon and Mercury."

Most of the evidence of previous volcanic activity is similar to lava flows that we might see on Earth. But this one is different.

"This feature overlies the surrounding lava flows and appears to be a relatively fresh and thin deposit of ash and rock, representing a different style of eruption than previously identified pyroclastic features," Horvath said. "This eruption could have spewed ash as high as 6 miles into Mars' atmosphere. It is possible that these sorts of deposits were more common but have been eroded or buried."

The potential for life on Mars

While neither of the rovers are close enough to investigate this feature, NASA's InSight Lander is about 1,000 miles away. The stationary craft has been studying seismic activity on Mars since it landed in November 2018.

While tracking seismic activity, InSight detected two Marsquakes -- like earthquakes but not caused by tectonic plates since Mars doesn't have any -- that originated from the region around Cerberus Fossae.

Since tectonic activity isn't the cause, scientists think magma could be moving deep within the planet's interior to cause these quakes.

"The young age of this deposit absolutely raises the possibility that there could still be volcanic activity on Mars, and it is intriguing that recent Marsquakes detected by the InSight mission are sourced from the Cerberus Fossae," Horvath said.

Fissures in Cerberus Fossae likely occurred 20 million years ago when groundwater spewed up and onto the surface, although the cause for this eruption is unknown.

And these volcanic deposits could suggest something many scientists have speculated: Mars could have been habitable below the surface more recently than the surface itself.

"The interaction of ascending magma and the icy substrate of this region could have provided favorable conditions for microbial life fairly recently and raises the possibility of extant life in this region," Horvath said.

Eruptions could have occurred when Martian magma made contact with permafrost beneath the surface.

"The ice melts to water, mixes with the magma and vaporizes, forcing a violent explosion of the mixture," said study coauthor Pranabendu Moitra, a research scientist in the University of Arizona's department of geosciences, in a statement. "When water mixes with magma, it's like pouring gasoline on a fire."

Just 6 miles away from this volcanic eruption, considered to be the youngest on the planet, is also the youngest impact crater on Mars. The crater is 6 miles wide.

"The ages of the eruption and the impact are indistinguishable, which raises the possibility, however speculative, that the impact actually triggered the volcanic eruption," Moitra said.

Large impacts to Mars may have shaken up the subsurface magma, much like large earthquakes have been linked to volcanic eruptions.

Elysium may seem flat and boring, but it's no coincidence that this area is home to active Marsquakes, the planet's most recent water floods and lava flows -- and now, the most recent volcanic eruption.

"This may be the most recent volcanic eruption on Mars, but I think we can rest assured that it won't be the last," Andrews-Hanna said. "All these data seem to be telling the same story: Mars isn't dead."