Volkswagen's last Beetle to leave the factory this week 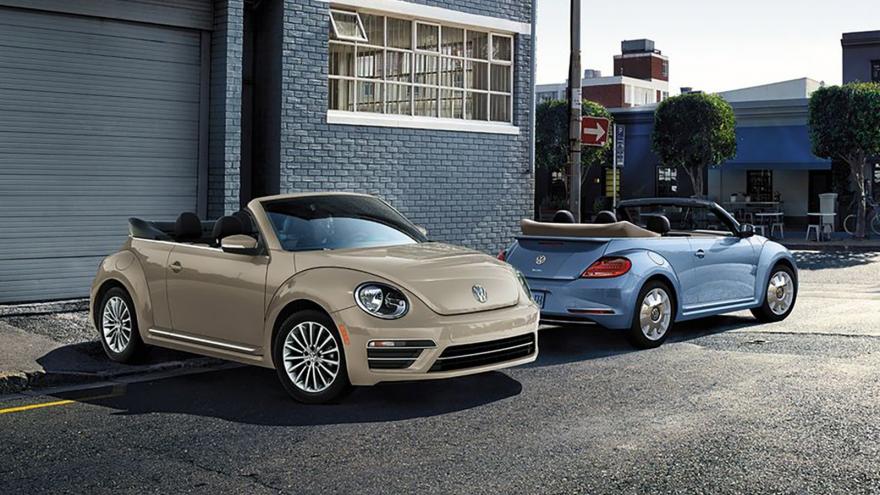 (CNN) -- After roughly seven decades of production and three generations of designs, Volkswagen is retiring its iconic Beetle.

The last bugs that VW will produce are set to roll off the assembly line in Puebla, Mexico, on Wednesday. The company will celebrate the Beetle's discontinuation with a ceremony at the factory.

The freed-up factory space in Mexico will be used to produce a new compact SUV intended for the North American market, the company said in a news release. The company declined to share further details about the new vehicle.

VW announced in September 2018 that it would manufacture a "Final Edition" Beetle series before ending production in 2019. It's available in convertible or hardtop, with base prices of $23,045 for a coupe and $27,295 for a convertible.

The Beetle had evolved significantly throughout its years of production.

Its legacy traces back to the 1930s, when Ferdinand Porsche, the prolific engineer behind the famed luxury vehicle brand, decided to design a "People's Car" — or "Volkswagen" in German. Porsche designed the vehicle at the behest of Adolf Hitler but the Volkswagen car didn't enter full production until after World War II.

Its fame was solidified with Walt Disney Productions' 1968 film "The Love Bug," which features an anthropomorphic Beetle named Herbie that makes a splash on the California racing circuit.

The original version of the Beetle, a rear-engine vehicle that owners often decked out in colorful paints during the flower power era of the 1960s and '70s, ended production in Mexico in 2003. More than 21 million were produced over the car's 65-year lifespan.

"It's impossible to imagine where Volkswagen would be without the Beetle," Volkswagen of America president and CEO Scott Keogh said in a statement. "From its first import in 1949 to today's retro-inspired design, it has showcased our company's ability to fit round pegs into square holes of the automotive industry. While its time has come, the role it has played in the evolution of our brand will be forever cherished."

Market trends have shifted drastically since the Beetle's heyday. Recently, consumers have been far more interested in SUVs and other spacious vehicles than compact cars.

"In this environment the business case for cars in general, and small cars in particular, becomes increasingly difficult to justify," Bauer said. "Anyone surprised or disappointed by this announcement better prepare themselves. In the months to come more automakers will be announcing more iconic model cancellations."

The final Beetle to roll off the assembly line will be displayed at a Volkswagen museum in Puebla, the company said.