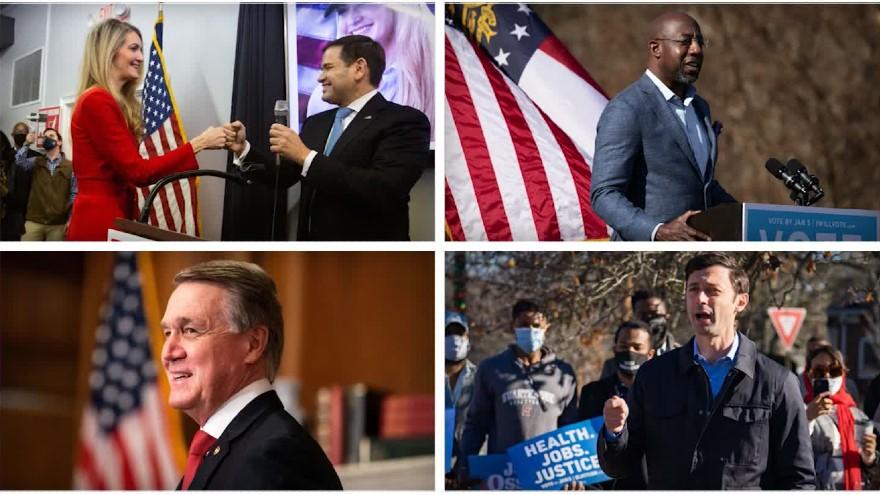 The Georgia US Senate races have attracted enormous attention due to the stakes for the first years of the Biden administration and the state\'s shift from red to purple. - Getty Images

(CNN) -- The polls for the two Georgia runoff races that will determine party control of the US Senate have closed and the ballot counting has begun, starting with the record-breaking 3 million-plus early votes.

The final days of the races were defined by President Donald Trump's refusal to concede his own election loss, sparking a fight within the Republican Party that imperiled Georgia Republicans Sen. Kelly Loeffler and David Perdue.

Since Trump lost the Peach State in November, his ongoing onslaught against the Republican officials in charge of the elections pressured the two GOP senators to make a choice: Join the President in seeking to overturn the democratic outcome or risk losing Trump supporters, some of whom have become disenchanted with the electoral process.

But despite three recounts and no evidence of widespread fraud, Loeffler and Perdue decided this week to join the President in objecting to Congress' certification of the Electoral College's results on Wednesday in a final, deluded display of devotion to Trump supporters.

"The American people deserve a platform in Congress, permitted under the Constitution, to have election issues presented so that they can be addressed," said Loeffler in a statement on Monday.

While Georgia is a rapidly diversifying state and former state House Democratic leader Stacey Abrams has led substantial voter registration drives for years, the Republican candidates came into the Senate runoff elections with an advantage.

Republicans hope their message that Georgia should be a check on Washington will prove successful, noting that if Warnock and Ossoff win, President-elect Joe Biden, House Speaker Nancy Pelosi and Senate Democratic Leader Chuck Schumer will be in charge.

"I think having Republican control of the Senate will bring people more comfort because the national Democratic Party is not aligned with Georgia," Eric Tanenblatt, who served as chief of staff to former Republican Georgia Gov. Sonny Perdue, told CNN.

Tanenblatt said that the state serving as a firewall against liberals will be a "big motivator" for suburban voters, although he acknowledged that some might be "turned off" by the audiotape of the Trump-Raffensperger call, first reported by The Washington Post.

"We're talking about the future of the country, and we can't just turn it all over to one party," said Tanenblatt. "That could be wishful thinking on my part. But I do think that that's going to be a big motivator."

But Republicans are worried that Trump's unwillingness to concede jeopardizes the party's hold on the Senate, even though the state has not elected a Democrat to the chamber since 2000.

Heath Garrett, a campaign manager for former Georgia Republican Sen. Johnny Isakson, told CNN that Trump's attacks on Gov. Brian Kemp and Raffensperger have been "counterproductive for trying to motivate grassroots, base Republicans to go vote," and said they've thrown Perdue and Loeffler "off message" in the final days of the campaign.

"Senator Perdue and Senator Loeffler are being whipsawed by the President on one side and by the Democratic money on the other side," he said.

Perdue and Loeffler had attempted to avoid the intraparty feud sparked by Trump by focusing on Ossoff and Warnock.

Perdue's closing message in a recent video is littered with attacks, saying that if Republicans lose, undocumented immigrants will vote, Americans' private health insurance will be "taken away," and Democrats will pack the Supreme Court and defund the police.

"We win Georgia, we save America," says Perdue to the camera.

The Democratic candidates counter that they would "demilitarize" rather than defund the police, create a legal pathway for undocumented immigrants and support a public option to decrease the number of uninsured. Neither Democratic candidate has advocated adding justices to the court.

They argue they would do a better job ending the health care crisis over the coronavirus, which has infected more than 20.8 million Americans and killed at least 354,000, in order to reopen the economy. They've pushed policy goals, including debt-free public college and a new Voting Rights Act. And they've attacked the Republican senators for their multi-million dollar stock transactions during the pandemic, alleging that they profited off it. The senators have denied any wrongdoing.

That special election has been particularly brutal, starting last year when GOP Rep. Doug Collins forced Loeffler into a race to the right. After no candidate received 50% of the vote, the runoffs turned even more vicious, as Loeffler portrayed Warnock an anti-police Marxist who would destroy America in the Senate.

"We have to have Georgians come out and vote because we know that Chuck Schumer's radical agents of change are Raphael Warnock and Jon Ossoff," said Loeffler on the campaign trail Monday. "They would defund the police. They would lock down our economy. And we have to make sure that we hold the line right here in Georgia."

Warnock has promoted his background from the Savannah projects to the pulpit of Ebenezer Baptist Church, Martin Luther King Jr.'s historic church in Atlanta, while firing back at Loeffler.

"Kelly Loeffler spends tens of millions of dollars to scare you," said Warnock in an ad. "She's trying to make you afraid of me because she's afraid of you. Afraid that you understand how she's used her position in the Senate to enrich herself and others like her. Afraid that you'll realize that we can do better."

Perdue, a 71-year-old former Fortune 500 CEO, has dismissed Ossoff, a 33-year-old media executive, saying the Democrat does not know how to create a job. At their debate in the fall, Ossoff called the senator a "crook" who was "fending off multiple federal investigations for insider trading" while attacking "the health of the people" who he represents. Perdue snapped back that the Democrat had worked for "the mouthpiece of terrorism and Communist China" -- claims Ossoff called "ridiculous."

The Georgia US Senate races have attracted enormous attention due to the stakes for the first years of the Biden administration and the state's shift from red to purple. Biden's victory in the state was the first for a Democratic presidential candidate since 1996. Dr. Charles Bullock, a University of Georgia political science professor, told CNN that the Senate elections could be the first in which urban Georgia casts more votes than rural Georgia.

"We've seen tremendous enthusiasm in the early voting numbers, both in person and by mail, and we know that while Democrats will have a lead when polls open ... Republicans are expected to have a strong Election Day," said Seth Bringman, a spokesman for Fair Fight Action, a voting rights organization founded by Abrams.

Political groups spent about $520 million to advertise in the two runoff races, according to Kantar Media/CMAG, more than $8 million per day. Republicans outspent Democrats by tens of millions of dollars.

With the Senate on the line, Trump rallied his supporters in northwest Georgia on Monday, while President-elect Joe Biden held an event in Atlanta.

Biden said electing Ossoff and Warnock would end the gridlock in Washington and allow Congress to provide $2,000 stimulus checks to Americans. Trump urged the state to elect Perdue and Loeffler, and claimed that Biden would not take the White House.

"We're going to fight like hell," said the President.