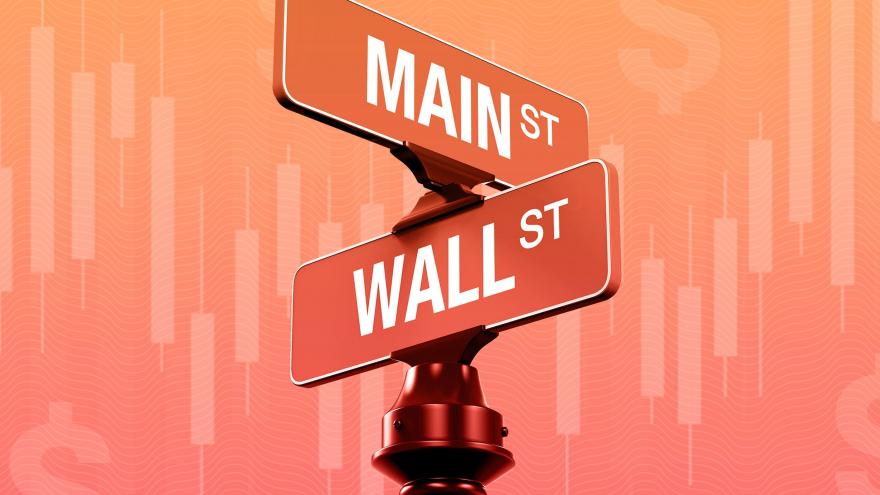 (CNN) -- The New York Stock Exchange and Nasdaq are hearing some footsteps behind them today.

A high-profile group of banks, brokerages and market makers revealed plans on Monday to join forces and start their own trading venue called the Members Exchange.

The launch of the new exchange, backed by power players like Bank of America Merrill Lynch (BAC), UBS, Citadel Securities and Fidelity Investments, underscores longstanding frustrations with the current system.

In particular, brokerages and market makers are upset with the cost that leading exchanges charge for access to the lucrative data feeds that are used to monitor stock prices.

"The level of frustration was just so high for many of us that we had to do something more proactive for us and our clients," Vlad Khandros, global head of market structure and liquidity strategy at UBS (UBS), told CNN Business. "There's this massive burden on us and our clients."

Members Exchange, or MEMX, aims to disrupt the exchange business, which is dominated by just a few small players. The goal is to simplify and lower fees by boosting competition and increasing transparency.

"They're saying, 'We're going to take our ball and start our own thing,'" said Joe Saluzzi, co-head of trading at New Jersey brokerage firm Themis Trading and author of "Broken Markets."

The new competition is likely to erode the ability of existing exchanges to keep ramping up fees on brokerage firms and market makers, especially for data feeds. These lucrative data feeds give financial players key insight on market movements. Fee structure can vary based on what types of data is being sought.

By charging hefty fees for access to that data, exchanges have found a way to juice revenue in recent years.

Members Exchange does not plan to compete with NYSE and Nasdaq on the separate business of listing stocks. NYSE and Nasdaq regularly vie for bragging rights to say they brought major private companies like Uber and Lyft public in splashy IPOs.

NYSE declined to comment on the launch of Members Exchange.

"We welcome competition to our transparent, highly regulated equity markets," Nasdaq spokesman Joseph Christinat, told CNN Business. "However, with dozens of equity trading venues already in operation in the United States, we are keen to learn more about the value proposition of a new exchange."

Although there may be many trading venues, the business is concentrated in the hands of a few powerful players.

Sixty-one percent of stock trades took place at just three exchanges in 2018: NYSE, Nasdaq and CBOE, according to research by TABB Group.

NYSE led the way, with nearly one-quarter of the market. Another one-fifth went to Nasdaq. The next-closest player was IEX Group, the exchange that was founded in 2012 in a bid to capitalize on concerns about high-frequency trading sparked by the Michael Lewis novel "Flash Boys."

While IEX has been slow to gain market share, MEMX could have a leg up. It will launch with the backing of financial heavyweights that can bring their order flow with them.

Brad Katsuyama, IEX CEO and co-founder, said Monday in a statement that IEX expects the industry will change "dramatically" in the coming years.

"This is the latest affirmation that the exchange business is rife with conflicts of interest and market participants can no longer tolerate the abuses of power," he said.

MEMX raised $70 million in an initial round of funding and hopes to add new investors at a later date, a person familiar with the matter told CNN Business. The group plans to file paperwork early this year seeking SEC approval to become a national securities exchange.

Still, Saluzzi suspects that mom-and-pop investors will see little change from the entrance of Members Exchange.

"Trading fees are already almost zero," said Saluzzi. "I don't think the regular investor will see any difference from this. It's purely profit-driven, which is fine."

One industry executive complained that some of the companies involved in the Members Exchange have been hit with lawsuits and fines for alleged equity trading violations.

For instance, last year Bank of America Merrill Lynch admitted to "systematically misleading clients" between 2008 and 2013 about how orders were handled for more than 4 billion shares of stock.

"They're letting the fox build the henhouse," the executive said.

Jamil Nazarali, Citadel Securities' global head of business development, disputed that argument by noting the diversity of the MEMX's backers.

"This is a very broad group of partners, including leaders from every aspect of the market," Nazarali said.