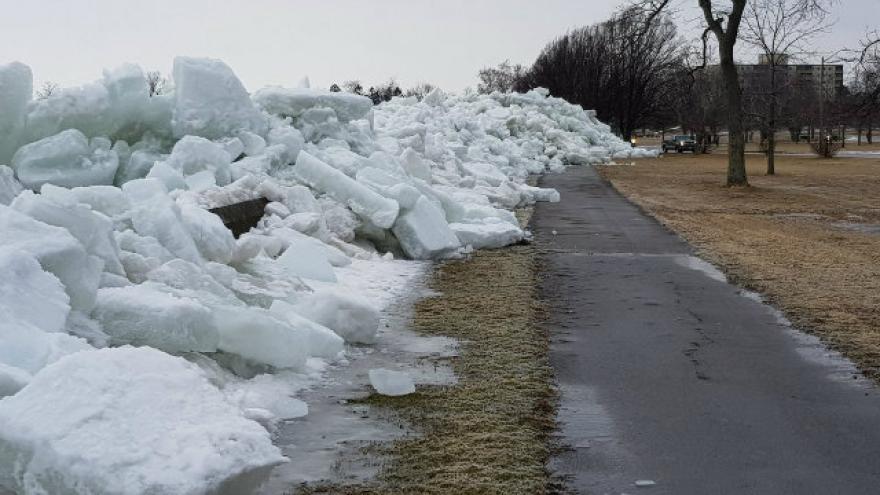 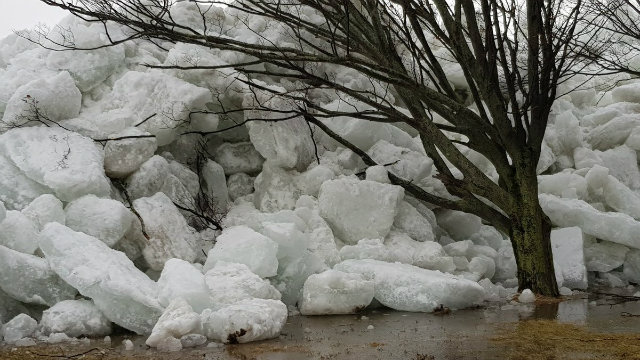 (CNN) -- Extreme winds from a huge weekend storm over the Great Lakes pushed huge walls of ice on the shores of Lake Erie.

Authorities in Ontario, Canada, closed the Niagara River Parkway near the Mather Arch in Fort Erie on Sunday because large chunks of ice were blowing over a retaining wall.

Storm chaser David Piano took pictures near the Peace Bridge, which connects Fort Erie and Buffalo, New York, and called it "one of the craziest things I've ever witnessed."

He said the ice had pushed about 150 feet inland and was "starting to bulldoze trees and street lamps" when he left the area.

Ice shoves are caused by wind, currents, changes in temperature and other factors that push ice onto shore.

The town of Hamburg, New York, which is south of Buffalo, issued a voluntary evacuation for Hoover Beach as the ice pushed closer to lakefront buildings.

Officials asked the public to stay out of the area and said that the Woodland Fire Department would be going door to door to check on residents.

The National Weather Service reported winds as high as 42 mph with gusts up to 62 mph on Sunday at the Greater Buffalo International Airport.

The storm has downed trees and knocked out power to as many as 625,000 people in the Great Lakes region and the Northeast.

New York Gov. Andrew Cuomo is scheduled to survey the storm damage and give a briefing on Monday afternoon.

More than 90 million people are under high wind warnings or wind advisories, including in Washington, Philadelphia and Boston.