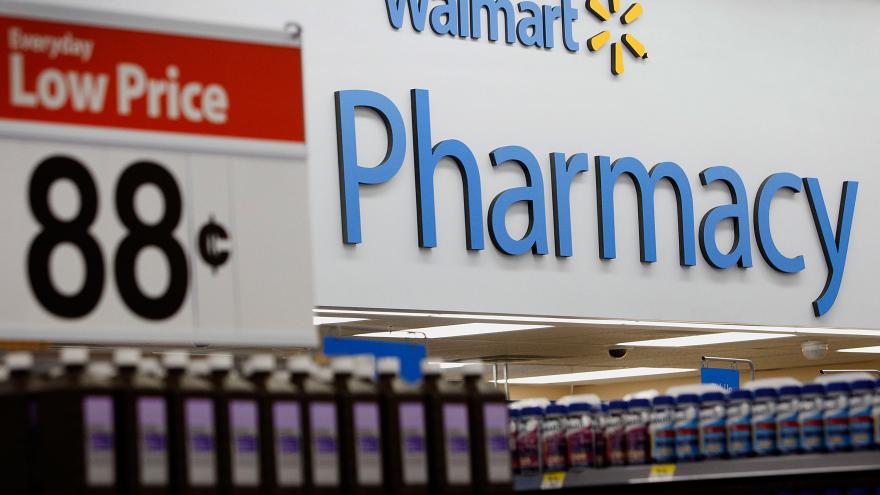 Originally Published: 22 OCT 20 19:38 ET
By Clare Duffy, CNN Business
(CNN) -- Walmart on Thursday filed a lawsuit against the federal government asking a court to clarify that the company and its pharmacists were not responsible for the distribution of improper opioid prescriptions.

The retailer said the suit is in response to threats of legal action by the Department of Justice and Drug Enforcement Agency to hold Walmart pharmacists responsible, in part, for the opioid crisis, according to a press release from Walmart. A spokesperson for the DEA said the agency does not comment on ongoing litigation, and the DOJ did not immediately return a request for comment.

The complaint, filed in US District Court for the Eastern District of Texas, could set up yet another legal battle involving a major American corporation over who is responsiblefor the opioid epidemic that has led to hundreds of thousands of overdose deaths in recent years. Walmart is the country's largest retailer, and it operates more than 5,000 in-store pharmacies in the United States.

"Walmart and our pharmacists are committed to helping address the opioid crisis that has affected so many," the company said in the release.

"Unfortunately, certain DOJ officials have long seemed more focused on chasing headlines than fixing the crisis. They are now threatening a completely unjustified lawsuit against Walmart, claiming in hindsight pharmacists should have refused to fill otherwise valid opioid prescriptions that were written by the very doctors that the federal government still approves to write prescriptions."

In its complaint, the company asks the court to "resolve a dispute" with the DOJ and DEA regarding the obligations of pharmacists under the Controlled Substances Act, the law that regulates the possession, use and distribution of certain medications and other substances.

If a pharmacist declines to fill a prescription written by a DEA-licensed doctor because of concerns about the doctor's judgement, the pharmacist would be making a decision without a medical license or knowledge of the patient, which could cause them to lose their license, Walmart states in the complaint.

"Because of this, Walmart and its pharmacists face state investigations and lawsuits for interfering in medical practice—that is, for going too far by refusing to fill opioid prescriptions," the complaint states. "And DOJ now has stated it will sue Walmart for not going far enough by continuing to fill opioid prescriptions of certain licensed doctors—many of whom are still authorized by DEA to prescribe opioids to this day."

The US Attorney's Office for the Eastern District of Texas began investigating Walmart's pharmacy practices in 2016, and informed the company in the spring of 2018 of plans to file an indictment, according to the complaint. Following a dispute from Walmart over the process, however, the DOJ in August 2018 declined to prosecute the company, the complaint states. ProPublica previously reported on the the DOJ's decision not to pursue the case.

Walmart in its complaint states that the DEA, rather than pharmacists, should be responsible for evaluating doctors who prescribe opioids, and ensuring they do so correctly.

In its request for relief, Walmart asked the court to make several declarations regarding the Controlled Substances Act, including that pharmacists are not required to second-guess a licensed doctor's decision about a prescription, and that pharmacists are not required by the law to document in writing why filling a prescription was appropriate, according to court documents.

"Walmart and our pharmacists are torn between demands from DEA on one side and health agencies and regulators on the other, and patients are caught in the middle," the company said in a statement. "We need a court to clarify the roles and legal responsibilities of pharmacists and pharmacies in filling opioid prescriptions."