Want good luck in the new year? Make yourself a lemon pig 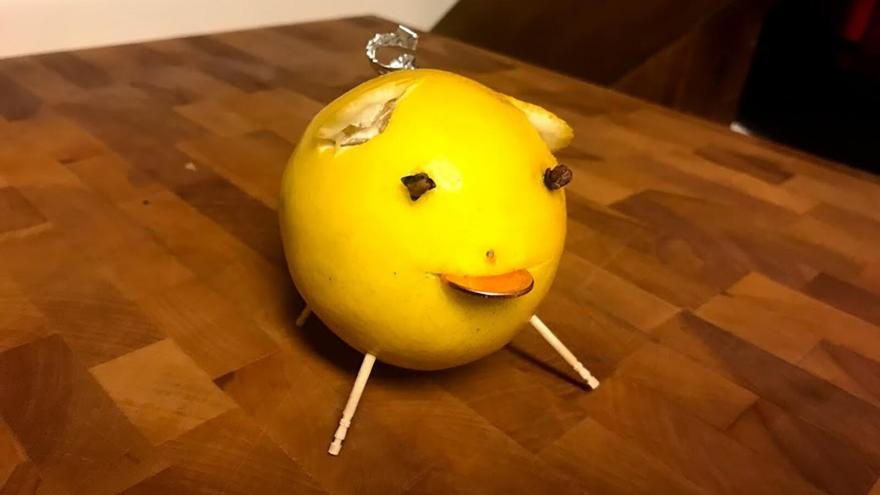 Lemon pigs may or may not be good luck charms. But looking ahead to 2021, a little luck wouldn't hurt.

(CNN) -- At the end of the dank, dark tunnel that was 2020 comes light -- a bright yellow, pungent light with toothpick legs and a penny in its mouth.

Lemon pigs -- edibly fashioned out of lemon rinds -- were popular tabletop trinkets in the late 19th and early 20th centuries, then faded into obscurity and were resurrected in 2017 when a cookbook author discovered an image from a retro party planning book sponsored by a major aluminum company.

It's believed -- according to said cookbook -- that these lemon pigs will bring good luck or, at the very least, look adorable on your kitchen table.

True, the lemon pig's origin story isn't an epic one. It's true, too, that it's just a lemon skewered on four toothpicks and resembles a kindergarten science experiment.

But anyone can make it if they've got a lemon on hand. It can outlive real swine and other kitchen citrus. And if we've ever needed a dose of extra luck, now's the time.

How the lemon pig made a comeback

The lemon pig recipe that briefly entertained Twitter surfaced in 2017, when cookbook author Anna Pallai reposted it from the blog Granny Pantries, which is devoted to digging up garish recipes from vintage cookbooks.

This recipe came from the 1971 book, "401 Party and Holiday Ideas from Alcoa." Alcoa stands for Aluminum Company of America, so naturally, many of the ideas incorporate foil.

But the only piece of aluminum on the 1971 lemon pig is its curlicue tail. Its eyes are cloves, it stands on four toothpicks and a little slit cut for its mouth holds a penny.

"For good luck in the New Year, a lemon piglet is a must!" the description reads.

What about the lemon pig is lucky, though? Surely the Aluminum Company of America didn't absentmindedly toss in a line about the pig's powers with little evidence.

Twitter, always hungry for a weird fad to glom on to and then immediately forget about, did just that. Hundreds of users created their own lemon pigs, but few followed up on whether the pig brought them any luck.

Perhaps, then, its origins would reveal more clues about the pig's purported powers.

An abbreviated history of the lemon pig

In its earliest mentions, lemon pigs served as little more than a tabletop ornament meant to amuse and surprise children and some whimsical adults.

The lemon pig pops up a bit in early 20th-century literature. In Carolyn Wells' "Patty's Social Season," published in 1913, the eponymous Patty is perplexed by the lemon pig, one her suitor made with matches for legs and pins for eyes. The verdict? It "was an exceedingly comical pig." No mention of the luck it was purported to bring.

An even earlier mention of a lemon pig appears in Frank Bellow's "The Art of Amusing" from 1865. He doesn't describe how the pig was made, just that it delighted children. Once again, no mention of luck.

The 19th President of the US, Rutherford B. Hayes, received a lemon pig from a citizen during his time in office in the late 19th century. The pig, its rind body brown and withered, survived over 100 years and was displayed in the Jimmy Carter Presidential Library and Museum -- perhaps the best evidence that lemon pigs might carry some luck, or at least longevity.

The verdict on the lemon pig's luck

The portly lemon pig's origins are decidedly luckless, its "powers" likely a myth conjured up by an aluminum company to sell more foil. But people put their faith in trinkets and knickknacks all the time -- why can't the lemon pig be somebody's lucky charm?

If you're so inclined, give the lemon pig a chance (instructions follow below). If nothing else, it'll brighten up your kitchen and smell good for a few days. And if the pig starts to spoil, at least its moldy deterioration is a fitting sendoff to a most difficult year.

How to make your own lemon pig

1. Select a plump lemon you wouldn't mind poking some holes into.

2. With a knife, slit a mouth on one end of the lemon (this is where you'll stick that penny).

3. Above both sides of the mouth, shave two round ears into the rind with a knife.

4. Jab two black peppercorns or cloves into the rind above the mouth -- these are its fragrant eyes.

5. Stick four toothpicks into the bottom of its lemon body for its legs.

6. Twist a piece of aluminum foil into a curly pig tail and push it into the other end of the lemon.