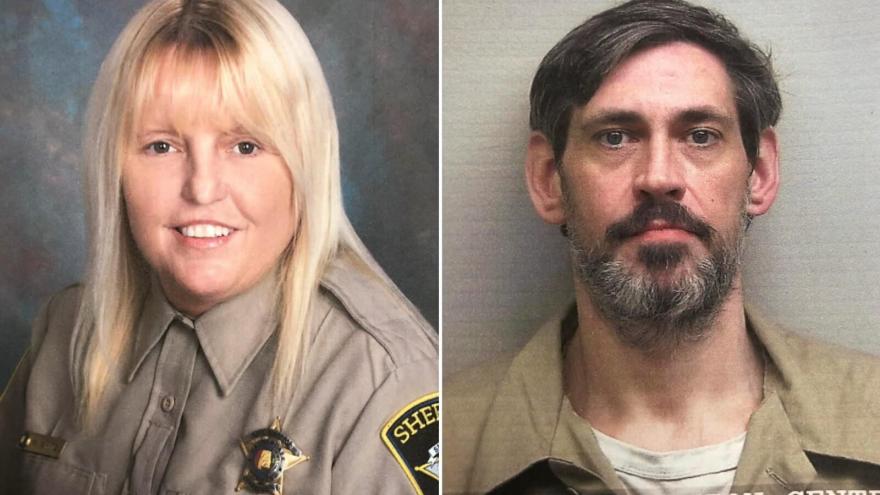 (CNN) -- An Alabama corrections official who was last seen with a man held on murder charges now has a warrant out for her arrest.

A warrant was issued for Vicky White, an assistant director of corrections for Lauderdale County, on charges of permitting or facilitating escape in the first degree, Lauderdale County Sheriff Rick Singleton said.

Vicky White was last seen Friday when she said she was taking inmate Casey White for a mental health evaluation at the county courthouse. No evaluation or hearing was scheduled for the inmate that day, authorities later found.

The video shows the car stopped at an intersection eight minutes after it left the jail. The intersection is about two blocks from the shopping center parking lot where the car was later found abandoned, Singleton said.

"What that tells us is that the patrol car left the detention center and went straight to the parking lot" where it was abandoned and later found by officials, the sheriff said. "There was not enough time for them to even attempt to try to come to the courthouse."

It now looks likely Vicky White acted of her own free will, the sheriff said.

"If she did this willingly, and all indications are that she did," Singleton told CNN's Ryan Young. "I guess we're trying to hold on to that last straw of hope that maybe for some reason she was threatened and did this under coercion... but absolutely you'd feel betrayed," Singleton said Monday.

"All of her co-workers are devastated. We've never had any situation like this with Vicky White. She was a model employee," Singleton told Young.

Shortly before her disappearance, Vicky White said she had also planned to get medical care because she wasn't feeling well, Singleton said. But she never arrived.

Video security footage in the area where the patrol vehicle was found didn't turn up any evidence showing what happened to the two, the sheriff said.

"We're still aggressively pursuing every lead that we get," he said. "The biggest obstacle we have right now is we still do not have a vehicle description for whatever vehicle they may have transferred into."

No evidence of a romantic relationship, but 'it's a possibility'

Vicky White was known as an "exemplary employee" with "an unblemished record," the sheriff said.

"All of her co-workers, all the employees in the sheriff's office, the judges, all have the most utmost respect for her," Singleton said.

The corrections officer is a widow with no children, and her mother and two brothers live in Lauderdale County, according to the sheriff.

After about two decades with the department, Vicky White submitted her retirement papers last week, the sheriff said. The day she and Casey White disappeared was supposed to be her last day at work, Singleton said Monday.

She had talked about retiring for three or four months before Friday's incident, sold her home about a month ago, and thought about moving to the beach, the sheriff said.

Vicky White recently sold her house and had been living with her mother for the past five weeks but didn't mention retirement, the mother, Pat Davis, told CNN affiliate WAAY.

The corrections officer would have had money from the recent sale of her house, the sheriff said, but her retirement fund paperwork had not yet been processed.

Despite her stellar professional reputation, Vicky White violated protocol Friday when she removed Casey White from the detention center by herself, the sheriff said. The policy required Casey White to be escorted by two sworn deputies.

"All precautions were in place," Singleton said. "The questions we have for Director White is why she violated policy."

The sheriff said there's no clear evidence as to whether Vicky White and Casey White had a personal relationship.

As the county's assistant director of corrections, Vicky White "was frequently throughout the cell blocks, has contact with all the inmates at one time or another," Singleton said.

"But as far as a romantic relationship or something like that, we have no evidence or proof that that was the case, although it's a possibility."

'She's definitely in danger -- willingly or not'

Casey White was serving 75 years for a series of crimes in 2015, including a home invasion, carjacking and a police chase, according to the US Marshals Service, which is now leading the investigation into the disappearance of the inmate and Vicky White.

Casey White also faces two counts of capital murder for the stabbing death of 59-year-old Connie Ridgeway in 2015, the US Marshals said.

In 2020, Casey White confessed to the killing and then pleaded not guilty, Lauderdale County District Attorney Chris Connolly said.

The Alabama Corrections Department website lists Casey White as an inmate at the William E. Donaldson Correction Facility in Jefferson County. He had been transferred to the Lauderdale County detention center in February for court appearances in the murder case, according to Singleton.

Now, with the murder suspect at large and the corrections official missing, "The community of course is concerned, as are we," Singleton said.

"She's definitely in danger, willingly or not. This guy's no one to mess with," the sheriff said.

The US Marshals Service is offering a reward of up to $10,000 for information leading to the location of Vicky White and the capture of Casey White.

"You shouldn't try to approach either one of these individuals because we consider both of them dangerous, and in all probability, both individuals are armed," US Marshal Marty Keely said Monday.

In 2020, Casey White planned to escape the jail and take a hostage, but detention center employees caught him, Singleton said.

The prison then established a policy mandating two sworn deputies accompany him at all times, including during transportation to the courthouse, the sheriff said.

"He was in jail for capital murder, and he had nothing to lose," the sheriff said.

"Whether she assisted him or not, we don't know. And we won't address that until we have absolute proof that that's what happened. We are assuming at this point that she was taken against her will unless we can absolutely prove otherwise. But regardless, even if she did assist him, we think she's in danger."

Davis, Vicky White's mother, is in a state of shock, she told WAAY.

"As a mother, I didn't know how to act because I thought at first it was a mistake," Davis said. "And then when I found out for sure it was, it was just disbelief."

The mother said her daughter didn't talk much about work and never spoke about Casey White.

"I didn't know anything about him," Davis said. "We don't know if she was took by force or if she was voluntarily in this. But we just want her back. That's all we want."

Correction: An earlier version of this story included the wrong age for Connie Ridgeway; she was 59 when she died.