Warren and Sanders agree to disagree over content of 2018 meeting 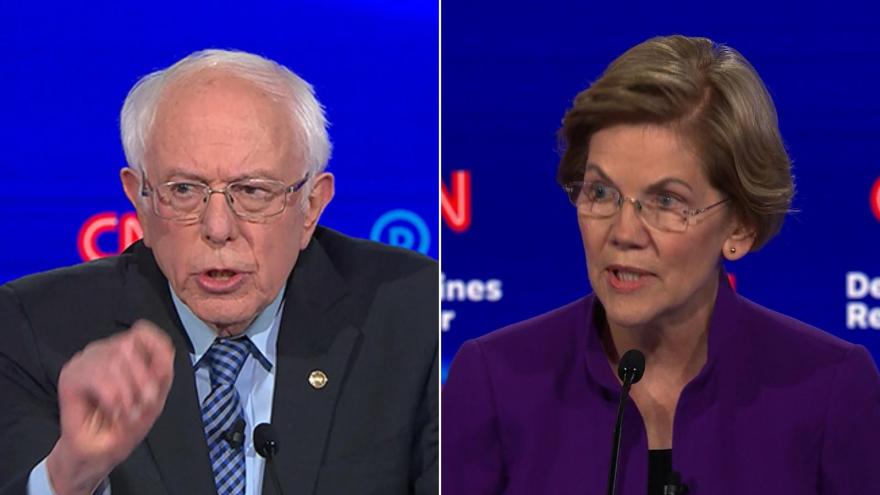 Democratic primary rivals Elizabeth Warren and Bernie Sanders agreed to disagree on the contents of a private 2018 dinner during Tuesday's primary debate.

(CNN) -- Democratic primary rivals Elizabeth Warren and Bernie Sanders agreed to disagree during Tuesday's primary debate on the contents of a private 2018 dinner conversation, punctuating a growing tension between the two leading 2020 progressives over whether Sanders had told Warren that a woman could not win during a discussion about the 2020 election.

After Sanders again denied having made the remark Tuesday night, Warren -- who has confirmed what four sources told CNN about the meeting -- stood by her account and again said that she "disagreed" with Sanders' assessment before pivoting to an argument underscoring the electoral prowess of the female candidates on the debate stage.

"But look, this question about whether or not a woman can be president has been raised and it's time for us to attack it head-on," Warren said. "I think the best way to talk about who can win is by looking at people's winning record. So, can a woman beat (President) Donald Trump? Look at the men on this stage: Collectively, they have lost 10 elections. The only people on this stage who have won every single election that they've been in are the women."

Warren's forceful response came after Sanders pointed to his past remarks, and the run-up to the 2016 primary, as evidence he believes a woman can be president.

"I don't want to waste a whole lot of time on this because this is what Donald Trump and maybe some of the media want," he said.

"But anybody who knows me knows that it's incomprehensible that I would think that a woman could not be president to the United States," Sanders added.

Heading into Tuesday night's debate, the pair had sought to refocus the conversation on their core messaging, but a moment caught on camera following the end of the debate suggested tension between the progressive colleagues.

"I'm not sure what she said, but you can read the body language. Obviously their conversation was not pleasant," Sanders campaign co-chair Nina Turner said of the exchange.

Warren and Sanders are competing to emerge as the standard-bearer for progressives in the Democratic primary fight. The two had made careful efforts to manage their friendship and political rivalry before the 2020 race was officially underway and had largely avoided publicly sniping at each other.

The bust-up began on Sunday after Politico reported that some volunteers for the Sanders campaign had been given talking points suggesting that Warren's support did not extend beyond "highly educated, more affluent people." Asked about it later in the day, Warren accused Sanders of "sending his volunteers out to trash me."

"We all saw the impact of the factionalism in 2016, and we can't have a repeat of that," Warren said. "Democrats need to unite our party."

The tit-for-tat continued into Sunday evening, when Warren's campaign sent out a fundraising email signed by campaign manager Roger Lau that echoed Warren's comments and told supporters "we need a nominee who can unite a broad coalition of Democrats."

Then, four sources told CNN that during a private 2018 meeting, Sanders said to Warren that he did not believe a woman could win during a discussion of the 2020 election. The controversy raised fresh questions about the importance of identity politics in Democratic politics amid ongoing accusations that the top of the party's field isn't sufficiently diverse.

In a statement, Sanders denied having made the comment, describing those sources' account as "ludicrous" and calling it "sad that three weeks before the Iowa caucus and a year after that private conversation, staff who weren't in the room (for the meeting) are lying about what happened."

After a few hours of silence, Warren publicly verified what sources told CNN, saying of the 2018 conversation with Sanders: "I thought a woman could win; he disagreed," before affirming their friendship and seeking to reassure voters that their political alliance remained strong. Meanwhile, Sanders campaign manager Faiz Shakir tweeted a video of Sanders attacking Trump, urging followers to "stay focused."

Now within three weeks the Iowa caucuses, Warren is the only woman polling in double digits nationally. A recent CNN/Des Moines Register/Mediacom poll showed Warren in a four-way race with Sanders, former South Bend, Indiana, Mayor Pete Buttigieg and former Vice President Joe Biden. In that survey, Sanders and Warren performed nearly equally well as the top choice among female likely Democratic caucusgoers, while Sanders and Buttigieg were the top choice among men.

Ahead of the debate, the campaigns -- following an outcry from unaligned progressive leaders -- sought to take the edge off the conversation and refocus the discussion, and campaign aides and surrogates signaled to reporters that there would be no debate stage drama.

Seconds after the debate ended, Warren was seen shaking hands with businessman Tom Steyer and Biden, but when Sanders extended his hand, Warren didn't take it. Instead, she appeared to engage him in conversation.

It's unclear what they were discussing.